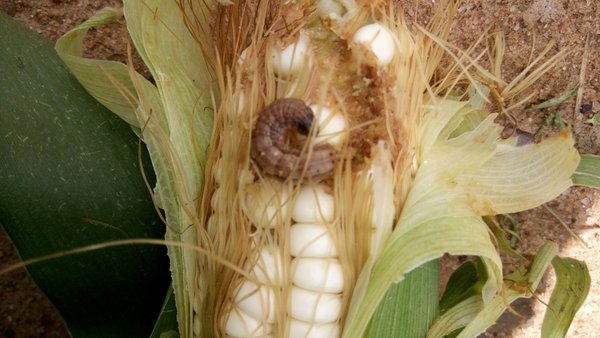 Fall armyworm outbreak is threatening food security in southern Africa that is reeling from the effects of consecutive droughts. This pest is relatively new to the African continent; in the past it occurred mainly in the Americas.

A fall armyworm outbreak, the first emergence of the pest in southern Africa, is causing considerable crop damage in some countries, the Food and Agriculture Organization of the United Nations (FAO) reported in February 2017.

If the pest damage aggravates, it could dampen prospects for good crop harvests anticipated in the current farming season. Maize, a staple food in the region, has been the most affected, as well as other cereals including sorghum, millet and wheat.

According to FAO experts, preliminary reports indicate the possible presence of the pest in Malawi, Mozambique, Namibia, South Africa, Zambia and Zimbabwe.

Fall armyworm is a relatively new pest from the Americas, whose presence on the African continent was first reported in Sao Tome and Principe around January 2016. The pest is known to cause extensive crop losses of up to 73 per cent depending on existing conditions and is difficult to control with a single type of pesticide, especially when it has reached an advanced larval development stage.

Preparedness and rapid response are crucial

They identified gaps in the region’s early warning systems, response, preparedness, contingency planning, including information dissemination and effective regional coordination. The meeting proposed a number of interventions to close such gaps and to boost critical research areas which can provide a better understanding of the pests and diseases that pose threats to plants or animals.

FAO said it will support countries in close collaboration with the Southern African Development Committee (SADC) and other partners and stakeholders to implement the necessary assessment activities aimed at improving understanding on the extent and intensity of the fall armyworm threat to the region.

These activities will also serve to mobilise the required resources including human expertise and funding. Meanwhile, countries were also encouraged to roll-out awareness campaigns targeting farmers, extension workers and other stakeholders.

FAO has initiated the process of procuring pheromone insect lure traps to capture the armyworm and monitor their spread.