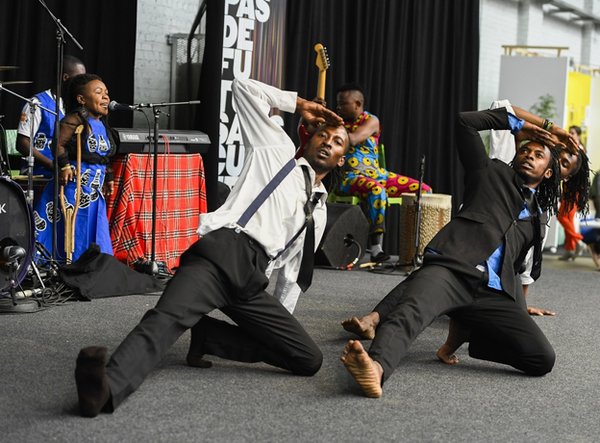 Cultural programme at EDD 2016: ‘The Jumping Village’ presents the consequences of land grabbing in Africa. The performance is part of the Art against poverty project funded by ACPCultures+.
Photo: © European Union

This year, the European Development Days celebrated their tenth anniversary. The three-day event in mid-June 2016 focused on the implementation of the 2030 Sustainable Development Goals agenda.

At this year’s tenth edition of the European Development Days in mid-June 2016 in Brussels/Belgium, a total of 15 topics were addressed by 120 sessions and numerous side events. The topics were dedicated to the five “Ps” that the Sustainable Development Goals focus on: People (inequalities / gender / leave no-one behind), Planet (climate change / circular economy / water-energy-food nexus), Prosperity (inclusive, sustainable and resilient cities / science, technology and innovation / trade, growth and sustainable development), Peace (Working with fragile states / migration and refugees / inclusive and peaceful societies), and Partnership (means of implementation, ensuring accountability / engaging the private sector).

The conference was opened by the Vice-President of the European Commission, Federica Mogherini, who defined the framework of the event. Mogherini stated that Africa’s domestic product had more than doubled in the past ten years; since the beginning of the new millennium, the number of people living in extreme poverty had been halved.
In Asia, numerous rising powers were creating wealth and innovations for millions of people. The flipside of the coin was that inequalities were on the rise, instability was soaring and tens of millions of people were on the move, fleeing from war zones or seeking opportunities for a better life. It was Europe’s duty to face these threats. However, Mogherini stated: “We also have a moral obligation to unlock the world’s potential for growth and development.” This was also the most powerful way to prevent future crisis. Here, the Sustainable Development Agenda assumed centre stage.

Representatives of various countries then presented an initial overview of how the implementation of the SDGs was working and where they were reckoning with success. Here, it became clear that tackling climate change was central to the ability of many countries to achieve the SDGs. Therefore, the Paris climate change agreement had to be entered into force quickly, the panellists demanded unanimously.

Security represents an equally immediate threat to achieving the SDGs as well as a prerequisite for development. Only when a country is stable, its justice is free from corruption and the police and armed forces protect its citizens and democratic institutions can business prosper, create jobs and unlock the potential for growth and development.
For security and stability to be achieved, resilience, democracy and human rights were essential, the participants noted. In addition, they emphasised that in addition to the five Ps that Agenda 2030 focuses on, another P was important: the P of Power. Civil society was bringing people power. This power – and not only the power of men, but above all also the power of women and young people – had to feed into the development equation, they insisted.

The significance of tackling climate change as the basis for the prospects of countries to achieve the SDGs also featured in many of the other sessions. Here, the key importance of the resource water was stressed again and again, as was the threat of water scarcity, an aspect emphasised by a recent World Bank publication. Water scarcity is a source of conflict but also leads to co-operation. The discussion highlighted the value of resource management agreements such as transboundary river commissions and tools like the Water Convention of the United Nations Economic Commission for Europe (UNECE).

The close links between aspects of the water-energy-food nexus were underlined by the example of hydropower dams that both manage the water supply and generate electricity. In addressing energy, financing aspects play a major role. Whereas subsidies to encourage change were not bad per se, policy-makers needed to be mindful of unintended consequences, the participants of the “water-energy-food nexus” sessions stressed. They referred to the example of the cheap price of energy, which was giving an incentive to the use of fossil fuels. Innovative financing solutions were required regarding the energy needs and opportunities along the agri-food value chains, too.

This also applies in particular to Africa, where there are many instances of start-up companies coming into the market to provide energy services. Since local banks are risk-adverse and are not supporting the enterprise economy, there is clearly a need for alternative or public funding mechanisms. Small financial injections – in the form of concessional loans – at low or zero rates of interest could get business going and give commercial lenders confidence to engage in such business in the future, the participants stated.

Towards a circular economy

The 2030 Agenda for Sustainable Development also aims for a resource-efficient economy. For example, the European Union currently imports more raw materials than it produces. The EU’s Circular Economy Package, published in December 2015, is to close this loop. It looks at waste as an opportunity, not a liability, as Karmenu Vella, EU Commissioner for Environment, Maritime Affairs and Fisheries explained in the session “Towards a circular economy for sustainable consumption and production”. It is estimated that global waste volumes will treble by 2025, with most waste coming from developing countries.

Waste left unmanaged in landfill sites leads to serious health issues for the local population. And according to a recent report, by 2050, there will more plastic than fish in the seas – a result of poorly run or unmanaged landfilled sites. These ought to be good conditions for a thriving recycling industry. Here however, it has to be considered that it may be more expensive for companies to recycle than to use virgin products. The participants of the session also noted that it was vital to work with the local population, above all the so-called waste pickers, to find long-lasting solutions for waste management in emerging and developing countries.

One positive example came from South Africa, a country which has millions of waste tyres lying in dumps and stockpiles. The South African government has mandated the company Redisa to recycle these tyres and create jobs across the country. After just two years, some 2,700 people were now employed by the company, and more tyres were now being recycled than produced, Redisa CEO Hermann Erdmann reported. The company was also investing in research and development to help stimulate the market for waste tyres. Erdmann is convinced that this model could be used in a multitude of other industries as well.

In Senegal, five million people have no access to electricity. The young Belgian social entrepreneur Ruben Baumer has set up a company that provides solar kits to the local population. The residents are also given access to finance through a local microfinance institute and via mobile phone banking. One hundred families, each with around ten members, have already been provided with the solar kits. This promising success has prompted plans to expand. However, Baumer pointed out that in many developing countries, there was not much support for entrepreneurs, and that this had to change. The participants agreed that education, industrial co-operation and citizen empowerment were important in increasing awareness about the circular economy and making the transition to a new model for sustainable consumption and production.

How should all this be financed?

With a view to finance for development, the European Union, as well as Member States' agencies, are now putting their hopes on a new financing instrument called blending. It stands for the combination of EU grants with loans or equity from other public and private financiers. The idea is that the EU grant element is used to attract additional financing for important investments in EU partner countries. This is also a key element of the New Migration Partnership Framework, which was announced by the European Commission in the week before the European Development Days.

Its long-term aim is to help third countries' development, thus addressing the root causes of irregular migration. For this purpose, a mix of short-term resources and long-term financial instruments is to be applied to deliver immediate results but also to address fundamental drivers of migration. In autumn 2016, the Commission plans to make a proposal for a new Fund as part of an External Investment Plan, modelled on the EU's Fund for Strategic Investment (EFSI), in order to mobilise investments in developing third countries. The External Investment Plan is to also focus on targeted assistance to improve the business environment in the countries concerned.

Regardless of the type of financing applied, transparency, good governance and impact assessments remain essential. To update the traditional way of measuring and monitoring development funding, which just took the Official Development Assistance (ODA) into account, the Organisation for Economic Co-operation and Development (OECD) has proposed a new mechanism that was presented by Mario Pezzini, Director of the OECD Development Centre. Provisionally named “Total official support for sustainable development” (TOSSD), it aims to gauge the real engagement of new instruments and their compatibility. To achieve this, it would be looking at the leveraging and catalytic effect of ODA, the use of blended finance packages and the application of innovative risk mitigation instruments in development co-operation, Pezzini said.

Much remains to be done

In the closing panel, the UN Special Adviser on the 2030 Agenda for Sustainable Development, David Nabarro, emphasised the opportunity of the tenth anniversary edition of European Development Days (EDD) to bring out the importance of interpreting the interconnected tapestry of 17 Sustainable Development Goals (SDGs) for the world's people and the planet. The EDD 2016 underlined how the goals were relevant for everybody everywhere, the urgency of starting implementation right now as well as until 2030 and beyond, through multilateral partnerships, leaving no-one behind, he said.

However, critical issues were also raised. Charles Goerens, Member of the European Parliament, expressed his concern that having spoken to many participants at the conference, he was far from certain that it was possible to reach agreement on a single definition for development and co-operation. He also expressed his disappointment at the attitude of some EU Member States with regard to welcoming refugees and making efforts to reach the 0.7 per cent target for aid; he hoped to see the European Parliament holding them to account in the future.

Oxfam International Executive Director Winnie Byanyima called on the EU to tackle the loss of revenue to tax havens through international co-operation and on developing countries to levy more progressive taxation. She also questioned the need to use public money earmarked for eradicating poverty to leverage private investments and the morality of tying aid to migration control.

Ethiopia’s Prime Minister Hailemariam Desalegn Boshe stated that European investors were more risk-averse than their Asian counterparts. This meant that funds for risk-sharing were essential to bring in European investment to create the jobs that would eradicate poverty and discourage young people from risking their lives as migrants. He stressed that the move from aid to trade and investment was the policy that Africa wanted to pursue. His comments were echoed by Faustin-Archange Touadéra, President of the Central African Republic, who emphasised the importance of reducing the desire to emigrate through job creation.

Closing the conference, the European Commissioner for International Cooperation and Development, Neven Mimica, stressed that the EU would play a proactive strategic role, gearing all policies towards the SDGs and renewing the Cotonou Agreement. He pointed to the afore-mentioned external investment plan of 3.1 billion euros, which is expected to trigger investments of up to 31 billion euros. Sustainable energy, focusing on renewables and innovative financing mechanisms continued to be the top priority of the EU Commission’s policy, Mimica said and confirmed that gender equality and the empowerment of women and girls would be mainstreamed in all its external actions. “We are committed to taking this journey with all of you until we reach the SDGs,” Mimica stated.