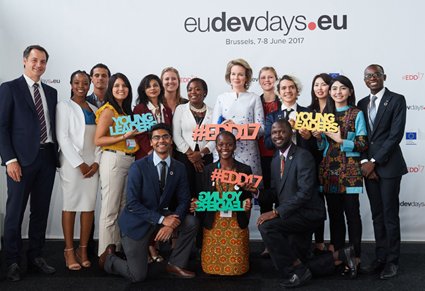 Alexander De Croo, Deputy Prime Minister of Belgium, and Mathilde, Queen of the Belgians, with young leaders from all over the world.
Photo: ©European Union

'Investing in Development' was the motto of the European Development Days 2017. More than 8,000 participants from the international development community shared information and views on challenges and approaches in achieving Agenda 2030.

'Investing in Development' was the motto of the eleventh European Development Days, which were run by the European Commission in Brussels, Belgium, early in June. More than 8,000 participants from the international development community shared information and views on challenges and approaches in achieving Agenda 2030 in around 120 sessions. The panel discussions, lab debates and brainstorming sessions centred on three themes: ‘Investing in People and Planet’, ‘Investing in Prosperity’ and ‘Investing in Peace and Partnership’.

Opening the event, the heads of state and the UN representatives focused on five key topics: commitment to the Sustainable Development Goals with their mandate to leave no-one behind, sticking to the Paris Climate Agreement, the need to raise the potential of the private sector in order to sustainably finance development, the need of women empowerment and gender equality and – again and again – the demand to see to it that the millions of young people surging onto the labour market today and in the coming years be given a perspective for the future.

Skills and participation for young people

The problem is particularly serious in sub-Saharan Africa, the region with the youngest population in the world. Here, 18 million jobs must be created each year to absorb new labour market entrants. If this is not achieved, there will be a danger that young people try to make it elsewhere – at best as labour migrants in Europe, and at worst as members of extremist organisations. "African leaders hold the responsibility to create the conditions enabling young people to stay," Malawi’s President Arthur Peter Mutharika reminded his colleagues.

This above all also includes imparting young people with the necessary skills and abilities for the labour market. But according to Apiyo Okwiri, President of the Erasmus Mundus Students and Alumni Association, Africa’s education system is "a little bit behind", and would need changes to achieve this. Okwiri stressed the need to find cross-country solutions enabling students to move and gain experience in other countries. "You learn best what you see for yourself,"she told the meeting.

However, skills are just one side of the coin. Often, young people do not know what to expect on the labour market. This is why global player Nestlé launched its Global Youth Initiative in 2014 and offers traineeships and apprenticeships. "Today, many young people already hold a Master’s degree, but do not know a thing about the working life. They are supposed to see that working for us has long had nothing more to do with the old way of producing that they may still have notions of," explained Frédérique Naulette, Project Manager of the initiative, in the session 'Empowering young people through better skills and better representation’. But young academics have also been mentoring Nestlé senior leaders in digital skills, for example on how to use a twitter account. Not everybody was really happy,"Naulette noted grinning, given the shift in hierarchies this involved. But a winwin situation was certainly created.

Tibor Navracsics, EU Commissioner for Education, Culture, Youth and Sport, urged that the perception of education not be confined to formal institutions. "The most useful skills often do not come from classrooms, but from peer groups, the neighbourhood, the social environment," Navracsics noted. What counted was to create a favourable social environment for the young people in which they had the opportunity to develop their personality. And one that also allowed them to become involved in political processes.

Currently, a mere two per cent of parliamentarians world-wide are under the age of 30. How can the voice of young people gain a greater audience? Côte d’Ivoire for example, which has its own Ministry of Youth, had set up a Conseil National des Jeunes (National Youth Council) in which all of the country’s youth facilities were represented, Youth Minister Sidi Tiémoko Touré noted. Romain Schneider, Minister for Development, Cooperation and Humanitarian Affairs in Luxembourg, called on politicians to focus more on the youth parliaments which now exist in many countries.

Leonardo Páarraga, one of 16 selected Young Leaders whom the EU Commission had invited from all over the world to share their views and experiences, advised young people to become engaged in social businesses. Not only has this young Colombian co-founded several initiatives helping young people acquire and develop key skills for their future careers, but he has also helped set up some to support the reconciliation process in the context of the peace agreement with the guerrilla movement FARC. He recommended young people: “When you see a problem in your community, you can trigger a change. Political leaders will then lend you an ear, even if you are not one of them.”

Bridging the digital divide in Africa

Digital technologies and services can foster sustainable development and inclusive growth. But a major share of people across the world cannot make use of these technologies – for example because they have no access to the Internet, a state of affairs that affects half of the world’s population. Africa in particular is lagging behind. This is also, but not only, a problem of connectivity. For the technology solutions for bringing connectivity to the continent exist, as the participants of the session ‘Bridging the digital divide in Africa’ stressed. Shortcomings regarding fair competition, transparency and stable regulation certainly were keeping many enterprises from investing. Red tape also represented a major hurdle. However, the basic problem lay elsewhere. “We have to convince the governments what digitisation brings in terms of benefits. Often, there is not sufficient awareness that digital development is important for the country,” said Michel Reveyrand, who is in charge of international relations at the French mobile phone company Orange.

This does not apply to Uganda. This country has even had its own Ministry of ICT since 2006. According to Minister Frank Tumwebaze, the chief problem is developing a good national strategy. Clear milestones were important to steer investments in the right direction; but how should they be found if each sector – education, health, agriculture, to name just a few – had its own digital requirements? How could the piecemeal policies be brought together in one digital roadmap?

The private sector representatives recommended not to try and do everything at once. Instead of attempting to deploy a network solving every problem, the initial approach should focus on a handful of core applications using a system that could later be applied to other areas. A key conclusion of the panellists was that any projects implemented had to become self-sustainable and scalable over time. Also, the private sector had to demonstrate readiness to enter long-term commitment – 15 years could be needed to recoup investment. So there was no room for people eager to make a hasty profit.

A matter of responsibility

Andreas Spiess, CEO of Solarkiosk, a company that sets up solar-powered kiosks in African communities where people can use or buy a wide range of equipment, called on all sides not to forget the issue of responsibility. “The new media give children a glimpse of the big wide world, and then they no longer want to stay at home and do farming,” Spiess warned. Especially in the employment of the new media in school education and vocational training, responsible handling of contents was important. He cautioned that the African governments should not make promises they could not keep, for this would only deter investors. And he called on the latter – be it from the public or from the private sector – to seek a good understanding of local customs and above all focus on local skills, organisations and businesses.

For more information, brief summaries of the sessions and videos of the panel discussions, see European Development Days website