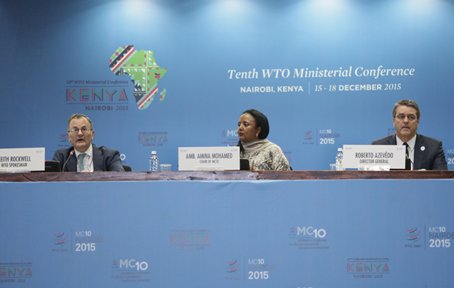 At the 10th WTO Conference of Ministers in Nairobi, Kenya, in 2015, the focus was on export subsidies.
Photo: © WTO

Agricultural subsidies are the biggest obstacles in international trade talks. Now the EU and Brazil have submitted a joint proposal to the WTO calling for a harmonisation of domestic subsidies to promote fair global trade.

Early in July, the world’s biggest agricultural producers, the European Union and Brazil, presented a joint proposal to the World Trade Organization calling for a global fair regulation of agricultural subsidies. Columbia, Peru and Uruguay have already pledged their support. Agricultural subsidies will be on the agenda of the 11th WTO Conference of Ministers in Buenos Aires, Argentina, this December.

By 2018, trade-distorting subsidies are to have been reduced to a level creating comparable conditions world-wide. They are to be limited in relation to the size of agriculture in individual countries. Special rules apply to developing countries, with the lowest developed countries (LDCs) not being required to define any subsidy limits. Other developing countries are to be given more time to adapt to the new subsidies by 2022. The cotton trade, which is of particular importance to most developing countries, will be given special consideration. In this sector, ambitious, specially focused measures are to facilitate a reduction of subsidies in the near future.

In order to maintain food security, existing subsidy practices in warehousing are to be aligned with the WTO rules on subsidies. In the main, the subsidy regulations are to be made stricter and will be accompanied by measures preventing market distortions.

In addition, the EU also seeks to discuss new rules for fisheries subsidies, electronic business transactions, inner-state regulations in the services sector and investment reliefs for smaller enterprises at the WTO Conference of Ministers.

Brazil and the EU had already put the topic of subsidies on the agenda of the 10th WTO Conference of Ministers in Nairobi, Kenya, in 2015, the focus being on export subsidies. “EU agricultural policy has undergone comprehensive reforms. Today’s proposal ought to result in other WTO members following our example,” Phil Hogan, European Commissioner for Agriculture and Rural Development, says optimistically.