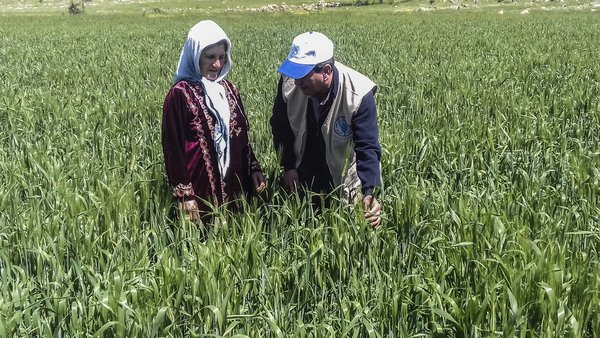 A woman checking her wheat crop in Muhradah district, Syria, after receiving wheat seeds as part of an FAO/DFID project which is designed to restore cereal production capacity.
Photo: ©FAO/Maher Khalouf

An FAO report presents a nation-wide assessment of the impact of war on agriculture in Syria and recommends that Syrian agriculture should be kickstarted now despite huge destruction.

Fighting in Syria has caused huge damage and losses to agricultural production, but the sector can and should be kick-started now, according to a report on a nation-wide assessment, carried out in August and September 2016 in Syrian rural areas, of the damage the war has brought to the agri-culture sector. The report Counting the Cost: Agriculture in Syria after six years of crisis was pub-lished by the Food and Agriculture Organization of the United Nations (FAO) in April 2017.

In addition to the severe human suffering, the conflict has caused more than USD 16 billion of lost crop and livestock production and destroyed farming assets. Kick-starting agricultural production in Syria now, can dramatically reduce the need for humanitarian aid and migration.

Around 95 per cent of communities surveyed felt that if they were assisted with even basic agri-cultural support such as seeds, fertilizers and fuel to power irrigation pumps, it would reduce the number of people abandoning rural areas to find opportunities elsewhere, and also encourage the return of migrants and internally displaced people.

Proportion of income spent on food has soared dramatically

Less than half of the 2011 rural population still lived in rural areas in 2016. Over 75 per cent of these households in rural areas still grow food for their own consumption, although at a very re-duced scale. But about 60 per cent of them reported that a lack of fertilizers was a critical produc-tion constraint for crops such as wheat, barley, legumes and pulses.

The lack of fuel, outbreaks of pests and diseases, and destruction of irrigation systems and water points for livestock were also listed as important constraints. Since 2011, household livestock own-ership has plummeted dramatically.

The proportion of income spent on food has soared as incomes and household food production have decreased, while food prices have increased dramatically. Before the crisis about 25 per cent of households would spend over half their annual income on food; by the time of the survey in Sep-tember 2016, 90 per cent of households were spending more than half of their annual income on food.

The initial cost of rebuilding the agriculture sector over a three-year period is estimated at be-tween USD 10.7 and USD 17.1 billion in total, depending on whether there is no change in the con-flict, a partial return to peace or a full return to peace.

Rural households are very clear about what they require to resume or boost their agricultural production. Basic supplies such as fertilizer, seeds and veterinary medicine for livestock are ur-gently needed. After those needs have been met, emphasis should shift to credit, processing and marketing support, and repairing critical assets such as irrigation infrastructure.

Despite the potential of agriculture to address mounting food availability and access constraints, very little has been invested to save and protect agriculture-based livelihoods during the six-year conflict and support the recovery of the sector.

The report states that if productive farming areas continue to be neglected, more people will be forced to leave rural areas and Syria will be in danger of emerging from the conflict as a country with its commercial food production and agricultural base on the verge of collapse.

For more information:Counting the Cost - Agriculture in Syria after six years of crisis