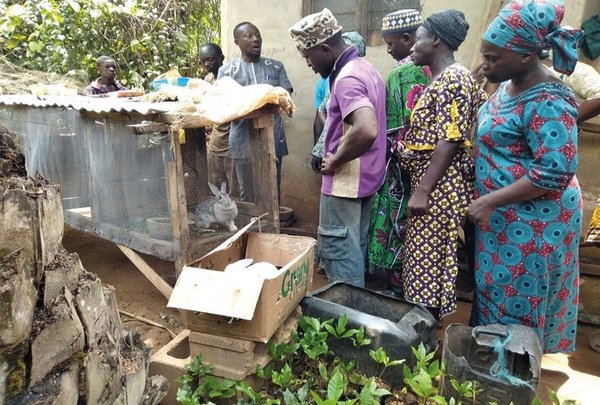 Subject Matter Specialists (in grey) from the Department of Wildlife and Ecotourism showing farmers how to raise rabbits.
Photo: Titilope Olarewaju

Engaging the community in solving the bushmeat crisis

Bushmeat has been a major source of protein and livelihood in the tropical forests for millions of years. Using wildlife for this purpose has been growing rapidly, putting pressure on wild animal populations and creating attendant crises such as outbreak of zoonotic diseases and ecological imbalances. Our author gives an account of how this issue is being addressed in a project run by the Forestry Research Institute of Nigeria (FRIN).

Bushmeat simply stands for any wild animal killed for the purpose of eating its meat, and is an integral part of African culture. Hunting of wildlife is one of the coping and survival strategies used in the continent. Bushmeat has traditionally been a key source of protein and livelihood in the tropical forests. It is used to achieve food security and nutritional balance, create employment and cash income and generate an inflow of foreign earnings. It is applied in medicinal and health remedies, drug development, ceremonial and spiritual cleansing, and cultural and religious practices. Changes in technology, population growth and declining economies have contributed to rapid increases in the use of wildlife, as have increasing urbanisation associated with higher income and standards of living, a growing preference for bushmeat as well as an increasing fragmentation of forests.

Although all of Africa is affected by this new crisis, West and Central Africa are most hard hit. The impact of the increasing consumption of bushmeat is associated with a number of challenges. If the present hunt rate continues, the outbreak of zoonotic diseases and ecological imbalances will become ever greater issues of concern. A growing appetite for bushmeat among urban residents is increasing the transmission of zoonotic diseases like Ebola and COVID-19, and threatening wildlife populations in Nigeria and its surrounding countries. In a study conducted in major Nigerian cities, around 98 per cent of urban bushmeat consumers indicated that there are suitable alternatives to bushmeat, but 75 per cent of the respondents still intended to continue eating bushmeat despite the COVID-19 pandemic and the links between bushmeat trade and the spread of zoonotic diseases. However, hunting of bushmeat in rural communities is largely driven by limited dietary options and demand from cities, which is economically rewarding. The production of alternative sources of protein and income is one strategy that can be used to address the bushmeat crisis in rural communities. Bushmeat hunting is acknowledged as the biggest contributor to the spread of zoonotic diseases. The Ebola outbreak of 2013 and the current COVID-19 pandemic have shown that habitat reduction and unregulated wildlife hunting is significantly increasing our contact with animal reservoirs and enhancing the chances of disease transmission. It was to this end that the Forestry Research Institute of Nigeria (FRIN), which has a mandate for environmental sustainability, started a domestication and multiplication programme for small monogastric and ruminant animals.

The project “Domestication of Small Monogastric and Ruminant Animals” (DSMR) has primarily targeted rural communities, since bushmeat is mainly hunted and supplied to urban cities from such areas. The dissemination of production technologies of selected small monogastric and ruminant animals is the core activity under this project. Considering resource limitations and conditions in such areas, grasscutters, or greater cane rats, and rabbits appeared to be suitable animals to promote. Both animals have the ability to feed on a wide range of grasses, leafy materials, tubers, fruits, grains and other kitchen leftovers. Rearing of these small monogastric animals provides alternative sources of income for farmers when sold and also increases farmers’ access to animal protein for dietary needs when consumed at home. The meats are highly marketable and accepted by all social classes in urban and rural communities of West Africa. In terms of nutrition, they serve as important sources of highly priced animal protein thanks to their leanness and unique organoleptic properties. Both grasscutters and rabbits can be raised as backyard ventures.

The DSMR project started in 2019 and is fully funded by the FRIN under the Ministry of Environment. It aims at diverting over-exploitation of forest resources to sustainable use systems. In the project framework, trainings are organised by the Forest Economics and Extension services extension arm in collaboration with Subject Matter Specialists from the Department of Wildlife and Ecotourism.

Thirty-five communities which the FRIN has an existing relationship with were contacted and briefed about the opportunity to obtain free training and discounted start-up kits for groups or individuals. Farmers were able to inform the FRIN of their interest in the project. A total of 20 farmer groups got in touch, and the project team visited and trained them on grasscutter and rabbit production techniques. Areas covered in the training included housing, procurement of foundation stock, feeding, sex determination, stocking and pairing of animals in cage(s), reproduction, gestation and parturition, weaning, processing and preservation of meats, as well as marketing. Farmers and groups interested in rearing either of these animals were required to provide space and housing units for the respective animals. Preliminary visits and reconnaissance surveys were then conducted in order to determine the availability and suitability of housing units for the animals in these communities. Farmers or farmers groups who met these conditions were then supplied with start-up animal kits on a discounted arrangement in order to enlist commitment of beneficiaries. For communities around Ibadan metropolis, five groups have benefited from this arrangement, and plans are in place to replicate the project around the major cities in the country’s six geopolitical zones. The reports from beneficiaries indicate that the animals are a great protein source and have reduced hunting levels. Community members have also been earning regular incomes from sales of the animals, as reports have it that a group that initially acquired three bucks and one doe now has 18, with an additional 22 consumed, gifted or sold. Technical know-how, discounted foundation stocks, routine follow up and guidance have so far helped in consolidating this achievement. The FRIN plans to cover at least two major cities per geopolitical zone, with the aim of supporting a minimum of five groups per city. This is expected to cover ten groups or individuals per zone and a total of 60 groups spanning the six zones of the country. Presently, funding, insecurity and avid commitment on the part of farmers are the major challenges of the project. The project is still in its early stages, so that an account of its impact on hunting and consumption of bushmeat cannot be given yet.

Alex Oluseyi Ereme is a Principal Instructor at the Wildlife and Ecotourism Department.

Lucy Adeteju Orumwense is a Research Fellow 1 at the Forest Economics and Extension Services Department.