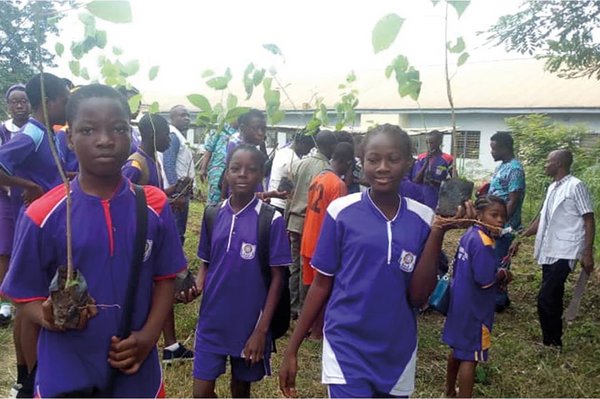 Forests, the lungs of the Earth, are disappearing at an alarming rate. In Nigeria, less than two per cent of the forest cover remains. Restoring and conserving what is left is crucial, and is a collective effort if we are to cope with global warming. In any sustainable tree planting exercise, involving youth, teenagers and children is important. With this in mind, the Forestry Research Institute of Nigeria (FRIN) established the Go-Green project. It was designed to create conservation consciousness among young people and show them the benefits of tree planting and its impact on the environment.

About half the land in Nigeria used to be covered with trees. Today, all but about two percent of them have been chopped down, and less than one per cent exists as frontier forests. Most of the trees have been lost to unsustainable timber felling, converting into farmland, industrialisation and urban development. In addition, more than 70 per cent of Nigeria’s rural population use firewood, a key contributor to deforestation.

Nigeria's forests have been declared among the most threatened on the planet, given high population growth rates impacting heavily on forests and resources derivable from them. As early as 2008, Kabiru Yammama, head of the Nigerian National Forest Conservation Council (NFCCN), had warned that “Nigeria will lose all of its remaining forests in the next twelve years if the rate of deforestation remains unchecked”. Deforestation – removing trees without replacing them – has social, economic and environmental effects on the ecosystem and livelihoods of the people. Its effects include loss of animal and plant species habitats, loss of shade from sunlight, fertile land becoming a desert and water scarcity. Cutting of trees also exposes the soil to erosion and flooding, resulting in loss of soil nutrient, land degradation and loss of livelihoods depending on forest products. Collective and concerted efforts are therefore needed to properly manage and conserve the remaining existing forests in the country in order to safeguard the future.

The Go-Green Project and the Young Foresters Club (YFC)

To contribute to increasing Nigeria’s forest cover and reduce the effect of climate change in the country, the Forestry Research Institute of Nigeria – FRIN – decided to extend its conservation efforts to younger people. Saddled with the mandate on training, extension and outreach, FRIN launched the Go-Green Project. The project was designed to develop collaborations with schools on environmental conservation measures and support the students in establishing the stand of trees in their respective schools. It involves among others public and private schools, the Institute’s extension service and technical officers. Ten primary and secondary schools have successfully been adopted in the Southwest geopolitical zone, while other zones are to follow.

Within the framework of the project is the formation of the ‘Young Foresters Club’ (YFC), created to arouse conservation consciousness among the young and bring interested students in the adopted schools together for environmental education, in-depth training and demonstration of tree planting exercises as well as micro-level production of other resources derivable from the forest, such as mushroom and snail rearing. The YFC is to inspire young people and imbibe the culture of tree planting and environmental protection in them so that they grow up with it. In the long run, this is intended to reverse environmental degradation in our communities and ensure economic development and better living standards.

For the formation of the Young Foresters Club, a multi-stage sampling procedure was used to select 30 schools in each of the geopolitical zones in Nigeria. The first stage involved a random selection of three states in each zone. Next was the random selection of five local governments from each state. A primary and secondary school were then randomly selected from each local government in the third stage, yielding a total of ten schools per state. Adoption of each selected school was based on acceptance of the school management after an official letter was sent and follow-up visits made to the management of the schools. Membership of the YFC was made voluntary, depending on the interest of the students.

Club meeting days were held at intervals of two weeks. Here, students were taught how to plant a tree correctly using simple tools with general on-the-field discussions on the importance of trees. Trees were planted within the school premises, with the choice of location jointly made by the YFC members, agricultural science teachers and the forest extension officers of FRIN. Members of the club participated fully in the tree planting exercise, and transfer of knowledge was enhanced. The Institute provided each participating school with 50 tree seedlings to encourage demonstration practices.

Getting the young forester to love trees

The primary aim of engaging the students was to make them love and protect trees. They were taken through the step-by-step procedure of planting trees with a demonstration method involving them in planting, nurturing and tending the trees. At the club meetings, the students learnt about various types of tree species and their economic importance. During a symposium at the Institute, a quiz competition was organised for the participating schools to assess the knowledge acquired during club activities.

FRIN’s extension and technical staff, the head of each participating school and students were involved in the planting exercise. The schools were supplied with tree seedlings for planting. Most sites had already been cleared. Planting holes were dug in rows at spacing of 3m by 3m. The planting was first demonstrated by FRIN staff, after which the heads of the schools and the students planted up the seedlings.

The students participated fully in the monitoring of tree growth. All students in the YFC were given a tree seedling to plant and tend, and so the tree became their ‘Baby’, and they were told that ‘the Baby must not die’. This made them become more committed and devoted to tending the trees.

The extension team adopted a participatory approach which enabled school management, teachers and students to learn new perspectives on conservation and work together. Continuous sensitisation was carried out on the effects of deforestation and benefits of tree planting (see Box below). Thus, participating schools developed a sense of ownership of the project and became interested in the tree planting exercise.

BENEFITS OF TREE PLANTING
Tree planting is an engaging environmental activity providing an opportunity for community involvement and empowerment which improves the quality of life in our neighbourhoods. The importance of trees in human life cannot be overemphasised. They help clean the air we breathe by absorbing pollutant gases and sweep up particles like dust and smoke, and contribute to reducing the effects of climate change by trapping greenhouse gases. Trees play a key role in capturing rainwater and reducing the risk of erosion, flooding and landslides, and provide habitats for hundreds of species of insects, fungi, moss, mammals, and plants. They bring economic benefits to an area by raising house prices on aesthetic grounds. Trees provide food such as apples, pears, cherries, plums, etc., and their leaves, branches and barks can be used in medicine. Trees planted in the cities can have a positive impact on mental health and wellbeing, reducing stress and encouraging outdoor activities. They also provide shade, serve as windbreaks and can moderate the heat effect caused by pavement and buildings in commercial areas.

Lessons learnt, and what next?

The project was conceived because of the dire need to involve the youth in conservation, thereby imbibing the culture of tree cultivation and nurturing into them at tender ages. Project activities were planned around the availability of students because they would play key roles in the activities by providing their time and labour. Students participated fully from the very first stage of sensitisation and awareness to preparing the sites, planting, monitoring tree growth and other activities.

School management cooperating in releasing their students for extra curriculum activities was a key factor in the success of the project. Organising training in a way not interfering with students’ academic periods was also important for the effectiveness of the exercise. Extra-curriculum activities slated during off-periods yielded more success, and increased student participation was recorded. Involving the youngsters at a tender age will go a long way towards imbibing the culture of tree planting in them. With the successful implementation of the Go-Green Project in the Southwest zone of the country, replicating it in other geopolitical zones is not expected to be a challenge. Tree planting through a participatory approach has proven to be effective, and, contrary to expectation, the young ones’ perspectives towards conservation and tree nurturing is unprecedented – in other words, the children love trees!

THE FORESTRY RESEARCH INSTITUTE OF NIGERIA
The Forestry Research Institute of Nigeria (FRIN) was initially established as the Department of Forestry in 1954. It is the only Research Institute under the supervision of the Federal Ministry of Environment. Its mission is to ensure, through scientific research and outreach activities, human resource and community development, sustainable forest resources production and utilisation, management of soil and water resources, environmental conservation and protection, reclamation and rehabilitation of degraded lands for environmental sustainability, and self employment and poverty alleviation. The Institute has Research Departments located at its headquarters in Ibadan, as well as Colleges and Research Outstations in all the geopolitical zones of the country. To disseminate its technologies among the rural communities, FRIN has adopted villages across the country. In a bid to reach out to the young ones, the Institute has also adopted primary and secondary schools in the country.

With contributions from Lucy Orumwense and Titilope Olarewaju, who are both Research Fellows 1 at Forest Economics and Extension Services Department at FRIN, Ibadan, Nigeria.