Funds were rapidly made available internationally to check the spread of Avian Influenza following the outbreak of the disease. But how effective and efficient have programmes initiated been in the longer term? The authors look at an Indonesian-Dutch programme and consider the potential of factors such as capacity building and the widening of the programme’s remit.

As the first human cases were being detected in Southeast Asia early in 2000, concern over Avian Influenza or HPAI started growing all over the world. There was fear of a possible viral mutation into a highly pathogenic strain that could be transmitted between humans, causing a pandemic of unpredictable dimensions and with devastating consequences. Donors quickly made funds available for HPAI control projects all over the world. The real cost-effectiveness and the medium to long-term efficiency of such projects are often belied by the need for a rapid response in emergencies.

One of these projects, the IDP (Indonesia-Dutch Partnership on HPAI) 2005–2011 programme was implemented by a Consortium of Dutch institutes and their partners in Indonesia. This article assesses whether a degree of flexibility and a wider perspective leads to more sustainable project results in the medium-long term. It shows that capacity building and technical assistance can have a positive impact when delivered at decentralised (implementation) level and when addressing animal disease control as such, rather than focusing on the national level and HPAI control only.

The Dutch institutions participating in the consortium included Wageningen University and Research Centre, the University of Utrecht, and the GD-Animal Health Services. The Indonesian partners comprised private and governmental institutions at national and at provincial/district level. The Centre for Development Innovation of Wageningen University and Research (WUR-CDI) has been the lead agency for the whole programme. Contacts between Indonesia and the Netherlands on the issue date back to 2005.

- Avian influenza (AI), commonly called bird flu, is an infectious viral disease of birds.
- Most avian influenza viruses do not infect humans; however some, such as H5N1, have caused serious infections in people.
- Outbreaks of AI in poultry may raise global public health concerns due to their effect on poultry populations, their potential to cause serious disease in people, and their  pandemic potential.
- Reports of highly pathogenic AI epidemics in poultry can seriously impact local and global economies and international trade.
- The majority of human cases of H5N1 infection have been associated with direct or indirect contact with infected live or dead poultry. There is no evidence that the disease can be spread to people through properly cooked food or from person to person.
- Controlling the disease in animals is the first step in decreasing risks to humans.

The poultry sector in Indonesia

Poultry meat and eggs represent an important source of protein in Indonesia, and poultry is a main source of income for many farmers there. With 1.2 billion animals in 2004, the country had the third largest poultry population in the world, after China and the United States.  The 2004 classification of the Food and Agriculture Organization (FAO) lists four sectors in the Indonesian poultry industry (cf. Box below). The value chain of poultry-related products in Indonesia varies considerably depending on the sector and the type of product.

The entry of HPAI in Indonesia in 2003 caused many deaths in poultry and severe production losses in rural and industrial poultry production and raised concern over its spreading among humans. At least 10.5 million heads of poultry were reported lost due to outbreaks and culling. The disease now affects every sector of Indonesia’s poultry business. With large numbers of casualties in the Jakarta region (156 by the end of 2011), the local government increased monitoring and adopted new control measures on poultry movement and distribution. However, a lack of means as well as skilled staff rendered effective enforcement of measures virtually impossible.

The Indonesia-Dutch Partnership Programme on HPAI

The consortium designed a flexible programme that could be adapted and changed as new insights were gained. To cover the many aspects related to HPAI control, the programme targeted multiple stakeholders in the poultry business (government, research institutions, and private sector) and worked at national, province/district and company/farmer levels. Initially, with their assumed internal capacity for control and expected high level of bio-security, sectors 1 and 2 (cf. Box above) were not major targets for disease control. Sectors 3 and 4 were regarded as the main reservoir for the virus.

IDP aimed to help contain the HPAI threat to humans and animals in Indonesia through: i) enhancing the capacity of the animal health system at national and provincial/district level; ii) improving diagnostic capacity and quality of HPAI vaccines; and iii) increasing bio­security at production and market level. The programme focused on six main intervention areas, with a different module with specific activities for each intervention area: 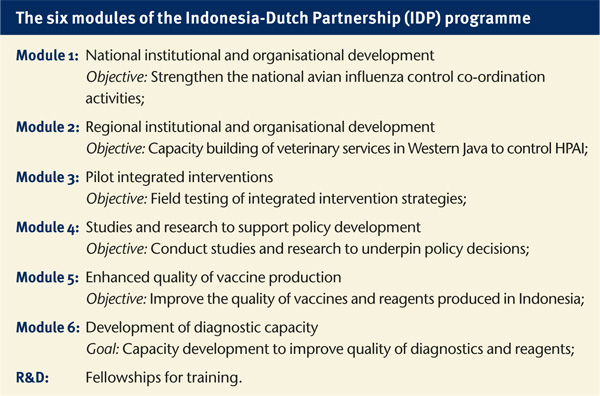 After its start in 2005, IDP was provided in 2007 with additional funding, also to upscale the programme and extend it to 2011. The focus was shifted from national level to veterinary services at provincial and district level, as well as from capacity building for HPAI control to general poultry or animal health management.

Joint R&D has been an essential approach during the programme. More research was needed to better understand HPAI in Indonesia before recommending the right activities to control it. Nevertheless, it was not always possible to implement the recommendations, major constraints being:

Two activities described below exemplify this discrepancy between the project outcomes and the effective adoption of its recommendations.

Three surveillance programmes were carried out in 40 poultry collector facilities (PCF) in Jakarta. These included the use of sentinel birds, environmental sampling, and sampling of incoming poultry consignments. Around 80 percent of the PCFs appeared to be contaminated with HPAI. Contaminated collector houses are hotspots for the H5N1 virus and not only represent a threat to workers, traders, butchers and consumers, but could also be a major hub in spreading the virus back to the field through infected material on people’s clothing (drivers and their assistants), poultry crates and vehicles. Also, because of the generally extremely poor sanitary conditions under which the animals are kept and slaughtered, PCFs should be considered a high public health risk for densely populated cities like Jakarta. But while the project proved that PCFs are hotspots for dissemination of HPAI, this did not result in government action on disinfection, cleaning, closing or reorganisation of the collector houses.

Knowledge about the real epidemiological status of sectors 1 and 2 proved scanty, as did evidence of data being efficient in controlling the disease. Data were missing and little or no evidence existed about their real efficiency in controlling the disease. The private sector did not trust government policies on HPAI monitoring and control. Neither were veterinary services properly empowered to impose these controls. To bring back these sectors in the programme and increase the knowledge about their real status, IDP provided support to develop a system for Compartmentalisation and Zoning (C&Z) in the poultry industry. In the C&Z concept chosen, sector 1 poultry farms have to be certified free of HPAI and meet a prescribed level of biosecurity standards. IDP organised workshops with private sector actors and national and district officials to discuss implementation, auditors were trained in biosecurity and auditing, and a Quality Manual with supporting Standard Operating Procedures (SOP) was developed.

Now the Ministry of Agriculture intends to issue a decree on the implementation of C&Z and the establishment of the Certification Body. But since there has been little consulting between government and the private sector on the mode of implementation and the expected benefits are minimal, it could well turn out to be another ineffective paper regulation not supported by the industry.

In the case of IDP, international fear of a world-wide pandemic promoted the provision of international donor funds to control HPAI in the hotspots in South-east Asia rather than an internally felt need in the country itself to protect the poultry industry from an infectious disease. Indonesia was flooded with donor funds, with projects then trying to convince the central government that increasing budgets and government interventions should have top priority. Also, most of the aid projects focused on the central government level, while in Indonesia animal disease control is primarily the responsibility of the decentralised provincial and district government structures. While IDP, which was initially strongly externally driven, focused on HPAI control, Indonesian priorities and interests were much broader, regarding livestock production, animal disease control in general, as well as human disease control as priority areas. However, the programme successfully applied various strategies to cope with this situation:

With their high level of autonomy, districts in Indonesia can decide their own ways of implementing animal disease control and (livestock production) extension. Working at central government level only does not necessarily result in any improvement in disease control at field level. Capacity building should include the level where information on animal diseases is collected, decisions are made and implementation capacity for taking action is required. The project has developed a suitable concept for strengthening the veterinary services at provincial and district level. Now that the attention and concern about a possible HPAI pandemic has strongly decreased, IDP has managed to create the conditions for a better response to any animal disease outbreak, at province and district level.

Some of IDP’s achievements for R&D and capacity building

- Efficacy of vaccination tested.
- Capacity for vaccine production and quality control available.
- Diagnostic capacity available/improved.
- Increased the capacity and created a reservoir of staff that could be used in HPAI, poultry (and other) disease control.
- Poultry collector facilities appeared to be hotspots for dissemination of the virus.
- Basic requirements for Compartmentalisation & Zoning fulfilled.
- The real epidemiological status of sector 1 and 2 constitutes a grey area as data were missing.
- 6 MSc and 1 PhD students have been sponsored.
- 5 articles have been published and 15 presentations and posters made for international conferences.