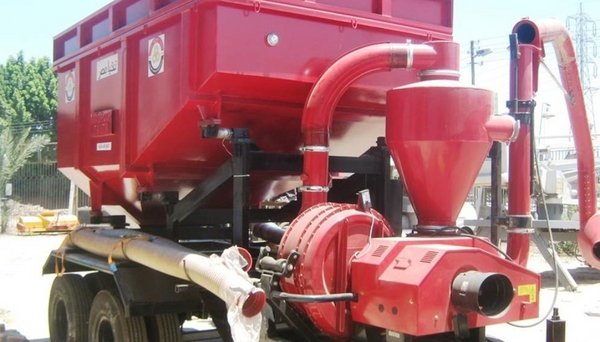 The truck has a pneumatic system that ensures the transportation of the grain without damage.
Photo: SciDev.Net/ Mohamed ElKhouly

Egyptian scientists have developed a truck with a technology that cuts grain losses down to zero during transports to the silos. The truck is also equipped with a precise system to record the weight of the crop and estimate the price for the farmer.

A truck designed by a team of scientists at the Egyptian Agricultural Engineering Research Institute (AENRI) to put an end to wheat losses during transport from fields to storage silos is set for testing in Egypt this summer.

During the harvesting season in Egypt, it is common to see grains scattered across routes used by transport vehicles. This is due to bumpy roads, too many bags of wheat stacked on these vehicles, or bad packaging.

According to the Egyptian Ministry of Supply and Internal Trading, the wheat lost during transport currently amounts to a sixth of the local harvest, and was less than half three years ago. The country loses 15 per cent of the grain destined for its silos, costing the government about two billion Egyptian pounds (approximately USD1.1 million).

Four years ago, the former Egyptian Minister of Supply decided to tackle the problem by asking the Egyptian Academy of Scientific Research to dedicate a fund to find a solution.

“It was evaluated last December, and will be tested during the next harvest season in June this year,” confirmed AENRI’s vice chairman for research Mohamed Al-Kholy in an interview with SciDev.Net. The project was funded by a grant of one million Egyptian pounds (approximately USD 56,000) from Egypt’s Academy of Scientific Research.

No damage to the grains and accurate weighing is possible

In the interview, Al-Kholy explains that the design features a pneumatic system which uses compressed air to pull the grains inside the vehicle. This ensures that the wheat can be transported without any damage, even on bumpy roads.

Al-Kholy is confident that the trailer will “address all the problems related to the process of transporting wheat harvest”. Although its primary objective is to facilitate transportation to eliminate waste, he says its potential benefits go beyond that.

For example, it also addresses one of the main problems associated with the transportation process: the fact that officials cannot weigh the wheat accurately using manual tools at storage silos, where supplies may arrive either damaged or containing a high amount of impurities due to the poor packing.

According to Al-Kholy, the truck separates impurities from the grains using the difference between their weights. Working on the principle of critical velocity, the air inside the vehicle retains the grains while removing the impurities.

Verifying the grade of the wheat arriving at silos, which is based on the personal assessment of an official, is another problem this invention aims to solve. ‟The truck is also equipped with a precise system to record the weight of the crop and estimate the price for the farmer in the field,” says Al-Kholy.

He explains that these issues do not affect just the farmer, but also the government, which ends up paying a price for high-grade wheat when in fact it receives cargo with a large amount of damaged grain.

Mohamed Abdel-Moneim, head of the Faculty of Agriculture at Zagazig University in Egypt, says the innovation could also be used to transport imported grain, which is subject to similar problems. According to Abdel-Moneim, two wheat shipments that arrived in Egypt from France and Romania a few months ago were rejected because they contained poppy seeds. ‟The use of a truck with these specifications will completely protect us from such errors thanks to its ability to separate impurities from the grains,” he says.