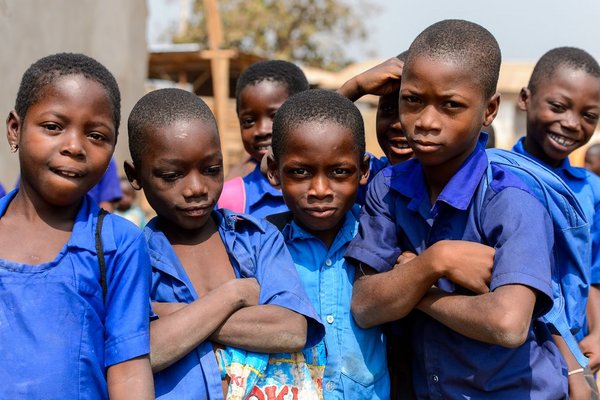 The construction and equipment of school infrastructures and the distribution of school kits are among the actions supported by the GPE in Benin.
Photo: ©Anton Ivanov/Shutterstock

Education: the key to sustainable development

Since 2008, Switzerland has supported the Global Partnership for Education, the largest global fund dedicated to strengthening education in low-income countries. But what exactly is Swiss international cooperation (SDC) doing on the ground?

"Without education, there can be no equality, prosperity or sustainable development," stated the Director General of Swiss Development Cooperation (SDC) Patricia Danzi in late July 2021 at the Global Education Summit in London. Switzerland confirmed at this event that it would contribute CHF 52 million to the Global Partnership for Education (GPE) over the 2021–25 period. In its international cooperation strategy, Switzerland affirms that education is a key factor in reducing poverty, as well as the foundation for achieving gender equality, equitable participation in social and political life, and economic development.

These convictions underpin the SDC's commitment to this multilateral partnership, which plays a key role in working toward Sustainable Development Goal in Education of the 2030 Agenda. "By partnering with GPE, Switzerland is helping governments make systemic changes to deliver education for the most marginalised children, raise learning levels, withstand shocks and adapt to new challenges," said Alice Albright, GPE's Chief Executive Officer. These challenges include the current pandemic: "At the height of school closures, an estimated 1.6 billion children were out of school.

Over half of GPE's partner countries are SDC priority intervention countries where there are Swiss cooperation offices on the ground. In Afghanistan and Benin, in particular, Switzerland is involved in several projects to promote basic education, developed in coherence with the national plan and GPE support. Switzerland bases its cooperation work on the principle of 'leave no one behind'.

Education quality is a challenge in sub-Saharan Africa: according to the World Bank, 60 per cent of students in in sub-Saharan Africa cannot read or write when they finish primary school. By 2050, an estimated 50 per cent of the African population will be under 15 years old, making it all the more important to pick up the pace on inclusive, quality education. In this region, Benin has been an SDC priority country since 1981. For several decades, the SDC's cooperation office has supported the national government and local communities in working toward an effective education system.

Elisabeth Pitteloud, director of the Swiss cooperation office, and Barnard Vinagbo Agbangla, the education programme officer, run several related projects and help plan and manage GPE funds. Benin has been a GPE partner country since 2007 and has received over USD 100 million to implement its education sector development plan. "GPE-funded projects – including school enrolment campaigns, building and equipping school infrastructure, helping to run school canteens, and distributing educational kits to students – have had real results," Pitteloud and Agbangla explain. "For example, the gross school enrolment rate rose from 98% to 115% between 2006 and 2016."

These encouraging results have helped Benin secure new funding to plan its activities in the education sector for the next several years. The SDC has supported the government of Benin in its development phase. "The process was driven entirely by the education ministries, which received training in education system planning and management," say Pitteloud and Agbangla. "GPE's eligibility criteria for granting new funding to its partner countries have promoted dialogue between all education stakeholders in Benin, and participatory management has increased as a result. This type of mechanism makes it easier to conduct political dialogue and gives everyone a higher level of responsibility." The SDC's projects, which are developed and implemented in line with Benin's sectoral plan and GPE funding, aim to achieve sustainable results through project continuity.

More information:
Switzerland announces its support for the Global Partnership for Education (GPE) for the period 2021–25