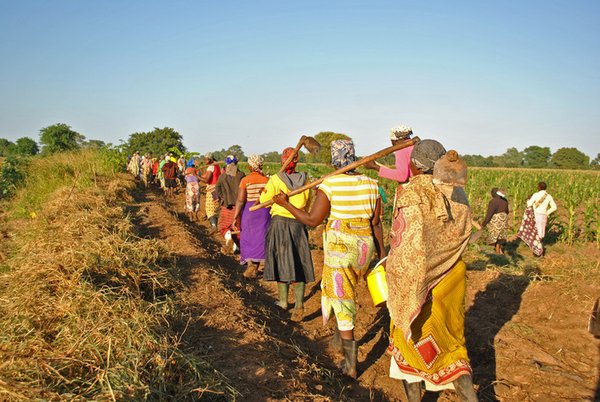 Women walking towards their small farms, Mozambique. To eradicate extreme poverty investments have to be focused on rural areas.
Photo: © IFAD/Clarissa Baldin

Global economic downturn is causing 38 million more people to remain in extreme poverty than previously thought. Almost all of the countries with large numbers remaining in extreme poverty in 2030 will be in sub-Saharan Africa or South Asia; rural areas will be hit hardest.

Robust economic growth in developing countries—which has far outpaced that of most high-income countries—contributed mightily to achieving the United Nations Millennium Development Goal of cutting extreme poverty by half five years ahead of its 2015 deadline.

But efforts to eradicate extreme poverty by 2030—the first UN Sustainable Development Goal (SDG)—are now jeopardised by a deteriorating global economic outlook, according to the study “The global economic slowdown: Implications for the rural poor” released in September 2016.

The study by the International Food Policy Research Institute (IFPRI), conceptualised and financed by the International Fund for Agricultural Development (IFAD), takes into account changes in projected growth rates in both key driver economies such as the United States, Europe and China, and in many developing countries.

Rural areas will be hit hardest

The study estimates that the extreme poverty rate in 2030 will be 5.2 per cent, not the 4.8 per cent projected without the global economic downturn. This will leave an additional 38 million people still living on less than USD 1.90 a day, the benchmark for extreme poverty, in 2030.

Rural areas, where most of the world’s 900 million poor people live, will be hit hardest, with poverty both higher than in urban areas and more adversely affected by the slowdown, the study finds.

The gains that have been made in rural poverty reduction in the past 25 years are seriously jeopardised by the recent economic slowdown, according to an expert from IFAD. To eradicate extreme poverty, investments have to be focused on rural areas where the majority of poor people live.

The IFPRI researchers used economic modelling and built on projections from the International Monetary Fund to assess the impact of a projected global economic slowdown through 2030 on poverty. They analysed key impacts of the economic downturn on the poor—especially declining productivity, reduced saving and investment, and changes in wages and consumer prices.

The projections offer a gloomy look at the world’s struggle to eliminate poverty, its prospects complicated by an unstable global economic environment, including events such as Brexit, large-scale migrations due to wars or climate shocks, and other problems that threaten growth.

Almost all of the countries with large numbers remaining in extreme poverty in 2030 will be in sub-Saharan Africa or South Asia, the study shows.

Worldwide, more than 130 out of 189 countries will experience reduced income growth, the projections show, with the average global GDP growth rate falling from 4.1 per cent to 3.1 per cent between 2011 and 2030. That one percentage point per year difference will effectively trap tens of millions of people in extreme poverty, unless additional steps are taken to address their predicament.