"Each country must define its own priorities"

Many a dogma produced by agricultural policies over the past decades has proved disastrous for African agriculture. Ms Rhoda Peace Tumusiime, Commissioner of Rural Economy and Agriculture of the African Union (AU), looks at lessons learnt and suggests ways to bring progress to Africa’s rural regions. 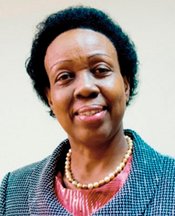 Ms Tumusiime, during the last decades, agricultural policies have undergone profound changes. What have the consequences been for the rural areas in Africa, and what are the lessons learnt from these policies?
Structural Adjustment Policies – SAP – compelled many African governments to reduce financing and investing in agriculture, and this downgraded the African agricultural sector. Reduced financing was accompanied by downsizing of personnel servicing the sector, including extension workers. This left the rural masses involved in agriculture on their own. Agricultural production and productivity fell drastically. Even after the African Union Heads of State and Government had adopted the Comprehensive Africa Agriculture Development Programme (CAADP) in 2003, it was not until 2007 that Rwanda became the first country to sign a CAADP Compact, an encapsulation of multi-stakeholder consensus and partner buy-in on the drivers of agricultural production and productivity, food and nutrition security.

It was not before 2009 that the bulk of the AU Member States signed CAADP Compacts. In adopting CAADP, AU Member States undertook to increase financing for agriculture to at least ten per cent of the national budget in order to attain six per cent growth in the sector. This was meant to be a break­away from the SAPs that had proven so disastrous for a continent whose citizens’ livelihoods predominantly depend on agriculture. When government disinvested from agriculture, the private sector could not fill the gaps. Government had to revive support for the agricultural sector. As time went on, it was also noted that government alone would not boost or sustain the sector. Thus initiatives for public-private partnerships have emerged. The local private sector is being engaged through AFRACA and other mechanisms, and, also working with the World Economic Forum, the AU is trying to leverage international corporate finance and investment towards agriculture.

Global issues such as climate change are impacting on agriculture. Eliminating hunger and raising farmers’ incomes are pressing objectives. Where do you see particular challenges for agricultural development in Africa?
The continent’s agriculture faces several challenges, finding itself competing for attention and resources among many priorities which more often than not outcompete it. Where no deliberate policies have been taken, agriculture still gets eclipsed. At the same time, the private sector has been reluctant to intervene in the agricultural sector, considering it as risky and as generating low returns. In the same vein, agriculture has tended to be left to the illiterate and the elderly as the educated youth flock to urban areas in search of white-collar jobs. Poor market infrastructure and underdeveloped factor and product markets are hampering progress in linking agriculture with markets. Another challenge is to do with low uptake of science and technology that in turn manifests itself in dismal application of fertilisers, use of irrigation, diversification and other modern techniques. Further, the issue of land tenure, land ownership and land use remains problematic, in particular as women, who are the majority of farmers, do not own land in most cases and therefore have no collateral to secure credit to purchase inputs to improve yields. One other challenge is climate change and climate variability, which leads to erratic weather patterns and causes prolonged droughts or devastating floods, thus eroding advances in agriculture.

So what should agricultural policies focus on?
The priorities for agricultural policies should vary from region to region and country to country and should, therefore, not be prescribed or generalised. The CAADP framework provides for multi-stakeholder consultations at country level. This ensures that each country can determine its priorities, which end up being signed into a CAADP compact. The compact forms the basis for a national agriculture investment plan to which any intervention, be it local, national or foreign, should be aligned. While some countries, such as those in the Horn of Africa and the Sahel, will place more emphasis on building resilience to climate change shocks, other regions may stress different aspects. But agricultural policies should generally aim to turn agriculture into a business, making it more attractive to investors and also the educated youth. Agricultural policies should cover the entire value chain: not only production and productivity but also post-harvest handling, processing and marketing infrastructure, hence the importance of agribusiness. It is the entirety of these that will catalyse the agricultural sector.

Are the policies in place suited to reach the envisaged goals?
The policies some countries are pursuing are likely to lead to the envisaged goals. The case in point is Ethiopia, which has embarked on policy and institutional reforms led by the Agriculture Transformation Agency. In Rwanda as well as in Burkina Faso, among others, the political leadership has determined agriculture as a top priority and hence accorded it due support to provide food and generate employment and incomes. Agricultural policies in a number of African countries are taking on board a critical constituency, the private sector, and this is especially so for countries within the Grow Africa Initiative such as Benin, Burkina Faso, Ethiopia, Kenya, Malawi, Mozambique, Rwanda, Senegal and Tanzania. Creating an enabling environment for private sector investment will attract it into agriculture and thus complement the efforts of the public sector towards boosting agricultural production for the benefit of citizens the majority of whom are engaged in agriculture.

Can success stories of some Asian countries serve as a model for policy design in Africa?
South-South Co-operation is one of the priorities of the African Union and its Member States. Recently, in July 2013, the African Union Commission, in collaboration with the United Nations Food and Agriculture Organization as well as the Lula Institute of Brazil, convened a high-level meeting in Addis Ababa to end hunger in Africa through unified approaches. The high-level segment was preceded by a senior level meeting that brought together African, Latin American and Asian experts to share experiences on best practices and success stories. There are a lot of similarities and lessons to draw within the context of South-South Co-operation, including, but not limited to India, China and Vietnam.

An important aspect of public-private partnerships is the value chain approach. How can it be ensured that small farmers are not left behind?
Small-scale farmers remain the pivot of African agriculture as the majority of our farmers are smallholders and so, our policies and programmes maintain them at the centre. Even when we advocate for Foreign Direct Investment in agriculture, we push to ensure that the interests of small-scale farmers are taken into account as outgrowers or contract farmers, among other options. This is the only approach that can lead to a win-win outcome. The AU Land Policy Framework and Guidelines are helpful in this regard.

There are different perspectives of the role the different actors should play in designing agricultural policies. Where do you see the specific tasks of each sector?
The hallmark of the CAADP process is its all-inclusiveness, and as such, CAADP country roundtables that precede the CAADP compact signing must of necessity involve and consult all stakeholders including government, business, civil society and partners. And their views must be reflected in the CAADP Compact which they eventually sign to prove this point. In terms of roles, the public sector is expected to provide the enabling environment, including peace and security and also sound and predictable policies as well as regulation and infrastructure. The private sector is, on its part, required and expected to bring in finance and investment to boost agriculture, including technology transfer. In AU parlance, farmers are also part of the private sector. Civil society is expected to advocate for and champion policies and practices favourable to agricultural investment and development.

With regard to the above-mentioned challenges, what role can and does CAADP play to promote the process?
It sets the target for AU Member States. They are to put in place policies and strategies to increase funding for the agricultural sector along the lines of at least ten per cent of their national budgets so that they can achieve a minimum of six per cent growth in the sector. CAADP also provides a framework for an evidence-based approach in designing policies and programmes in the agricultural sector. Furthermore, it has a mechanism that drives operations towards results and impacts on food, nutrition, incomes and general wellbeing. CAADP also ensures involvement and engagement of all stakeholders, not only government and donors but the private sector and civil society as well. In its four pillars, CAADP is, in fact, comprehensive in approach, covering land and water, the private sector, food and nutrition, and research and technology. CAADP also promotes prioritisation and alignment of interventions towards actualising the set priorities.

Rhoda Peace Tumusiime
Commissioner of Rural Economy and Agriculture of the African Union.