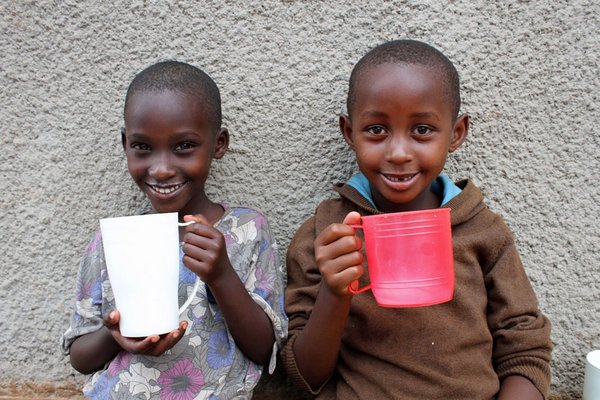 The demand for milk is steadily rising in African countries. Milk is an important nutrient in particular for children.
Photo: © CIAT

A recent study by the International Centre for Tropical Agriculture (CIAT) reveals, that around 40 per cent more milk and tens of millions of dollars in revenue could be possible for African farmers provided hey adopt new drought-resistant pasture grass developed by CIAT’s plant breeders.

New varieties of high-quality, drought-resistant forage grasses could boost milk production by 40 per cent and generate millions of dollars in economic benefits for struggling East African dairy farmers, according to a new analysis by experts at at the Centro Internacional de Agricultura Tropical (CIAT), based in Cali, Colombia.

According to Dr. Steven Prager, a senior scientist at the Center “CIAT’s research shows that brachiaria grasses could be the cornerstone of productive and resilient livestock systems that quickly provide more milk and money for small-scale dairy farmers. Prager is co-author of the new CIAT study that assessed benefits that could accrue to East African dairy producers from adopting new varieties of a pasture grass called brachiaria. The grasses were developed by CIAT plant breeders to survive harsh growing conditions, while providing considerable nutritional benefits for livestock.

The CIAT analysis focused on the additional milk and money they could deliver for an estimated two million small-scale dairy farmers across Kenya, Tanzania, Ethiopia, Uganda, Rwanda and Burundi. It found that investing in forage quality – and in getting new forages to farmers – can be a low risk investment likely to generate benefits in the order of tens of millions of dollars.

The new varieties are high-yielding, nutritious and, because they are easier for cows to digest, animals produce far less of the greenhouse gas methane per litre of milk produced, the experts of the study say. The grass has other climate-friendly qualities: its deep roots help it capture carbon and store it in the soil, while also preventing soil erosion. Given its many benefits, brachiaria grass has become the most extensively used forage in the world, with seed production already commercialised in big cattle-producing countries like Brazil.

According to Dr Solomon Mwendia, CIAT’s forage expert in Nairobi, Kenya, and a co-author of the report, many dairy farmers in Kenya are spending much of their day collecting wild grasses that do not give animals the nutrition they need. This takes time away from other jobs farmers could be doing, and at the same time results in a higher greenhouse gas footprint.

Brachiaria grass is native to Africa, but its performance and nutritional qualities have been improved through decades of work by CIAT’s plant breeders in Colombia. The Center is now working with public and private sector partners to increase the commercial availability of improved brachiaria seeds in Africa. Currently, seeds need to be imported, but the Center hopes that in the future commercial seed production can be established in Africa itself.

CIAT scientists are currently using big data approaches like remote sensing and digital mapping to find out where commercial production of brachiaria seed might be viable in Africa. But establishing brachiaria production and seed commercialisation in Africa will not be without its challenges, Araba noted. Reducing the possible impact of local plant pests and diseases will be key, requiring national testing and field trials in different agro-ecological conditions in each country. It will also require an awareness drive among farmers about benefits of cultivating forages.

This research is a collaborative effort between CGIAR Research Programmes and Centers, including: the International Center for Tropical Agriculture (CIAT); the CGIAR Research Programme on Policies, Institutions and Markets (PIM); the Global Futures and Strategic Foresight – a global initiative led by the International Food Policy Research Institute (IFPRI).

References: Carlos González and others  Improved forages and milk production in East Africa. A case study in the series: Economic foresight for understanding the role of investments in agriculture for the global food system , (October 2016, Internacional de Agricultura Tropical [CIAT])