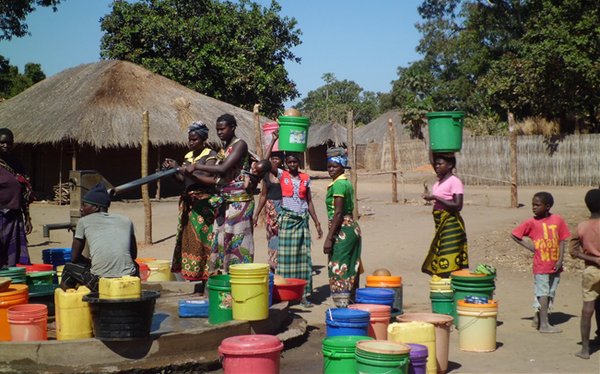 The women are the ones who can explain the importance of clean water to their families.
Photo: © OTTO

Drop for Life initiative by the Otto Group

The Otto Group is helping build wells and sanitary installations in villages in Mozambique, one of the grower countries in the “Cotton made in Africa” (CmiA) initiative. At the same time, CmiA is networking with partners in neighbouring European countries.

The initiative is called “Drop for Life”, and according to an announcement by the Otto Group in May 2015, the company has set itself the goal of building wells and sanitary installations in 16 partner villages in the Mozambican province of Capo Delgado. This is a cooperative effort with the Aid by Trade Foundation, Care Mozambique, German Investment Corporation (DEG), with funding from the German Federal Ministry for Economic Cooperation and Development (BMZ) and the Plexus Cotton company. In all, the partners are investing EUR 300,000 for this in Mozambique alone. Almost 30,000 inhabitants are benefiting from the positive effect on health and the elimination of the trips to the watering holes, which are often kilometres away.

Consciousness-raising measures will raise awareness of health-promoting measures among the local population. Specially-created committees will deal with the sustainable use of the newly-created watering places and latrines, and will act as interfaces with the rural village population.
“The measures under the ‘Drop for Life’ project are specifically aimed at women, as they make a particular contribution towards improving living conditions for the rural population. The women are the ones who can explain the importance of clean drinking water and sanitary installations to their families,” emphasises Tina Stridde, Managing Director of the Aid by Trade Foundation.
Currently, “Cotton made in Africa” is working in ten sub-Saharan countries with over 650,000 cotton growers. Experts train the small-scale farmers in sustainable growing methods which protect the environment and increase their harvests and income.

The Otto Group and the affiliated Aid by Trade Foundation (AbTF) further announced that AbTF has entered into partnership with the Dutch Africa Wise Group. In the word’s of AbTF Managing Director Stridde, the goal of this cooperation with the Africa Wise Group is to raise Dutch companies’ awareness that sustainability and cost effectiveness can be compatible, now that “Cotton made in Africa” has given them access to a commodity which is socially, ecologically and economically sustainable. Stridde also points to partners such as PUMA, the Rewe Group, the Otto Group and Tchibo, all long-standing supporters of the concept of “Cotton made in Africa”. The CmiA seal is only awarded to cotton which demonstrably meets the catalogue of requirements for the standard.