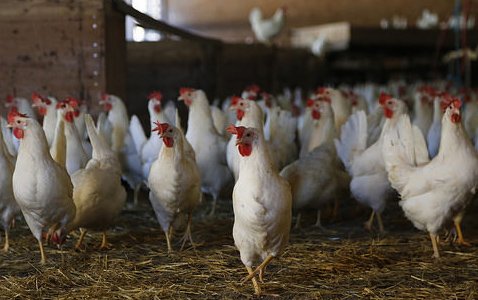 The study focused on cattle, chickens and pigs, and identified the latter two as the main con-tributors to antibiotic consumption.
Photo: © Jonas Ingold (LID)

Dramatic increase of antibiotic use in livestock expected

Antibiotic use in livestock is expected to increase by 67 per cent by 2030. This increase in antimicrobial use in animals raises serious concerns about preserving antimicrobial effectiveness in the next decades.

Antibiotic consumption in livestock worldwide could rise by 67 per cent between 2010 and 2030, and possibly endanger the effectiveness of antimicrobials in humans, according to researchers from Princeton University, the International Livestock Research Institute (ILRI), the Université Libre de Bruxelles and the Center for Disease Dynamics, Economics and Policy. This was reported by Princeton University in March 2015.

Five countries — Brazil, Russia, India, China and South Africa — will experience a growth of 99 per cent in antibiotic consumption, compared with an expected 13 per cent growth in their human populations over the same period, according to the scientists. In the United States, antibiotic consumption in animals currently represents up to 80 per cent of total antimicrobial sales.

Because of the incredible volume involved, this increase in antimicrobial use in animals raises serious concerns about preserving antimicrobial effectiveness in the next decades, the researchers report. Global demand for animal protein is rising dramatically, and antimicrobials are used routinely in modern animal production for disease prevention and as growth promoters. The study focused on cattle, chickens and pigs, and identified the latter two as the main contributors to antibiotic consumption.

Numerous studies have suggested links between the use of antimicrobials and antibiotic-resistant bacteria originating from livestock as well as their potential consequences for human health.

Two thirds, or 66 per cent, of the projected global increase in antimicrobial consumption is due to the growing number of animals raised for food production. The remaining third is attributable to a shift in farming practices, with a larger proportion of animals projected to be raised in "intensive farming systems," or “factory farms”.

Study "Global trends in antimicrobial use in food animals” (PNAS):