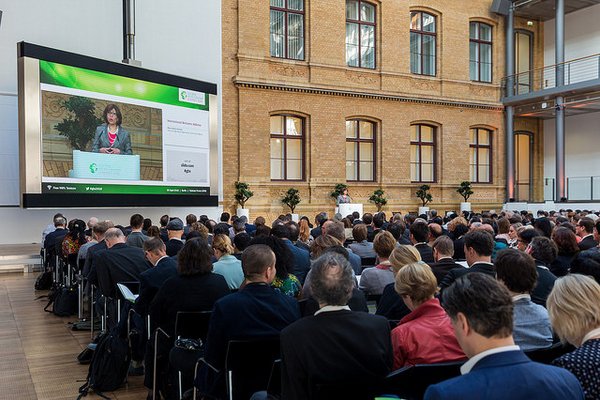 Digitalisation, biologicalisation and the future of manufacturing

Bionics, biotechnology and renewable resources – opportunities and challenges were discussed at the Global Bioeconomy Summit 2018 in Berlin, Germany.

At the 2nd Global Bioeconomy Summit, around 700 representatives from politics, science, civil society and the business sector from more than 70 countries came together in Berlin, Germany, from the 19th-20th April 2018. The event, hosted by the German Bioeconomy Council, was held to identify obstacles on the way towards a biobased economy.

The participants discussed a wide range of societal, scientific, economic and political challenges that implementing the visions of the bioeconomy, which often differed widely from region to region, was facing in the context of the Sustainable Development Goals (SDGs).

At the end of the two-day conference a communiqué was presented comprising:

From a fossil era to a renewable perspective

After an industrial and digital revolution, global society is entering a biological revolution. Bio-inspired processes, bio-intelligence, using biological material for manufacturing and socio-technical relationships are the keywords of a new dimension.

To use renewable resources means setting up global regulations and elaborating tailor-made solutions adapted to local conditions. “Shouldn’t we start to set some targets for the global bioeconomy in the same way as this has been done for climate change under the Paris Agreement?” remarked Joachim von Braun, Co-Chair of the German Bioeconomy Council.

The international legal framework started with the Brundtland Report in 1987, having come through the Convention on Biodiversity in 1992 and its regulations for access and benefit sharing mechanisms. In 2010, the Nagoya Protocol was formulated, dealing with access to genetic resources and the fair and equitable sharing of benefits arising from their utilisation.

“How do we handle intellectual property rights? What about biopiracy? Who is benefiting – and who isn’t? We are going to enter a new dimension of knowledge, and we have to hurry up,” said Klaus Töpfer, former Executive Director of the United Nations Environment Programme (UNEP).

Christian Patermann, an international bioeconomy advisor, opted for bioeconomy development goals similar to the SDGs to pave the way for communication and harmonisation at global level.

But thinking globally can also imply negative effects. The Tragedy of the Commons was not a new problem, but had been known for approximately 500 years. Global action led to interaction and interlinkage, but also to interdependence, comparable to a “butterfly defect”. This in turn might result in a collapse of systems, as had been the case with the financial crisis in 2010 or was reflected in the present digitisation debate about Facebook, said Ian Goldin, Director of the Oxford Martin Programme on Technological and Economic Change.

Beside an intelligent use of biomass – e.g. finding solutions to use the biomass of the sharp sugarcane leaves instead of burning them in harvesting – civil society organisations are critically observing ongoing biotechnological development. Key discussions in several workshops often referred to society’s acceptance of research and development. Earning trust in society and governance was key to a transparent and successful way forward. Social scientists should get on board bioeconomy development to turn the holistic approach into practice, summarised a moderator the discussion in an industry workshop on “The Great Convergence”.

To Gertrude Ngabirano of the East African Science and Technology Commission, global trade is key to driving the bioeconomy forward. Ngabirano cited the commodity cotton as an example of a distorted trade. Africa produced the raw material, which was then processed in the European Union or the USA. But Africa also closed the cycle by way of receiving used clothes. International trade agreements were tailored to developed countries’ needs. In order to take part on the benefiting side, the African countries were starting to argue for small incremental taxes, she said. Africa needed equal partnerships, otherwise it would be a dead continent with its growing population and increasing waste, concluded Gertrude Ngabirano.

About the Bioeconomy Council of the German Federal Government: The Federal Ministry of Education and Research (BMBF) and the Federal Ministry of Food and Agriculture (BMEL) established the Bioeconomy Council as an independent advisory board to the Federal Government in 2009. The Council aims at establishing a cross-sectoral, knowledge-based bioeconomy which generates sustainably created products and services, thus combining economic growth with the objective of environmental compatibility. www.bioökonomierat.de/en