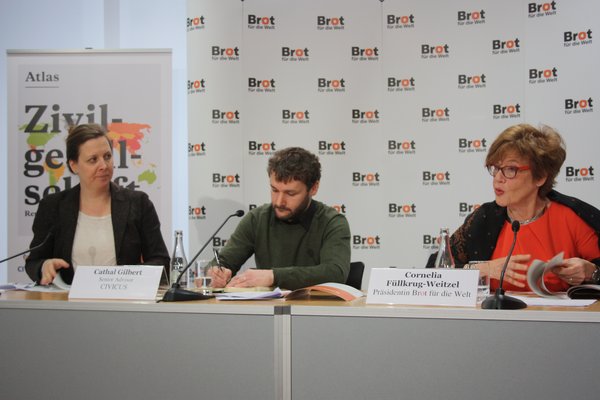 While the right to food enjoys world-wide recognition, in reality, it is often ignored. The same applies to women’s rights and to the right to education and political participation. A strong civil society is required to assert these rights and ensure inclusive growth. However, the recently issued “Atlas der Zivilgesellschaft” paints a bleak picture in this respect.

“Just two per cent of the world population live in countries in which they can exercise their basic rights to freedom of expression and association without restrictions. And more than half of these people live in Germany!” said Cornelia Füllkrug-Weitzel, President of “Brot für die Welt”, in Berlin, Germany, in late January 2018 in Berlin, presenting the “Atlas der Zivilgesellschaft” that Brot für die Welt had published together with the World Alliance for Citizen Participation (CIVICUS).

The story behind it

When the Cold War was over, the world experienced an upsurge of democracies and civil societies that took their rights into their own hands. In 1993, the World Conference on Human Rights was held in Vienna, Austria. The Vienna Declaration and Plan of Action are still regarded as a milestone in developing the protection of human rights. The Declaration and Plan of Action emphasised the universality and indivisibility of human rights, recognised the rights of women as human rights and referred to human rights as a cause of international importance. This was also the year in which CIVICUS was founded. Looking back, Julia Duchrow, who heads the Human Rights and Peace division at Brot für die Welt, said that this was “a moment of society waking up”.

Today, however, the situation is significantly more complicated. CIVICUS head of research Cathal Gilbert pointed out the problem of shrinking space for civil societies in all continents, and also within the European Union. The Atlas is based on a monitoring of 20 civil society organisations world-wide and contains the categories “open”, “narrowed”, “obstructed”, “repressed” and “closed”. This year, the UN Declaration of Human Rights is celebrating its 70-year anniversary, although just 22 nations, among them New Zealand, Germany and Sweden, belong to the “open” countries. In 21 countries, including Bahrain, Iran or Vietnam, the space for civil society has disappeared completely.

Cornelia Füllkrug-Weitzel reported on restrictions in the day-to-day work of her organisation. The accounts of regional aid partners are closed to financial support, they are only allowed to receive a certain share of financial assistance from abroad, or the organisations are required to go through the tedious process of having themselves registered anew every two years. In the worst case, they are closed, and their staff are threatened or even murdered.

The Atlas shows that countries with an open civil society have attained a higher level of development. Conversely, only small groups of the population are prosperous in the countries without civil society participation. In Chad, for example, state revenue from the sale of mineral oil totalled 13 billion euros last year, although this country is among the poorest in the world.

Although world trade is often criticised, the positive effects of “Aid for Trade” cannot be denied – provided that trade is inclusive. “Of course we demand a trade policy that is also guided by a human rights policy,” Duchrow explained. And only an active and strong civil society could create fair trade conditions.

Meanwhile, South-South trade has intensified, and India and China are two economic heavyweights that are entering agreements with other states themselves. However, according to the world atlas, both countries are exporting their rejection of democracy and human rights to smaller and poorer authoritarian states. CIVICUS and Brot für die Welt therefore fear that, in the course of the global race for ever scarcer natural resources, a downward spiral could also develop regarding the rights of civil societies.

The role of development co-operation

Agenda 2030 contains clear provisions – education and enough to eat as well as access to energy are to apply to all people everywhere. The precondition for this is referred to in Goal 16: “Promote peaceful and inclusive societies for sustainable development”. Germany’s Federal Ministry for Economic Cooperation and Development (BMZ) makes use of sanctions against inequality via budget support. “Conditionality in development co-operation is a difficult topic,” Duchrow maintained.

Retrograde open society developments were no doubt a consequence of the 2001 terrorist attack on the World Trade Center. In the context of counterterrorism, restrictions were being introduced and tolerated, also in Africa, where Daesh affiliates were on the rampage. However, Duchrow argued, countries that were repressive themselves must not be supported in combating terrorism or given support to further develop their security forces. In these countries, it would make more sense to strengthen civil society instead of strengthening their governments.

This conclusion is also arrived at in a German Institute of Global and Area Studies (GIGA) examination of civil society in autocracies. In the context of development co-operation, countries such as Algeria, Mozambique or Vietnam ought to be urged to adopt legislation guaranteeing their citizens human rights.