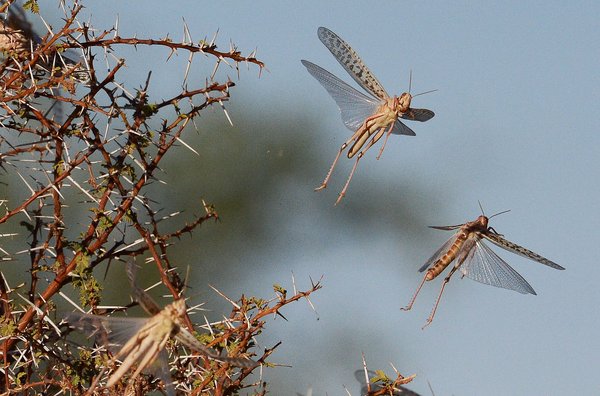 The presence of recently discovered Desert Locust infestations in Yemen, where conflict is severely hampering control operations, poses a potential threat to crops in the region, the Food and Agriculture Organization of the United Nations (FAO) warned in April 2016. FAO urged neighbouring countries, Saudi Arabia, Oman and Iran, to mobilise survey and control teams and to take all necessary measures to prevent the destructive insects from reaching breeding areas situated in their respective territories.

Strict vigilance is also required in Morocco and Algeria, especially in areas south of the Atlas Mountains, which could become possible breeding grounds for Desert Locust that have gathered in parts of the Western Sahara, Morocco and Mauritania, FAO added.

A very small swarm of Desert Locusts eats the same amount of food in one day as about 35,000 people and the devastating impact locusts can have on crops poses a major threat to food security, especially in already vulnerable areas.

In November 2015, FAO warned that heavy rains that fell in northwest Africa, the Horn of Africa and Yemen could favour Desert Locust breeding (Rural 21 reported).

Now, groups of juvenile wingless hoppers and adults as well as hopper bands and at least one swarm formed in March on the southern coast of Yemen, where heavy rains associated with tropical cyclones Chapala and Megh fell in last November.

According to FAO experts, the extent of current Desert Locust breeding in Yemen is not well known, since survey teams are unable to access most areas. However, as vegetation dries out along the coast more groups, bands and small swarms are likely to form.

There is a moderate risk that Desert Locusts will move into the interior of southern Yemen, perhaps reaching spring breeding areas in the interior of central Saudi Arabia and northern Oman.

There is a possibility that this movement could continue to the United Arab Emirates, where a few small swarms may appear and transit through the country before arriving in areas of recent rainfall in southeast Iran.

FAO also warned that in northwest Africa, small groups and perhaps a few small swarms could find suitable breeding areas in Morocco (Draa Valley), Mauritania (near Zouerate) and Algeria. In addition, some small-scale Desert Locust breeding is likely to occur in southwestern Libya, but numbers should remain low.

The organisation stressed the need for close monitoring in all of these areas over the next few months to prevent the insects from forming large, destructive swarms.

The Desert Locust situation in other countries remained calm in March, with no significant developments detected or expected.