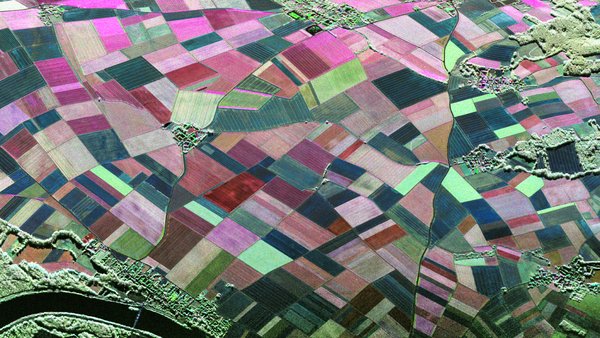 Space-based geo information is playing an increasing role in agricultural production. At the Global Forum for Food and Agriculture, experts reported on satellite monitoring as an important contribution to better transparency in the global agricultural market.

Satellite monitoring of the major agricultural production areas in the world and of areas with food security issues has become an important tool in the agricultural sector. It makes a significant contribution to better transparency in the global agricultural market.

Remote sensing represents a useful tool in data collection on the development status regarding both important food crops such as rice, maize and wheat and carbon sequestration in tropical forests or logging rates in tropical rainforests. Neither would precision agriculture be conceivable without the use of satellites.
Having recognised the considerable potential that remote sensing offers in the context of measures to achieve food security, the agriculture ministers of the G20 countries launched the Earth Observations Global Agricultural Monitoring (GEOGLAM) initiative in 2011. The G20 Ministerial Declaration states that GEOGLAM “will strengthen global agricultural monitoring by improving the use of remote sensing tools for crop production projections and weather forecasting”. At the same time, the Agricultural Market Information System (AMIS) was created. AMIS is an inter-Agency Platform to enhance food market transparency and encourage co-ordination of policy action in response to market uncertainty.

Both initiatives were presented at a specialist event during the Global Forum for Food and Agriculture (GFFA) in Berlin, Germany, in January, and their employment in global harvest forecasts, and hence their contribution to food security, was discussed.

AMIS had become an important instrument in enhancing global market transparency, AMIS Secretary Abdolreza Abbassian told the specialist panel at the meeting. The AMIS secretariat has been set up within the framework of the United Nations Food and Agriculture Organization (FAO). It initially focuses on four crops that are particularly important in international food markets, namely wheat, maize, rice and soybeans.

One of the most important objectives of AMIS is to establish and pass on globally standardised statistical data on production, trade, utilisation and stocks for the commodities of participating countries. The AMIS secretariat receives data e.g. on rice harvests in Asia from remote sensing, explains Abdolreza, adding that the market monitor is a further instrument that tracks current and expected future trends in international food markets.

GEOGLAM - Group on Earth Observations Global Agricultural Monitoring, which was presented by Dr Michel Deshayes of the Group on Earth Observations (GEO), is a further important product of the G20 Initiative. A total of 88 countries are involved in GEOGLAM. Its chief objective is to gather data on harvest forecasts and meteorological data that are then stored in an open data system. Deshayes explained in Berlin that the growth status of crops can be monitored with the aid of the satellite data. Furthermore, important weather data can be collected via satellite, enabling the provision of a regional early warning system. According to Deshayes, such data can be a significant contribution to making political and market-oriented decisions in time to secure food supplies for the population and, additionally, to plan a possible export of surpluses at an early stage.

Alongside the initiatives of the G20, individual countries are also making use of remote sensing. For example, the Embrapa centre of the Brazilian Agriculture Research Corporation has already long been employing the technology in agriculture and forestry, reports Dr Mateus Batistella. For example, with the aid of remote sensing, it establishes land degradation of pasture land, compiles land classification maps and screens Amazon Rainforest stocks. According to Batistella, such data provides important information on the influence of climate change on agriculture and forestry that can be relevant to agricultural policy decisions for the future.

Finally, Dr. Norbert Schmitz of the International Sustainability & Carbon Certification (ISCC, Cologne, Germany) reported on the use of remote sensing data to support sustainability certification. Data on the impact of land-use change, such as having smallholder agriculture replaced by large-scale palm-oil plantations, can be monitored via remote sensing, and conclusions can be drawn from this regarding sustainable land use.