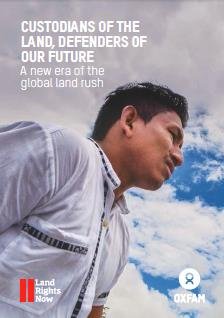 Custodians of the land, Defenders of our future

Millions of hectares of land have been acquired by investors to meet rising demand for food and biofuels, or for speculation at the expense of those who need the land most and are best placed to protect it says Oxfam report.

According to ‘Custodians of the land, Defenders of our future’ a new research shared with Oxfam by the watchdog group Land Matrix Initiative; millions of people face being displaced from their homes as new data shows land sales covering an area the size of Germany are now under contract.

Seventy-five per cent of the more than 1500 land deals sought over the last sixteen years now have contracts and their intended projects are getting up and running, says Oxfam.
Of these deals, up to 59 per cent cover communal lands claimed by indigenous peoples and small communities, whose traditional ownership is rarely formally recognised by governments. Only a small fraction involved real dialogue with communities. Incidents of murder and aggressive eviction of entire villages are an ongoing issue, notes Oxfam.

In the report published in September 2016, Oxfam reveals fresh data on the global land rush and profiles six cases where lives have been shattered by threats to their land.

The report also details what governments must do to protect these and other people, and the environment. Defending land rights is inextricably linked to protecting the earth’s natural diversity and the fight against climate change. Oxfam’s report is part of the ongoing Land Rights Now campaign, which the organization helped launch alongside hundreds of others. The campaign is calling for the amount of land these communities own to double by 2020.