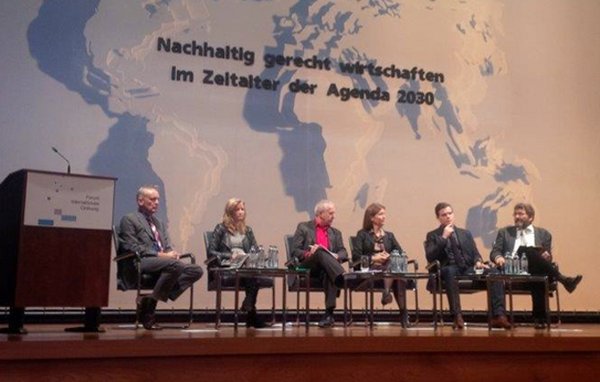 How effective is the United Nations Global Compact, and what must corporate efforts look like for it to have a sustainable impact promoting fairness and development? KfW Development Bank had a look at these issues at its Berlin Expert Talks on Globalisation.

The year 2000 saw the launch of the United Nations Global Compact. In this voluntary initiative, corporations commit to implement universal sustainability principles and to take steps to support UN goals. Just how effective is the initiative, and what must corporate efforts look like for it to have a sustainable impact promoting fairness and development? KfW Development Bank had a look at these issues at its Berlin Expert Talks on Globalisation in mid-November 2016.

“We are a guide dog, not a watchdog,” Executive Director Lise Kingo explained, describing the purpose of the Global Compact. Today, the initiative, which was launched by UN Secretary-General Kofi Annan in 2000 “to give globalisation a more trusted face,” comprises 9,148 businesses and more than 4,000 organisations from a total of 168 countries. By participating, corporations commit themselves to observing ten principles anchored in the UN on the environment, labour rights, anti-corruption and human rights. They are obliged to report on compliance with the principles in their activities in an annual Communication on Progress (COP). If they fail to do this, they are thrown out. “More than 5,000 businesses have already been delisted,” Kingo told the meeting.

The Sekem Group has participated in the Global Compact since 2004. The guiding notion of the initiative, which was founded in Egypt in 1977 (Sekem is Old Egyptian for “vitality”), is to link up economic, social and cultural development. In concrete terms, this means that Sekem turns desert areas into fertile land to practise biodynamic agriculture, generates upstream and downstream jobs and erects schools. The Medical Centre, opened in 1996, cares for staff, school pupils and the rural population in the neighbourhood. A university has also been founded.

Under the Slogan “Plug in the world”, the Berlin-based company Mobisol provides low-income customers in Africa with solar home systems. These systems can be installed in just 1.5 hours and can power LED lamps and radios, televisions and refrigerators. They can also be used to charge mobile phones, giving households the opportunity to run small businesses at the same time. “We have estimated that around 30 per cent of our customers are generating an income with our appliances,” says Chief Operation Officer Joachim Hauschopp. “On average, this amounts to 35 US dollars a month.” So far, 50,000 solar home systems from Mobisol have been supplying just below 300,000 people with environmentally friendly power. Payment is via SMS, and there is a 36-month hire purchase option. The company’s own academies provide local training, while its repair shops create jobs and local value added.

So is everything hunky-dory with corporate responsibility? “With our firm, and we are talking about 100 staff in Berlin und 500 in Africa, we are in good control of developments,” says Hauschopp. However, the supply chains are complex. Even though it is familiar with many of its Asian suppliers, this medium-sized company has difficulty ascertaining whether the high environmental and social standards are complied with right at the end of the chain, the COO explains. Sekem’s Sustainable Development Officer, Maximilian Abouleish-Boes, is above all worried about bureaucratic hurdles when it comes to gaining access to new areas to create fertile land in the desert. “We are asking ourselves why the government isn’t offering more support for this important task,” Abouleish-Boes says.

The question remains whether the Sustainable Development Goals are helping the companies to implement their ambitious goals. “I can’t really see any major support,” Abouleish-Boes maintains. But he adds that topics that one has long been campaigning for, such as reducing carbon dioxide emissions in agriculture and promoting land restoration instead of land degradation, are now being highlighted by the SDGs. “Our activities relate to a number of the SDGs, such as access to affordable renewable energy and promoting education,” Hauschopp explains. “I think that the SDGs do help. For example, many countries in Africa are now pursuing an entirely different approach in electrification by opting for off-grid in rural areas and only pursuing ‘big’ strategies’ where large amounts of electricity are really needed.”