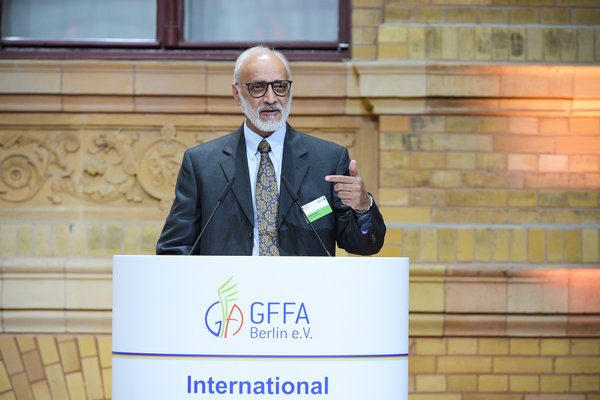 Smallholders play a vital role in ensuring food supply world-wide, but need support to cope with growing water shortage problems. What the agriculture and food industry on the one hand and politics on the other can do to support them was discussed at the International Business Panel held during the Global Forum for Food and Agriculture in Berlin, Germany.

More than 90 per cent of the water reserves world-wide is consumed in the agricultural and agribusiness sector. Estimates by the United Nations suggest that the global demand for water in agriculture will increase by about 20 per cent by 2050 given the growing world population. What can the agriculture and food industry do to use the resource water more carefully and sustainably while at the same time not jeopardising the aim of food security? And how can politics support the respective measures? These were questions addressed by the International Business Panel held during the Global Forum for Food and Agriculture (GFFA) in Berlin, Germany, in January.

It’s not just size that counts

“Not every product can be produced at every location,” Germany’s Minister of Agriculture Christian Schmidt maintained, referring to one of the principles of sustainable water use. For example, practising animal husbandry in arid regions suffering from water shortage was unviable. The private sector was needed to develop and implement technical options for an economical use of water as a natural resource. However, with a view to the prospects for precision agriculture, digitisation and “Big Data”, Schmidt warned against excessive concentration processes that were leading to solutions no longer being provided to regional or local problems. And even if smallholders were unable to secure world food supplies on their own, relying solely on large farms would mean many people falling by the wayside. “We have to ensure that in 2025 and beyond, people will continue to live in all regions of the world and be able to meet their needs,” the minister said.

“No country – perhaps except for one or another city state – has so far escaped from poverty without integrating smallholders,” said Rodger Voorhies, Director of the Financial Services for the Poor programme at the Bill & Melinda Gates Foundation. Financial services were not the cure for poverty; but if an African smallholder had the opportunity to finance input when needed, as a survey by his organisation demonstrated, this could enhance the productivity of his enterprise by a quarter and raise household savings by 17 per cent. “This can already be crucial to whether his children will be able to go to school or not,” Voorhies explained. To this end, the organisation is supporting the development of digital payment systems and is also working on “Africa’s first digital soil map”.

“We use the means of digitisation in order to spread knowledge,” said Thomas Böck, member of the Claas Group Executive Board, explaining what he regards as one of his enterprise’s objectives in addition to providing technical solutions. Data could be stored and combined with traditional local knowledge. This did not necessarily imply the use of large-scale machinery. Measures to reduce soil compaction or to lower nutrient discharge could be transferred to the conditions that smallholders were producing in. The latter could, for example, receive advice on the use of, say, fertiliser e.g. via their smartphone.

“Over there is here!”

According to the Executive Director of the United Nations World Food Programme (WFP), Ertharin Cousins, the private sector all too often regards its activities in the countries of the South as corporate social responsibility, although it ought to realise that these are above all business opportunities. Eighty per cent of the 80 million people that the WFP supports each year live in climate marginal places and are regularly affected by phenomena such as flooding or drought. “If we don’t take action, problems such as migration and conflicts will become worse,” Cousins warned, adding that one should not forget that “over there” had long become “here”.

So what can politics do? “Get the incentive structure right so that farmers change their behavioural pattern,” Indian agricultural economist and policy consultant Ashok Gulati maintained. Gulati explained that many countries had subsidised their agriculture for years in order to keep food prices low. This had resulted in a massive wastage of water and energy. Instead, farmers had to make money out of saving water, Gulati said. Trade policies for water intensive crops would also have to change so that they could only be grown where sufficient water was available. In addition, investing in water-saving technologies was important. In the case of open canal systems, water efficiency was at 40 per cent, and with drip irrigation, it was at 90 per cent, Gulati explained, adding that “the Indian Government spends 15 billion US dollars for canals and one billion US dollar for drips and sprinklers”. The last item he referred to was strengthening institutions responsible for water management in order to resolve the increasing conflicts in water use. “This is the weakest part of the story,” Gulati said.

China has already taken several steps in this direction. “We only have 2,100 cubic metres for every individual, and this adds up to a quarter of the globally available amount,” Minister of Agriculture Han Changfu said, highlighting the urgency of the problem. In addition, availability varied considerably among the different provinces. In order to better distribute the scarce resource, the country has awarded water use rights. In addition, it has opted for water-saving irrigation technologies and cultivation methods. The result: China succeeded in reducing its water consumption from 392 billion cubic metres in 1989 to 387 billion cubic metres in 2014; agriculture’s share of water consumption dropped from 75.3 per cent to 63.5 per cent. In addition, the use of pesticides and fertilisers is to be reduced in order to lower water pollution. Here, the country had recently introduced the polluter pays principle. “We want to promote green development enabling agriculture to become sustainable while simultaneously increasing its competitiveness,” the minister stressed.