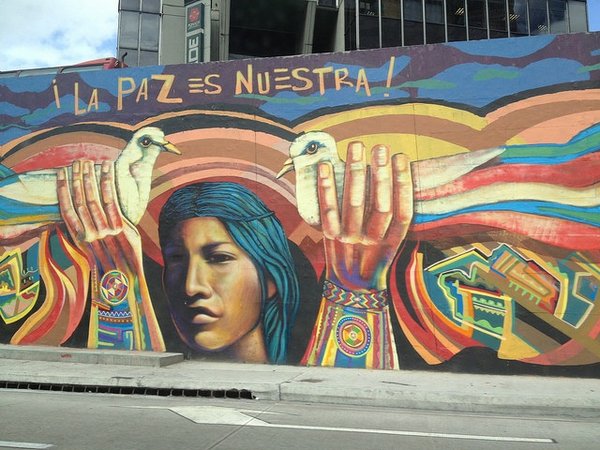 Pleading for peace: A graffito in the city of Bogotá. Drug trafficking has played a major role in Colombia's armed conflict.
Photo: Juan Cristobal Zulueta

A new scheme to promote cocoa production in Colombia is to boost prospects for smallholders caught up in the aftermath of years of armed conflict and flawed attempts to root out coca-growing.

The first batch of graduates from training and further education measures in the Cacao para la Paz (Cocoa for Peace) programme took part in a graduation ceremony in Santa Marta last November. Cacao para la Paz was launched last June as part of Colombia’s post-development strategy in a bid to boost smallholder cocoa production as an alternative to illicit coca crops in areas most affected by the country’s years of armed conflict. These areas also happen to be the country’s richest in biodiversity and are in turn particularly suitable for high-quality cacao growing. With such an asset, Colombia could become a significant cocoa producer.

The initiative seeks to strengthen institutions in the cacao-chocolate value chain by providing education and training measures, supporting collaborative research and offering technical assistance. The education programme comprises training measures for producers and trainers, postgraduate education and internships with relevant companies in the USA. Colombia’s Corporation of Agricultural Research (Corpoica), the US Department of Agriculture, the US Agency for International Aid (USAID), the United Nations Office on Drugs and Crime (UNODC) and the International Center of Tropical Agriculture (CIAT) are among the wide range of institutions and organisations supporting the scheme.

According to the latest Colombia Coca Survey, in all, coca growing has affected 23 of Colombia’s 32 departments, although three have now been free of coca for four years and a further seven are on their way to becoming coca-free. The Survey, jointly produced by Colombia’s Environment and Sustainable Development Ministry and the United Nations Office on Drugs and Crime (UNODC), shows that 81 per cent of the coca crop area is concentrated in five departments. Crop area increased by almost 40 per cent, from 69,000 hectares in 2014 to 96,000 hectares in 2015, reaching twice the size of the area in 2013. Cocaine production was at an estimated 646 metric tons in 2015, having increased by 46 per cent compared to 2014.

The Coca Survey stresses that coca crops are a threat to Colombia’s cultural environmental diversity. In the indigenous reserves, compared to 2014, crops increased by 52 per cent, to 11,800 hectares, in 2015. In the regions belonging to Afro-Colombian communities, crops increased by 51 per cent in the same period, reaching a level of more than 16,000 hectares.

The government-run Institute of Hydrology, Meteorology, and Environmental Studies (IDEAM) states that deforestation increased by 16 per cent from 2013 to 2014 owing to mining, infrastructure projects and agricultural development, in which illicit crop plantations played a major role. Elsy Morales, adviser to the Director-General of the National Natural Parks of Columbia (PNN) agency, is concerned about illicit crop growing in protected areas, and explains that settlers not earning an income find the parks particularly attractive. Two national parks, Sierra de la Macarena and Nukak, account for 58 per cent of the protected area under coca cultivation, although coca growing is increasing most strongly in two other parks, Paramillo and Catatumbo.

Colombia is the Western Hemisphere’s largest recipient of US assistance. Under Plan Colombia, launched in 2000 during Bill Clinton’s presidency, the country is receiving 358 million USD a year to tackle the coca problem, and since the initiative’s inception, ten billion USD has been provided in all. Plan Colombia was conceived in collaboration with the country’s then President Andrés Pastrana Arango to combat Colombian drug cartels and left-wing insurgents. Part of the Plan was the aerial eradication of illicit crops. An area of 380,000 hectares, more than eight per cent of Colombia’s arable land, was sprayed with Monsanto’s glyphosate-based herbicide Roundup Ultra between 200 and 2003.

According to the Colombian Council for Human Rights and Displacement, alone in 2001 and 2002, this practice resulted in 75,000 people being displaced nationwide, many of them smallholders who moved their crops to forest areas and national parks. The effects of the herbicide on plants and animals lasted for years, and people living in the sprayed areas complained of skin and respiratory diseases and other illnesses.

“Colombia has been the most successful nation-building exercise by the United States in this century,” said US Ambassador to Colombia William Brownfield in 2009. The results of the Colombia Coca Survey would suggest otherwise. Growing cacao instead of coca could be a more sustainable strategy.