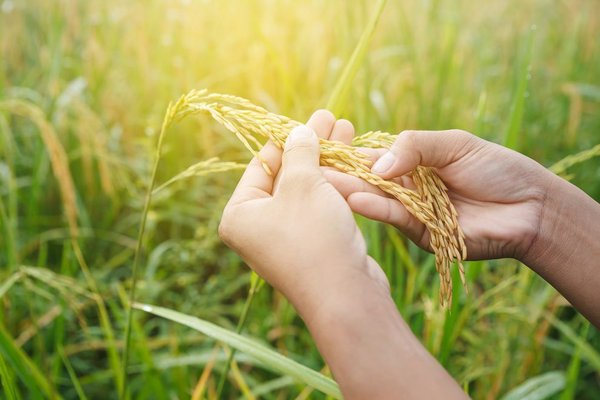 Rice is an important staple food for billions of people. More CO2 in the atmosphere lowers its nutrient content.
Photo: © flickr/ Martin Fisch

Rice is one of the chief foods for more than two billion people world-wide. In future, however, the nutrient content of this grain could be measurably reduced. The reason for this is the rising concentrations of carbon dioxide in the air, as a study by an international team of researchers demonstrates. The scientists warn that this could result in a lack of nutrients among poorer People.

Many effects of higher CO2 levels have an impact on global nutrition. Rising temperatures can reduce yield volumes, while droughts and floods can destroy harvests.

Now, a survey by an international team of researchers from Australia, China, Japan and the USA has demonstrated a further phenomenon. As CO2 content increases, the nutrient content of rice is lowered. This could have a drastic impact on the nutrition of two billion people whose staple food is rice, head of research Lewis Ziska, a scientist working for the US Ministry of Agriculture, fears. The study, of which Ziska was one of the co-authors, was presented in the specialist journal “Science Advances” in late May.

The scientists examined how rice responds to higher CO2 values in field tests. For their survey, they planted experimental fields with 18 different varieties of rice in Japan and China. With special gassing equipment, the plants were exposed to CO2 concentrations of around 570 parts per million (ppm), which corresponds to the values that could be reached in the atmosphere by the end of this century.

What is special about the method, known as Free-Air Carbon dioxide Enrichment (FACE), is that it works without a greenhouse or a climate chamber. “We know that plants in plastic or glass greenhouses do not grow in the same way as they do out in the open, explains co-author Kazuhiko Kobayashi of the University of Tokyo, Japan. This is why he and his colleagues constructed a system in which the rice plants growing out in the open were supplied with additional CO2 via a system of gas jets positioned at a level of 30 centimetres.

Once the rice was ready for harvesting, the researchers analysed the content of various nutrients and trace elements, including B-vitamins, vitamin E, zinc, iron, calcium, and proteins.

It was revealed that with rising CO2 values, the nutrient content of the rice grains dropped measurably among almost all rice varieties. For example, protein concentrations dropped by ten per cent on average, while iron content fell by eight per cent and zinc content by five per cent.

The researchers had also detected similar trends among other cultivated plant species. But the results for the B-vitamins were new. The content of vitamins B1, B2 and B5 fell by between 12 and 17 per cent, while the concentration of vitamin B9 dropped by even 30 per cent, as the scientists report. In contrast, no significant changes were detected among calcium and vitamin B6. Vitamin E content even rose slightly among most of the rice varieties.

The researchers believe that this effect caused by rising greenhouse gas emissions could have rather serious consequences. “Rice has been a staple food for people in Asia for thousands of years, and its significance is rapidly increasing in Africa,” says co-author Kristie Ebi of the University of Washington in Seattle, USA, adding that rice supplies not only calories but also valuable proteins and vitamins. “Reducing the nutrient quality of rice could therefore impair the health of millions of people.”

According to the scientists, rice provides more than half of daily calorie and protein intake for around 600 million people, especially in Southeast Asia. Since poor people in particular cannot afford other food, they are especially threatened by the falling nutrient contents of rice, they warn. “This is a risk posed by the burning of fossil fuels and deforestation that has so far been underestimated,” says Ebi.