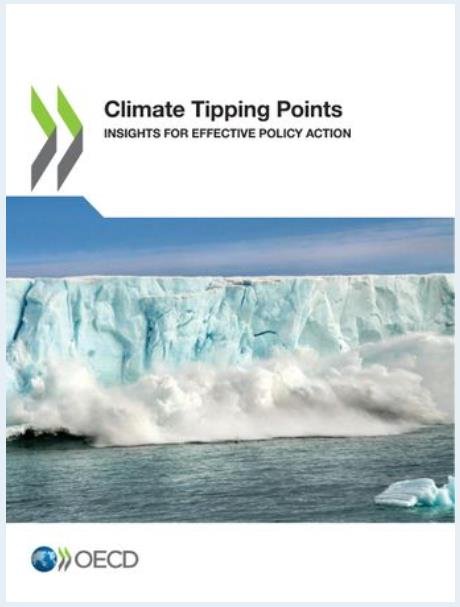 We need to change the way we treat tipping points in climate policy today, says a new report. Recommendations are provided on adjusting climate risk management strategies to better reflect the risks of tipping points across mitigation, adaptation and technological innovation.

A new report reviews evidence that overshooting 1.5°C could push the earth over several tipping points, leading to irreversible and severe changes in the climate system. The report, entitled Climate Tipping Points – Insights for Effective Policy Action, was published by the Organisation for Economic Cooperation and Development (OECD) in December 2022.

The authors’ goal was to review the state of knowledge on climate system tipping points and to make recommendations for a wide range of stakeholders on improving climate risk management strategies to better reflect the risks of crossing tipping points.

If triggered, tipping point impacts will rapidly cascade through socio-economic and ecological systems, leading to severe effects on human and natural systems and imposing important challenges for human adaptation. Of particular concern are the likely collapse of the West Antarctic and Greenland ice sheets and the abrupt melting of permafrost grounds in the Arctic, which would result in additional sea-level rise and greenhouse gas releases, leading to more warming.

Based on the most recent science and consultations with renowned experts, the report argues that it is no longer appropriate to consider the risk of crossing tipping points as low probability. Overshooting 1.5°C could likely lead to irreversible and severe impacts, which must be avoided, heightening the urgency to drastically reduce emissions. Committing to net-zero emissions by mid-century is not enough in itself; it is about achieving net-zero with urgent, early and deep reductions in emissions this decade.