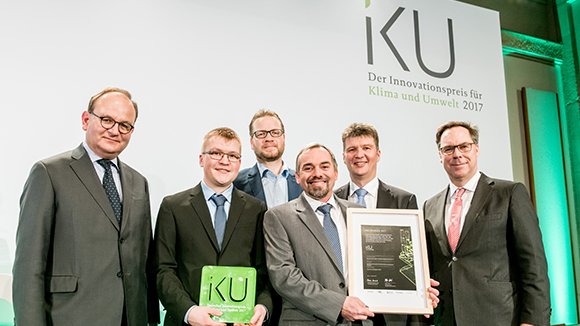 At the award ceremony of the German Innovation Prize for Climate and Environment, the development service ‘Christliche Fachkräfte International’ received the special award for a project in Uganda. The association uses corncobs as waste biomass to make briquettes, which reduces logging in Uganda and is intended to enhance biodiversity.

The German Federal Ministry for the Environment, Nature Conservation, Building and Nuclear Safety (BMUB) and the Federation of German Industries (BDI) awarded the Innovation Prize for Climate and Environment (IKU) at a ceremony in Berlin. The development service ‘Christliche Fachkräfte International’ (CFI) received the special award ‘Innovation and biological diversity’. This honours a project in Uganda where briquettes are manufactured from corncobs, reducing logging and giving poorer people in particular access to better food hygiene.

The German innovation prize for climate and the environment IKU is a prestigious award, and this is the sixth year that it has been jointly presented by BMUB and BDI. Winners were selected by a prominent jury chaired by Professor Ottmar Edenhofer, director of the Mercator Research Institute on Global Commons and Climate Change, Berlin/Germany.

Particular emphasis was laid in the award citation on the fact that ‘Christliche Fachkräfte International’ and its Ugandan partner Ndejje University are backing the use of indigenous renewable resources and biodiversity. The Christian university north of the capital of Kampala has researched together with German development workers for several years on how renewable energy and new processes can counter the dramatic forest logging.

Besides strong population growth, Uganda has also been struggling for years with massive migration by refugees from the civil war areas of the eastern Congo and southern Sudan. Electricity and other modern energy sources are only available in larger cities, 80 per cent of the population are without access to the electricity grid.

According to the UN Food and Agriculture Organization FAO, Uganda grows around 2.7 million tons of corn. Millions of corncobs rot after removal of the grains.

In the joint project between Ndejje University and the development service, employees first created awareness that corncobs are not ‘waste’ but a valuable raw material.

Staff at Ndejje University developed a process in which corncobs are pyrolyzed to charcoal, ground, mixed with charcoal residues and molasses and finally pressed into briquettes. The necessary equipment, such as hammer mills, extrusion and screw presses, are electrically operated, with significantly higher throughput. The process can also be used by small businesses, as CFI notes in its press release.

According to surveys, the population of Uganda is willing to move to sustainable and easily available fuels. The temperatures achieved and flammability of the new briquettes can compete successfully with the widespread use of charcoal. Considering the poverty, education and market alternatives of Uganda’s population, this can lead to a successful move to more sustainable and cheaper fuels.