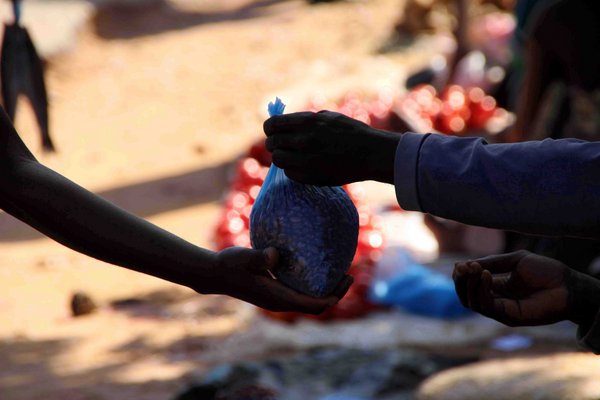 A “business as usual” approach would leave 653 million people still going hungry by 2030. (A market in Malawi)
Photo: © Katherina Lowngwe

Global Partnerships were addressed by a Global Policy Forum workshop held in Bonn, Germany, early in February. The meeting also addressed the issue of food security.

The 2030 Agenda and its Sustainable Development Goals (SDGs) have given the emergence of partnerships between private and public actors in the health, food and energy sectors even more impetus. The trend towards global partnerships and multi-stakeholder initiatives is motivated by the assumption that governments lack both the financial resources and the appropriate structures to cope with global problems, whereas collaborative ventures involving the private sector as well as civil society are held to be pragmatic, solution-oriented and effective. Global Policy Forum (GPF) invited government and NGO representatives to a workshop in Bonn, Germany, in early February to discuss whether Global Partnerships really are a panacea to implement the 2030 Agenda.

A current 793 million people are affected by hunger world-wide, while two billion people suffer from micro-nutrient deficiency and 160 million people are chronically undernourished. Also, 1.9 billion people are overweight or obese. Heike Henn, Head of Division “Food and Nutrition Security; Global Food Policy” at the German Federal Ministry for Economic Cooperation and Development (BMZ), referred to an estimate by the United Nations Food and Agriculture Organization that a “business as usual” approach would leave 653 million people still going hungry by 2030, meaning failure to reach SDG 2, ending hunger, achieving food security and promoting sustainable agriculture. Addressing this situation required a political and financial effort reaching far beyond what Official Development Assistance and development co-operation was able to provide, Henn maintained, and argued that this was where Global Partnerships had a role to play.

Grow Africa is one of the Global Partnerships aimed at boosting the agricultural sector. It was founded jointly by the African Union, the New Partnership for Africa’s Development and the World Economic Forum in 2011. Its aim is “to enable countries to realise the potential of the agriculture sector for economic growth and job creation, particularly among farmers, women and youth”. Collaboration is between governments, international and domestic agriculture companies and smallholders. Grow Asia, launched by the World Economic Forum in collaboration with the Association of Southeast Asian Nations, brings together smallholders, governments, companies, NGOs and other stakeholders in Southeast Asia to “develop inclusive and sustainable value chains that benefit farmers”.

CARI, the Competitive African Rice Initiative, commissioned by the BMZ, started in 2013 with a view to “lastingly reducing poverty through higher productivity in rice growing, higher efficiency and better access to financial services in Nigeria, Ghana, Burkina Faso and Tanzania”. The BMZ also provides 27 per cent of financing, while the Bill & Melinda Gates Foundation contributes 73 per cent.

Marita Wiggerthale, Policy Advisor on Food Security and Agricultural Issues at Oxfam Germany, noted that CARI Nigeria had failed to meet many of the BMZ requirements for the initiative. For instance, it was recommending the use of pesticides such as lamba-cyhalothrin, which is highly toxic for humans, whereas BMZ provisions ruled out the use of dangerous pesticides. Furthermore, the ministry required that measures maintain or even enhance soil fertility, an aspect that was virtually ignored in the Nigerian programme. CARI Nigeria also failed to meet BMZ’s human rights standards.

Launched in 2012, the G8 New Alliance for Food Security and Nutrition is a partnership that brings together stakeholders including African governments, the private sector, civil society and donors “to promote inclusive, agriculture-led growth in Africa”. With the Bagré Growth Pole in Burkina Faso, started in 2012, the New Alliance seeks to assist the country’s government in developing the community of Bagré as an agribusiness location. Oxfam has criticised the scheme for providing a mere 20 per cent of irrigated land to smallholders. It also maintains that the 3,000 people resettled during the construction of the irrigation system will only get part of their land back when they return. “Poorer groups of the population are usually among the losers in ‘mega-public-private partnerships’,” Wiggerthale told the meeting. “Businesses tend to co-operate more with organised, ‘marketable’ farmers, the ‘richest of the poor’. And the environmental hazards are above all a threat to the local population.”

Henn noted that the BMZ had allocated only a small share – around two per cent – of its food security budget to Global Partnerships, compared to around 20 per cent for civil society initiatives and programmes within its “One World – No Hunger” initiative. She also stressed the importance of clear and straightforward legal frameworks for partnerships as well as transparency and quality assurance mechanisms.