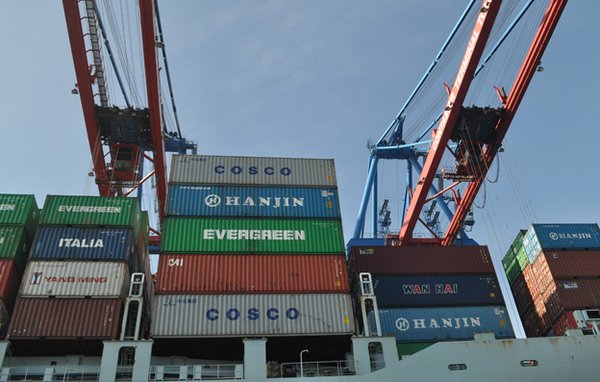 Container shipping accounts for 81 per cent of the world’s freight transportation and even 90 per cent of non-bulk cargo, amounting to 1.631 million tons in 2014. It would be difficult to establish a regime of comprehensive checks for biomass transports.
Photo: © S.Richter/Rural21

Can forests fit with free trade?

Scientists warn against the increasing threat that international trade in plant material is posing to forest health. They call for a stricter regulation of containerised trade of biomass.

Five years ago, at Montesclaros Monastery, in Northern Spain, more than 70 forestry pathologists representing 17 countries prepared a declaration drawing attention to the increasing threat that international trade in plant material was posing to forest health. The Montesclaros Declaration stresses an “unprecedented rise in numbers of alien pathogens and pests emerging in natural and planted forest ecosystems in all parts of the globe” and proposes “a phasing out of all trade in plants and plant products determined to be of high risk to forested ecosystems but low economic benefit”. The scientists highlight international trade in containerised ornamental plant seedlings but also recommend stricter regulation of trade in other plant materials such as wood packaging or wood chips.

The North American chestnut is a good example of what introducing species in a new environment can do. In the early twentieth century, imported Asiatic chestnut trees hosting a fungus that the North American trees had no resistance to caused the spread of chestnut blight, killing off three to four million North American chestnuts. The Kudzu, a Japanese vine species, has virtually smothered other vegetation in parts of south eastern USA. Forestry experts are particularly alarmed at the spread of the Sirex wood wasp and its fungus symbiont, originally natives of parts of Europe and Northern Hemisphere Asia. The female wasp introduces the fungus in pinewood to feed its young. Trees infested by the larvae and the fungus are killed off in a matter of months.

The Sirex wood wasp has already spread to parts of the Southern Hemisphere. It is having a devastating effect on commercially grown pinewood in South Africa, where forest pathologist Bernard Slippers and his colleagues at the Forestry and Agricultural Biotechnology Institute (FABI) at the University of Pretoria in South Africa are working out ways to check the spread of the wasp. Slippers notes that it has been introduced in South Africa several times, and with different types of fungus.
So far, attempts to check the spread of the wasp have met with little success, and it has already entered North America. Slippers maintains that the transportation of plant material plays a key role in spreading pathogens and other pests. For example, a tiny wasp first detected in Israel in 2000 that lays eggs on young eucalyptus tissue can cause the plant to develop galls that prevent it from growing beyond shrub size. These little insects now occur wherever eucalyptus grows, even though they are quite incapable of flying large distances.
Slippers is sceptical about quarantine regimes to check the spread of invasive pests and pathogens (IPPs), and claims that only one to five per cent of all containers can be realistically inspected. Container shipping accounts for 81 per cent of the world’s freight transportation and even 90 per cent of non-bulk cargo, amounting to 1.631 million tons in 2014. In 2012, the equivalent of 12.8 million twenty-foot-long containers was shipped throughout the world.

Measures taken after the 9/11 terrorist attacks in the USA indicate just how difficult it would be to establish a regime of comprehensive checks. In 2007, US Congress mandated the Department of Homeland Security (DHS) to scan and image all incoming seaboard containers before being loaded onto US-bound ships for radioactive substances and other material relevant to the terrorist threat. DHS was given until 2012 to implement a system. But the deadline was not met. Instead, the Department continued to rely on intelligence-gathering and analysts to identify “high-risk” incoming containers.

According to the Washington Post, less than half a per cent of the roughly ten million containers arriving at US ports were scanned before departure in 2011. The Congressional Budget Office states that the deadline for the DHS measures has since been extended three times and is now set at 2018. The DHS says the delay is also due to the huge costs involved in the scheme. But costs are not the only problem that comprehensive monitoring of biomass transports would face.

In 2015, a workshop was held in Sweden addressing the issue of reducing the risk of IPPs for forests. A paper covering the workshop, which was funded by Future Forests, a forest research programme initiated by the Swedish Foundation for Strategic Environmental Research, states that as far as Europe is concerned, reducing or managing the IPP threat depends on addressing the issue in international agreements, European legislation and national law.
However, it points out that the legal framework of the World Trade Organization (WTO) prevents the European Union from enacting legislation that could inhibit potential trade with other countries unless there is proven economic damage. WTO members are required to provide extensive documentation of the threat of invasive species based on scientific evidence in order to be able to strengthen legislation around importing live plants and wood products. This largely rules out precautionary steps to check for IPPs.

And EU membership itself prohibits stringent national laws that would inhibit the economy and trade of Member States, which rely on forestry in different ways and to varying degrees. Conflicting interests complicate legislation promoting plant health. Furthermore, decentralised responsibility for surveillance and monitoring systems has resulted in widely varying intensity and efficacy throughout the EU.

While all plants imported into the EU require certification stating that they are free from harmful organisms, only a small proportion of shipments can be subjected to inspection at ports of entry, and checks are aimed mainly at verifying whether they comply with regulations rather than at stopping potentially harmful organisms. Inspection intensity varies between EU Member Countries. Within the EU, cleared shipments can be moved freely. Quarantine blacklists do exist, but even if they are applied, they will not help if harmful organisms enter the EU that are unknown before they have taken root.

Various projects addressing invasive species and IPPs have been initiated. In view of the current system’s incapacity to control the increasing influx of harmful organisms as a result of globalisation of trade, The European Commission has responded to the increasing influx of harmful organisms resulting from the globalisation of trade and to the inadequacy of the present control regime with a proposal for a new regulation on protective measures against plant pests. Nevertheless, the Swedish workshop paper maintains that commitment to free trade and free movement of products and people within the EU will continue to inhibit the efficiency of the protections against IPPs. Prevention of invasions would need to concentrate on ‘safe’ commodities instead of marking certain commodities or origins as ‘unsafe’.

Measures would then address not only expected IPPs but also unexpected or even unknown invaders, requiring much greater restrictions on imports of plants and plant products as well as a stringent penalty regime for violations. This, the paper concludes, is hardly manageable under the current WTO system.
Some progress has been made in establishing international restrictions on the use of wood in containers, e.g. for pallets. But five years after the signing of the Montesclaros Declaration, efforts to reduce IPP threats still appear to be facing what the workshop in Sweden referred to as a “Catch 22  dilemma”.