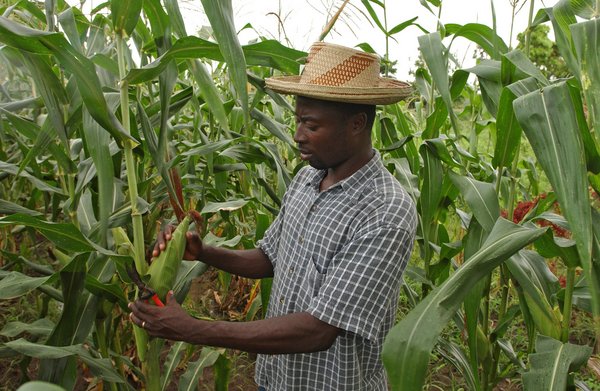 Maize is the most important staple crop in the world.
Photo: FAOALC

Is drought-resilient maize an answer to pressure on African farmers through climate change? The Center for Development Research (ZEF) organised a panel of experts to address this topic in Bonn, Germany.

Maize is an important staple food crop in most of sub-Saharan Africa, and it is grown on around 33 million of the total 194 million hectares under cultivation in the region. However, El Niño and global warming have had a dramatic effect on farming in many areas. The 2015-2016 El Niño event was one of the strongest on record. Among the countries affected in Africa was Ethiopia, which saw its worst drought in decades. The country, which is the continent’s fifth-largest maize producer, suffered huge crop losses, and an estimated 1.35 million farmers were left without new seed.

In West Africa, global warming is set to trigger shorter rainy seasons, more arid conditions, longer dry spells and more droughts. According to the International Institute of Tropical Agriculture (IITA), farmers in Northern Ghana consider drought and floods as the biggest challenges to their income and to food security. Together with the International Maize and Wheat Improvement Center (CIMMYT), IITA launched the “Drought-Tolerant Maize for Africa” (DTMA) project in 2006 that now operates in 13 countries in sub-Saharan Africa. Results and experiences from this programme, which ended in 2015 and also included genetically modified maize, were discussed at a ZEF meeting in May 2017.

Tahirou Abdulaye, an agricultural economist with IITA who is based in Ibadan, Nigeria, emphasised that DTMA builds on drought-resilient plants but seeks to spread drought-tolerant maize varieties (DTMVs). These plants can escape drought, but they also include intermediate- and late-maturing varieties that can cope with drought between seasons and during the flowering period. More than 200 varieties have been developed.

In 2015, Abdulaye participated in an IITA study among 2,305 farmer families in Nigeria 24 per cent of whom, it was established, had adopted DTMVs. “This is a good rate,” Abdulaye commented, “although adoption is probably lower in Ghana and Benin.” The study also found that the combination of access to seed had a huge impact on the adoption rate, with the rate rising to 90 per cent where access was good and farmers’ families were sufficiently informed about the advantages of the new plants.

Referring to problems the project was faced with, Abdulaye maintained that the effectiveness of extension systems was declining in Africa. “We were pushing the new technology for ten years,” he told the meeting. “And yet there were still communities that hadn’t heard of it.” Another disadvantage Abdulaye mentioned was the issue of recycling. There was no hybrid seed to sell.

The social and cultural implications of seed and planting material were also addressed by David Millar, Vice-Chancellor of the Millar Institute for Transdisciplinary and Development Studies in Bologatanga, Ghana. Millar stressed that the new seeds always put new demands on farmers, and that a farmer always had to look at the entirety of uses they would be good for.

“Farmers usually keep their seeds, although they may also procure additional seed from other farmers,” Millar said. “Surrendering that culture to other institutions is a delicate issue. Some seed has to be kept. The situation is too insecure to rely on external seed supply.”

Ernst Mill, Team Leader of the “Adaptation of Agro Eco Systems to Climate Change” (AAESCC) programme, run by Deutsche Gesellschaft für Internationale Zusammenarbeit in Ghana, promoted technologies in the country’s extension systems for more than four years. Mill noted that meagre rainfall was to blame for 50-60 per cent of losses in cereals production. He had worked together with the Ministry of Agriculture as well as the Savannah Agricultural Research Institute (SARI) on ways to reduce the impact of climate change. In addition to promoting some new maize varieties, measures included improving soil fertility by using farmyard manure.

Across the entire sub-Saharan region, maize production averages at 1.8 tonnes per hectare, which is far below the crop’s genetic potential. A SARI field study in Ghana established that harvest results varied heavily from year to year. Pooled across three-years, the Wandata variety, which proved to be most popular, yielded an average of 2.4 tonnes per hectare, although 2.7 tonnes were harvested in some areas.

A maize variety already released in the 1990s proved unsatisfactory because its vegetation period was too long, making it more vulnerable to weather impacts. “Very old varieties have become extremely rare,” Mill told the meeting. “Therefore, acceptance of the new varieties was not a problem. However, the plants could not reach their full potential because of the poor quality of the soil.” He also referred to a number of constraints that the farmers in the project area faced, such as a lack of tractors and labour or storage facilities, which would have enabled them to score a better price for the maize.

The meeting concluded that there was indeed a need for the new maize varieties in the areas affected by extreme weather conditions. However, it also became clear that their impact should not be overestimated.