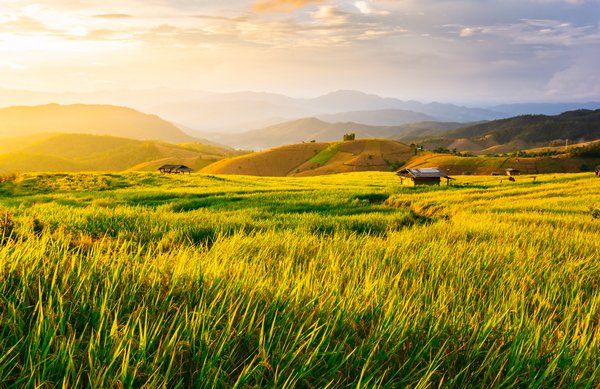 To achieve higher crop yields in rice a balance between nitrogen (N) and phosphorus (P) is decisive.
Photo: Shutterstock

Balance of phosphorus and nitrogen determines growth and yield in rice

A team of Chinese and German researchers reveals a mechanism by which nitrate in the soil activates both phosphate and nitrate utilisation in rice.

In the future, a newly discovered mechanism in plant growth could help to achieve higher harvests in a sustainable way. Scientists from Beijing (China) discovered this mechanism in their research on Asian rice in collaboration with Professor Dr Stanislav Kopriva from the University of Cologne’s Botanical Institute and the Cluster of Excellence CEPLAS, Germany. The balance between nitrogen (N) and phosphorus (P) is decisive for crop yield. Both nutrients, which the plant absorbs from the soil through its roots, interact more strongly with each other than previously known.

Kopriva explains: "For healthy and optimal growth, all living beings need a good balance of minerals. However, unlike in the case of humans, we know very little about how plants achieve this balance." Kopriva’s colleagues in Beijing had observed that the addition of phosphate only had a positive effect on plant growth and yield if a sufficient amount of nitrogen was also available in the soil. "Together, we have now discovered the mechanism by which nitrogen controls the absorption of phosphate", Kopriva remarked.

A detailed analysis at the molecular level revealed an entire signalling chain that the plant sets in motion – from the sensor that recognises nitrate quantities to factors that enable the synthesis of the so-called transporters that carry the phosphate into the plant. Kopriva explains: "Although most of the components were already known individually, it was only through this work that they were brought together into a signalling pathway. This gives us a completely new understanding of how to control plant nutrition. In addition, it enables specific manipulations to either couple the uptake of both nutrients more closely or to separate them from each other – depending on how nutrient-rich the soil on which the rice grows is."

Professor Kopriva from the Botanical Institute of the University of Cologne is co-speaker of the Cluster of Excellence on Plant Sciences CEPLAS at the Universities of Düsseldorf and Cologne in Germany, which is funded by the Excellence Strategy of the German Federal Government and the Laender.