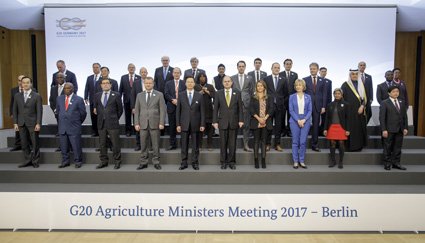 In Berlin, the G20 agriculture ministers agreed on an action plan on the sustainable use of water.
Photo: BMEL/photothek.net/Thomas Imo

Agriculture – the foundation for global peace

At their meeting in Berlin/Germany in late January 2017, the G20 agriculture ministers agreed on an action plan on the sustainable use of water resources. Germany’s Federal Minister of Agriculture Christian Schmidt stressed how important agriculture is for peace.

On the 22nd January 2017, the G20 ministers of agriculture got together in Berlin, Germany. Their meeting marked the start of Germany’s G20 Presidency. In Berlin, Germany’s Federal Minister of Agriculture Christian Schmidt underlined the fundamental importance of agriculture in mastering the global challenges of the future – from feeding the world’s growing population to protecting the global climate and addressing the causes of migration and displacement. Agriculture offers countries economic and social prospects and lays foundations for peace and stability. "That makes agriculture part of global security policy," he said.

In Berlin, the G20 agriculture ministers agreed on an action plan on the sustainable use of water. Since agriculture is the single largest user of water, and in future will continue to depend on the availability of sufficient clean water, it has a responsibility to use water economically and environmentally soundly. "We have underlined that with our joint declaration today," said Federal Agriculture Minister Christian Schmidt.

With a view to the world’s growing population, resources must be used more productively, more sustainably and more responsibly, the minister continued. The action plan lays out commitments that affect the realms of politics, technology, research and sharing knowledge, experience and lessons learned.

Digitisation offers major opportunities for using water sustainably, the ministers agreed. It enables productivity gains while making efficient and environmentally sound use of resources. Digitisation also bears a huge potential "for agriculture and world-wide food security", Schmidt stressed. He and his counterparts agreed to harness the full potential offered by digitisation. Rural areas must be provided with better digital services, and the needs of agriculture taken into account in this area.

The G20 ministers also agreed to produce a roadmap for ending the use of antibiotics in agriculture to promote growth. This would be an important international step towards reducing antimicrobial resistance, on the part of both livestock and human beings. It must be our common goal to "minimise the need for antibiotics in agriculture by ensuring suitable livestock and arable farming procedures", Schmidt said.