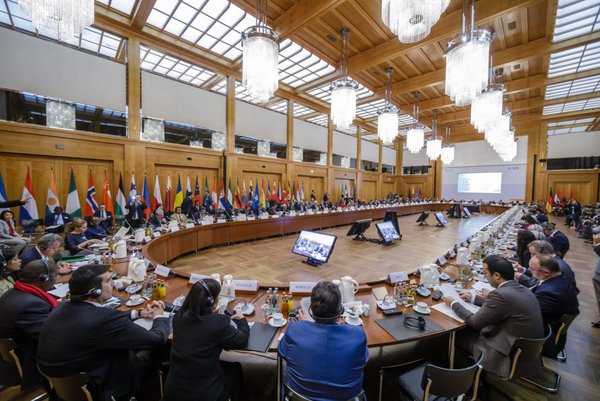 Agriculture Ministers’ Conference at the Global Forum for Food and Agriculture in Berlin, Germany.
Photo: © BMEL/photothek.net

Agriculture Ministers’ Conference 2019 – a call for an international Digital Council

At the Agriculture Ministers’ Conference in mid-January 2019, 74 ministers adopted a communiqué in which they call for establishing an international Digital Council.

International Digital Council – who should be involved?

With the communiqué, the ministers asked the FAO to draw up a concept for the establishment of an international Digital Council, in consultation with stakeholders including the World Bank, the African Development Bank (AfDB), the International Fund for Agricultural Development (IFAD), the Organisation for Economic Co-operation and Development (OECD), the World Trade Organization (WTO), the International Telecommunication Union (ITU), the World Organisation for Animal Health (OIE), and the Technical Centre for Agricultural and Rural Cooperation ACP-EU (CTA).

According to the communiqué, the ministers would like to encourage the FAO, with the involvement of other stakeholders, to draw up a technology impact assessment of the opportunities and risks presented by digitisation for agriculture and rural areas. Based on the outcome of the technology impact assessment, the ministers would like to invite the FAO to develop a common methodology to assess and track the digital development situation in the agricultural sector at national level.

“We have agreed that the FAO should develop a method in order to measure the degree of digitisation,” Germany’s Minister of Food and Agriculture Julia Klöckner stated. “We can then make international comparisons on what stage countries and regions have reached in respect of digitalisation, how they have developed and what political, social and economic steps are necessary. We need a digital diagnosis for each and every country. Who is at what stage, are the private-sector activities adequate, or is this sector hindering the bridging of the digital divide, or must the State intervene in a different manner? The aim is to drive digitisation and to overcome the digital divide.”

Bridging the GFFA 2018, which was dedicated to livestock to the GFFA 2019, the ministers agreed on establishing digital methods at the OIE in the framework of the renovation of its World Animal Health Information System (OIE-WAHIS). This shall form the base for exchanging information and for supporting veterinary services in designing their animal-disease control and eradication programmes. Furthermore, the OIE shall develop an animal data system that leverages the opportunities presented by digitisation for more efficient management of animal diseases.

The final communiqué by the 74 ministers and 13 international organisations was presented to José Graziano da Silva, Director-General of the FAO.