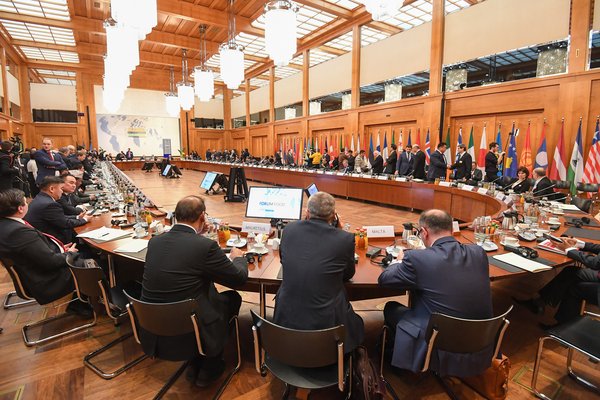 Agriculture and water – key to feeding the world

What part can agriculture play world-wide in the sustainable stewardship of water and in maintaining water quality? How can it be ensured that, despite increasing water scarcity, agriculture can provide the global population with food? These questions were among the issues addressed by this year’s Global Forum for Food and Agriculture (GFFA) in Berlin, Germany.

The sustainable use of water is one of the major global challenges of the 21st century. Factors such as economic development, population growth and urbanisation are intensifying competition for the scarce resource of water. Approximately 70 per cent of the freshwater used world-wide goes into irrigation. Estimates by the United Nations suggest that global demand for water in agriculture will increase by about 20 per cent by 2050. At the same time, fertiliser, herbicide and pesticide residues are having a negative impact on water quality. How can agriculture fulfil its role of providing a growing world population with food against this background? And what contribution can the sector make to a sustainable use of the valuable resource of water? These questions were at the centre of this year’s Global Forum for Food and Agriculture, which was held in Berlin/Germany in late January 2017.

“Access to water is a human right!” the Director General of the United Nations Food and Agriculture Organization (FAO), José Graziano da Silva, reminded the FAO High Level Panel. However, this right is still far from having been enforced everywhere. Millions of farmers suffer from a lack of access to water.  At a current 1.2 billion people, just under a fifth of the world’s population are already living in regions with a considerable scarcity of water; by 2025, according to United Nations environmental reports, this figure will have risen to 1.8 billion. At the same time, immense amounts of water are being wasted. For example, a third of the food produced for human consumption goes lost because it either ends up in the rubbish bin, as is usually the case in the industrialised countries, or because the prerequisites for correct harvesting, storage, transportation or processing are lacking, which is the case in many developing countries. “The water wasted because of this corresponds to three times the amount of water Lake Geneva has,” the FAO Director General remarked, illustrating the magnitude of the problem.

And then there is the aspect of climate change, the impact of which is additionally worsening cultivation conditions in many regions of the world. “Both in the east and the south of Africa, it is leading to the rises in production of the last few years being nullified,” stated Tumusiime Rhoda Peace, the African Union’s Commissioner for Rural Economy and Agriculture. Investing in research had to be right at the top of the agenda, for example in order to develop appropriate seed. In addition, solutions had to be found to the increasing conflicts over access to water on the continent. Peace referred to the Nile as an example. Its catchment area accommodates almost a quarter of Africa’s population, and it represents the region’s most important source of freshwater. Cross-border co-operation and negotiating processes were needed in order to guarantee the sustainable use of the scarce resource of water.

“There have always been changes in the weather,” said Johannes Cullmann of the World Meteorological Organization. “But we are much more vulnerable today.” Although agriculture was one of the chief causes of greenhouse gas emissions, it did also offer the greatest prospects for measures to adapt to climate change. However, around 70 countries across the world were unable to provide reliable climate and weather data. But such data was necessary not only to compile reliable forecasts but also to offer farmers advice on growing crops. “If we want to subscribe to the SDGs, we need robust data information,” Cullmann maintained.

But what are the options the sector has to cope with the growing scarcity of the resource? For decades, Israel, 60 per cent of whose agricultural areas are situated in arid and semiarid regions, has applied drip irrigation, which ensures maximum efficiency in water use. “In addition, we are stepping up wastewater treatment in order to provide water for agriculture,” Itzik Ben David of the Israeli Ministry of Agriculture explained. Furthermore, the government had developed a dynamic pricing system in which consumers bear the true costs of water consumption. Water supply to agricultural enterprises is governed by a quota system, with the price of purified water one third lower than the regular water price.

While Sierra Leone has not suffered from drought so far, it does have a marked dry season. Therefore, water storage is a key measure to lengthen the vegetation period. “Most of our farmers still apply traditional methods, which we would also like to stick to,” said Minister of Agriculture Monty Jones. Attempts were nevertheless being made to disseminate modern technologies so that farmers could intensify production.

FAO Director General da Silva once again emphasised that payment for water was not an option for developing countries. “Economists believe that we can solve all problems with payment,” he said. “But that won’t work because it will only keep people out of consumption.” A clear legal framework and an appropriate institutional framework governing secure access to water was needed, as were measures to implement food losses and food waste.

The GFFA is traditionally accompanied by an international meeting of ministers of agriculture. The final communiqué identifies four central challenges: reducing the risks of water scarcity, curbing water pollution, managing surplus water and safeguarding adequate access of agriculture to water. The fundamentals worked out are to be incorporated into the G20 process.