Whether smallholders are viable enough to meet the mounting demands of buyers is highly debated.
Photo: Ursula Meissner / giz

Agricultural policies in the 2010’s: the contemporary agenda

Agricultural development has moved up the agenda. Today it has not only to reduce poverty and hunger, but also become environmentally sustainable and climate smart. Disputes over agricultural policies are highly visible, but consensus exists on fundamentals for growth. It is not just what to do that matters, but also how to do it. Increasingly, the search is not for optimal policy, but for ‘good fit’, or even ‘good-enough’ policy.

Ideas about agricultural development have changed in line with prevailing circumstances and ideas. In the 1950s industry was expected to lead economic development, with agriculture playing a supporting role. By the mid-1960s, however, fears that food production could not keep pace with rapid population growth led to promotion of the ‘green revolution’ that spread high-yielding varieties of cereals. The technical tour-de-force was backed up by equally impressive public investments in irrigation, roads, warehouses, fertiliser production and distribution, directed credit, agricultural extension and guaranteed prices.

The green revolution led to much larger cereals harvests, but as the threat of food shortages receded, interest in agricultural development declined. The ‘Washington Consensus’ that came to dominate development thinking from the early 1980s onwards prioritised macro-economic stability and free markets, with little attention to the specifics of particular sectors such as agriculture.

Since 2000, however, there has been a growing sense that agriculture has been unduly neglected, especially in Africa. The focus on poverty and hunger in the Millennium Development Goals directed attention to the location of the poor and hungry: overwhelmingly in rural areas, most of them farming. Agriculture gained further attention when cereals prices spiked on world markets in 2007–08 to a degree not seen since 1973–74. A world that had grown accustomed to ever-cheaper staples on international markets – prices in real terms had declined by 60 per cent since the 1960s – was shocked.

With interest in agricultural development greater than it has been for decades, current circumstances differ from those of the past in four respects. One, the grip of the Washington Consensus on policy has weakened. Asian experiences of economic growth and development suggest the importance of policies tailored to country contexts, rather those that follow rigid prescriptions from the Consensus. The belief that liberalisation and macro-economic stability alone would stimulate agricultural growth has been shaken by the evidence that smallholders, above all in Africa, are using very few purchased inputs, even when more productive technology in the form of improved seeds and fertiliser are available.

Two, the environmental costs of agricultural development may no longer be bearable, while climate change threatens. Agriculture has been able to grow in the last half century while overdrawing on groundwater aquifers, polluting soils and water, and converting forests and other habitats rich in biodiversity to new fields. Water scarcity and the rising value of ecosystem services mean these options cannot continue: farming will have to become environmentally sustainable. Meanwhile, climates are seemingly ever less reliable and erratic; probably the first impacts of global warming. The search is on for effective ways that agriculture can adapt to changing and more variable climate, while reducing its own emissions of greenhouse gases.

Three, cheap oil may be coming to an end. Agriculture has been able to grow for half a century or more by using cheap fossil fuels and fertiliser derived from them. More expensive oil will push up costs of production.

Four, limited demand for agricultural produce may be changing to times of limited supply. The success of the green revolution meant that for most of the last thirty years, supply of agricultural produce has not been the limitation: effective demand has been the limit. Today, emerging economies in Asia, the Near East and Latin America, increasingly urbanised with growing incomes, are seeing relatively rapid increases in their demand for higher value foodstuffs, including vegetable oils, sugar, fruit, vegetables, fish, dairy and meat. Moreover, rising oil prices stimulate demand for biofuels. Farmers in the developing world thus have large and growing markets, often in their countries and regions, demanding additional produce and prepared to pay for it.

Agricultural development in the 2010s faces a triple challenge. The longstanding need remains: how to promote agricultural growth in ways that meet demand while reducing poverty and hunger. But there are also immediate concerns about volatility of prices for staple foods on international markets and rising demand for biofuels. In the (slightly) longer term agriculture has to become both environmentally sustainable as well as compatible with climate change. It is a challenging agenda.

Consensus on fundamentals for agricultural growth

Contemporary considerations on agricultural development include lively and eye-catching debates over issues such as the prospects for small-scale farms, land rights and the use of transgenic varieties (GMOs). But these should not obscure considerable agreement on fundamental conditions for agricultural growth – and indeed, growth that is broad-based, based on learning from five decades or more of experience. Two necessary, if not sufficient, conditions for agricultural development stand out. One is an enabling rural investment climate: consisting of peace and order; macro-economic stability with inflation contained and a competitive exchange rate; and basic institutions such as property rights respected. Although this may sound a counsel of perfection, the investment climate does not have to be perfect. Experiences from countries as diverse as China and Ghana indicate that reforms to correct the worst failings in the investment climate can provide a powerful stimulus to agricultural growth.

The second condition is that governments need to supply rural public goods: including physical infrastructure – rural roads, electricity, etc.; investments in people – education, water and sanitation, health; and agricultural research and extension. Returns to these investments in Asia have been high. These, however, will only be funded adequately if resources are not squandered on costly subsidies and transfers that are politically tempting since they are so visible to voters. 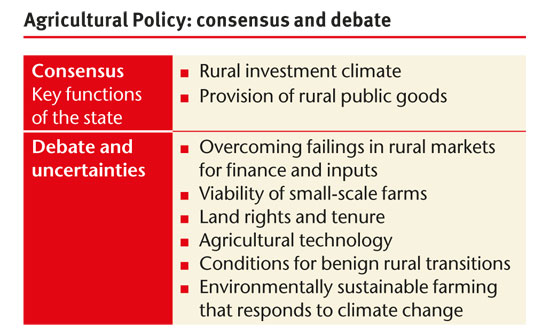 Much of the rest of agricultural policy, however, is subject to debate and uncertainties. One of the more important concerns is the lack of smallholder engagement with rural markets, above all for finance, insurance and external inputs such as seed and fertiliser, that has undermined the expected benefits of economic liberalisation. Shortage of information is often the problem: for bankers knowing the character and competence of so many small-scale farmers, for farmers knowing the characteristics of seeds, fertiliser and other inputs.

The policy implications are, however, in debate. For some, the solution lies in replacing private provision through markets with government provision of inputs, finance and marketing services directly to farmers. Asian governments usually did this during the green revolution; as did many in Africa up until the 1980s and 1990s by which time costs proved too high, so that many marketing boards were cut back or closed down. Contemporary examples of public intervention include the resurgence of fertiliser subsidies, with the apparent success of the targeted fertiliser subsidy in producing bumper harvests in Malawi a prominent case.

The alternative approach to remedying market failures is to look for innovative relations between smallholders and buyers or processors. Contracting is one possible response, with processors supplying farmers with the inputs they need on credit, although to date contracts are only common for crops that require processing in plants that have little alternative use. Farmer associations may help reduce the costs of transacting with numerous smallholders, although care is needed to avoid the pitfalls of farmer co-operatives – excessively wide membership, too many objectives, weak management, politicisation, etc. – that led to failures in the past.

Debates continue over the viability of small-scale farms. While they have advantages in labour management over larger farms so that economies of scale may not apply beyond the family farm, smallholdings may be at a disadvantage when facing the mounting demands from buyers – increasingly supermarkets and exporters – for quality, consistency, timeliness, volume and certification of conditions of production. That could lead to smallholders being excluded from the markets for higher value produce.

Land rights and tenure are another concern. Does longstanding collective tenure give farmers sufficient security to invest in their land and to conserve it? Or are formal registration of rights, surveying and demarcation under freehold tenure necessary? This debate has been stimulated since 2008 as sovereign states and large corporations have looked to acquire land for large-scale farming in parts of Africa. Voluntary codes of conduct may help protect the rights of vulnerable people who lack formal land titles, but stronger action may be needed.

Passionate debates arise over agricultural technology. How desirable and feasible are technologies that use industrial inputs intensively, as the green revolution did, compared to the alternative of using fewer external inputs and depending more on agro-ecological techniques? Above all, what is the balance of opportunity and risk from transgenic varieties? Questions of corporate power, environmental hazards, scale of farming and the rights of smallholders are entangled in these discussions, making them especially difficult to resolve. Whatever their outcome, a broad range of technical options is likely to be needed in a future world of changing and more uncertain climate.
Other important issues where answers are uncertain include how to ensure that the transition from agrarian and rural to urban and industrial societies is benign, without smallholders being displaced wholesale from their land without better jobs to take up. Much will depend on how many decent jobs the rural non-farm economy can generate, and how urban-rural links develop.

Last but not least are the environmental questions of how to make agriculture sustainable as well adapted to a changing climate while reducing net greenhouse gas emissions. A radical shift towards a mosaic of sustainable agricultural systems may be needed, with improved localised resilience based on managing both farming and landscapes more closely in line with ecology.

The contemporary agenda is not just one of what to do, but also of how to do it. It may be impossible to satisfy all the range of objectives for agricultural development – economic growth, reduction of poverty and hunger, social, gender and regional equity and environmental sustainability – at once; especially given the fragmentation of public administration and political support. Sequences need to be discovered.

Moreover, policy-making for agriculture has often produced perverse outcomes, with over-production in OECD countries as governments lavish support on their farmers, while in low-income countries farmers have often been taxed heavily. If the answers to making better policy are neither clear nor straightforward, it is clear that politics matter. Attempts to devise optimal policies for agriculture that ignore political calculations are unlikely to succeed. In practice, the search has moved increasingly away from looking for ‘best practice’ towards an interest in ‘best fit’ and, more radically, towards ‘good enough’ conditions. This implies identifying those conditions necessary for progress, even if they are not sufficient in themselves; then understanding how they can be created, even if in forms that may be imperfect.

If this all sounds rather difficult, we should take encouragement from several countries across Asia, where solutions have been found in a variety of circumstances, leading to agricultural development that has allowed both growth and transformation of their economies.