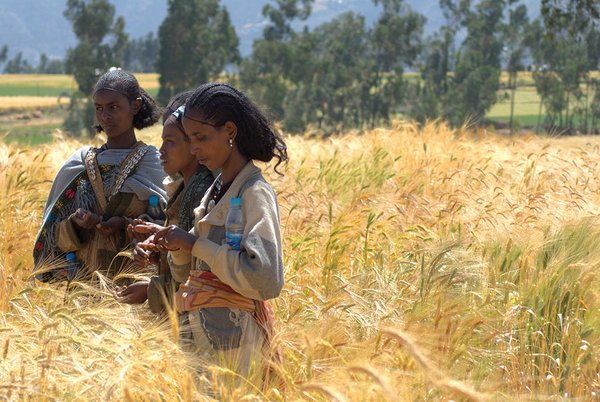 In a world of rapidly changing conditions, enhancing the adaptability and hence the resilience of family farms is crucial to their viability. Here, diversity plays an important role, as the following article demonstrates.

Farmers world-wide are now dealing with extreme weather, new threats of pests and diseases, changes in land management and a growing and hungry population. Can we find solutions which not only ensure that farmers can cope with our new reality but also allow farmers and communities to continue to develop? These are core questions that scientists – including at Bioversity International – are exploring with urgency.

According to the Stockholm Resilience Centre, resilience is the capacity of a system, be it an individual, a forest, a city or an economy, to deal with change and continue to develop. Here, agricultural biodiversity has a vital role to play, for it is helping farmers to bounce back from shocks and hardship. Smallholder farmers have relied on the evolutionary service of biodiversity for hundreds of years – in other words, on allowing crops to evolve and adapt to changing environmental conditions, and diversifying them to reduce vulnerability.

The majority of the world’s food insecure population live in rural areas in developing countries, and many are subsistence producers who may not grow enough to meet their families’ needs. Smallholder farmers often lack the institutions and structures to manage their natural resource base, which is increasingly degraded and – given that most of these crops are also grown in rain-fed conditions – particularly vulnerable to external shocks, including those induced by climate change.

Managing diversity, of systems, crops, varieties and trees, can provide options and increase the resilience of households and communities to produce even in times of stress. First, agricultural biodiversity is connected to nutrition and food security. Second, it can help farmers manage risks from new pests and diseases. Third, it can lessen the effects of sudden natural disasters. Fourth, diversity allows natural adaptation to the environment – vital in the face of climate change. Fifth, diversity reduces the risk of crop loss and contributes to productive, healthy farms. Research is showing that the use and conservation of agricultural biodiversity is critical to resilient farms and landscapes and to helping farmers to recover more quickly from hardship.

Today, only a few crops make up the basis of the world’s food supply. Out of more than 7,000 varieties of food crops in the world, we rely on only three – rice, wheat and maize – to supply over half of our plant-derived calories.  And, within those crops, we rely on only a few varieties. Together, only twelve crops and five animal species account for 75 per cent of global calories. This is especially true in developing countries, where people obtain up to 80 per cent of their energy from staple grains and have less access to nutrient-rich sources of food.

This has not happened by chance; it happened by design. For years, we thought if we only produced more calories, we could reduce hunger. So, we invested in new varieties of rice, wheat and maize that would increase yields. However, reducing hunger is more complex than simply producing more food. In this context, Bioversity International is co-ordinating the Biodiversity for Food and Nutrition initiative, with rich case studies of work under way. One example is the Soils, Food and Health and Communities project in northern Malawi. In this project, engaged smallholder farmers from Ekwendeni village selected and tested mixtures of diverse legume species for growing with maize using the ‘doubled-up’ legume technology promoted by the project. Project results show that intercropping maize with legume mixes has resulted in improved nutrition for children in communities where the project is being implemented. Also, farmers and community members have become change agents, adopting the practices informed by their own research findings. Over 9,000 Malawian farmers have adopted this technology to date. Through this project, communities are better able to cope with hardships, including increasing population, severe land degradation causing drops in crop yields, food insecurity and malnutrition. This is resilience at work through biodiversity.

Management of pests and diseases

Outbreaks from pests and diseases that attack farms and gardens cause a significant amount of crop loss. Research shows that diversity acts as insurance against damage from these pests and diseases. A greater number of varieties leads to a reduction in disease severity, which ultimately translates into less crop loss/higher yields. Diverse farms are more resilient to pest and disease outbreaks because they lower the risk of complete devastation.

Bioversity International and our partners have been working with farmers world-wide to plant different varieties of the same crops next to each other in their fields, to see which combinations provide the most effective control against which pests and diseases. Initial results from around the world indicate change. For example, Ugandan farmers have seen the presence of weevils that attack banana plants reduced by 75 per cent when planting different varieties together. In addition, smallholder farmers in Ecuador who planted diverse common bean varieties harvested their crop in spite of a heat wave due to the drought/heat resistance of varieties, while those who invested in one commercial variety only lost everything.

Biodiversity also provides a formidable barrier against natural disasters, a type of “farmland security”. In coastal communities, for example, a combination of mangroves, coral, trees, and control of soil/sand erosion are some of the tools that help lessen the damage during natural disasters, while of course providing ecosystem services to wildlife and people as well. The call for the restoration and enhancement of coastal protected areas following Hurricane Katrina and the 2004 Tsunami also highlighted this important role of diversity as “natural defenses”. Without these defenses, coastal communities are more vulnerable to hardship as our weather becomes more extreme.

The same logic applies to farms. There is a relationship between more diverse land use and less damage caused by landslides, for example. A survey conducted in Central American hillsides after Hurricane Mitch showed that farmers using diversification practices such as cover crops, intercropping and agroforestry suffered less damage than their conventional monoculture neighbours. These farms had 20 to 40 per cent more topsoil, greater soil moisture and less erosion and experienced lower economic losses than their conventional neighbours (Holt Giménez 2000).

In another example, 40 days after Hurricane Ike hit Cuba in 2008, researchers conducted a farm survey in the Provinces of Holguin and Las Tunas and found that diversified farms exhibited losses of 50 per cent compared to 90 or 100 per cent in neighbouring monocultures. Likewise, agroecologically managed farms showed a faster productive recovery (80 – 90 per cent 40 days after the hurricane) than monoculture farms (Rosset et al. 2011). This ability to recuperate and suffer less damage in the face of natural disasters demonstrates how diversity can increase the resilience of agricultural landscapes (or agriculture at the landscape level).

The latest report from the Intergovernmental Panel on Climate Change reinforces that climate change will affect everyone – and is happening now. In addition to poverty and hunger, we are dealing with a triple threat of extreme weather.

The use of agricultural biodiversity is a powerful tool for adapting to climate change and reducing climate risk. Bioversity International’s Seeds for Needs initiative is part of the CGIAR Research Program on Climate Change, Agriculture and Food Security. We are working with farmers in India, Papua New Guinea, Kenya, Tanzania, Ethiopia and Honduras to identify crop varieties that are better suited to existing or projected conditions, providing farmers with seeds to test in their own fields, and then working to strengthen local seed systems so that farmers always have access to the seeds that fit their changing needs. Seeds for Needs uses modern Geographic Information Systems (GIS) technology to identify gene bank accessions that have the higher potential to be adapted to current and future climatic conditions. The selected accessions are tested in the field to better characterise them under the present conditions. Men and women farmers were asked to evaluate the accessions to select those which better meet their needs. Bioversity researchers developed a mechanism based on community genebanks to ensure availability of the preferred accessions to farmers, and raised awareness among local farmers and decision-makers of the risks posed by climate change, sharing information about how the use of better-adapted varieties can support vulnerable farmers to protect livelihoods and ensure food security. Access to diversity and better knowledge of varieties empowers farmers to choose what is most suitable for their fields, and gives them options to be more resilient to erratic weather and shifting climatic patterns.

Biodiversity lessens vulnerability to loss and helps manage risks, and it also contributes to productive, healthy farming systems. Bioversity International researchers and partners have developed and tested a set of indicators to determine the resilience of agricultural landscapes. Their research found that Nepal’s Rupa and Begnas landscapes had high capacity to absorb stresses due to diverse production systems and strong social organisation. Reforestation and sustainable management of forest resources, for example, play a strong role in ensuring the delivery of important ecosystem services, such as soil erosion control, food and firewood. Diverse land use and livelihoods has allowed community members to spread risk and adapt to changing times and climate. Strong collective action and knowledge exchange in the communities has led to more sustainable farming practices throughout the landscape; and strong seed networks have allowed farmers to have access to a wide range of agricultural diversity. Much of the adaptive capacity of the Begnas landscape can also be attributed to strong local institutions and NGOs such as LI-BIRD that have supported community-based biodiversity management over time. These strategies need to be developed to strengthen resilience through the sustainable use of agricultural biodiversity.

Biodiversity for a resilient future

The challenge ahead of us is complex. Across the world, 842 million people are currently food insecure, a number that is set to rise as weather variability induced by climate change takes its toll. Meanwhile, we must also boost food availability by 60 per cent by 2050 to feed nine billion mouths, both nutritiously and without further encroaching on our natural resource base. Bioversity International’s refreshed strategy aims to ensure that agricultural biodiversity contributes to four strategic objectives:

We know that biodiversity is linked to all of these issues and that the same biodiverse principles can be helpful throughout the world. Biodiversity is a tool for sustainability and resilience, and research can bring us the much-needed answers.

Bioversity International is a global research-for-development organisation that investigates the conservation and use of agricultural and forest biodiversity “for improved nutrition, livelihoods, sustainability, and productive and resilient ecosystems”. It is a member of the CGIAR (Consultative Group on International Agricultural Research) Consortium.
➤  www.bioversityinternational.org