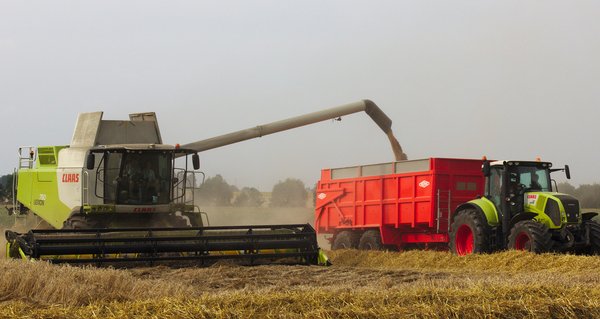 Mergers are being entered at all levels of the agrifood value chain.
Photo: Janiss/flickr.com

Agribusiness market power on the rise

Ever fewer corporations are gaining a constantly increasing share of global food production. This could jeopardise the Sustainable Development Goals adopted in 2015, non-governmental organisations warn and call for stricter regulations in the agricultural and food sector.

The market power of major corporations operating in the area of food production is continuously increasing. The reason for this is that mergers are being entered at all levels of the value chain – from the manufacturing of farming machinery through seed and fertiliser production to the food industry and trade. In the last two years alone, five of the twelve most capital-intensive takeovers of listed corporations occurred in the agriculture and food sector. This is referred to in “Konzernatlas 2017”, a publication presented by the Heinrich Böll Foundation together with the Rosa Luxemburg Foundation and the NGOs Oxfam, BUND and Germanwatch in Berlin, Germany, in January 2017.

Examples include the corporations Deere & Company (USA), CNH (Niederlande) and AGCO (USA), which hold more than 50 per cent of the world market for agricultural engineering products. Seventy per cent of trade in agricultural commodities such as wheat, maize and soy, sugar, palm oil and rice is in the hands of four mega- businesses: the US companies Archer Daniels Midland (ADM), Bunge and Cargill, and the Dutch enterprise Louis Dreyfus. This conglomerate is also referred to by the acronym “ABCD”. And once the mergers announced only recently in the seed and pesticide sector are all signed and sealed, with the US companies Dupont and Chemical joining forces, Chem China taking over Sygenta and Bayer buying up Monsanto, these three corporations will be controlling 60 per cent of the market.

Smallholders and consumers are losing out

The authors of the survey are critical of these developments for a number of reasons. The corporations could take advantage of their market power and, for example, force their suppliers to accept their prices. Then, they maintain, there is the danger of their influencing legislation via clever lobbying, e.g. with regard to the European Union’s regulatory system for the approval of pesticides or the authorisation of genetically modified organisms. In addition to the consumers, the losers will above all be the smallholders, who increasingly depend on corporate decisions, says Barbara Unmüßig, member of the Heinrich Böll Foundation Board. Unmüßig also criticises the trend towards digitisation in agriculture in connection with precision farming. “The major corporations – for instance in the agricultural engineering and pesticide sectors – are co-operating in order to digitally optimise production processes,” Unmüßig explains, stating that ostensibly, this is aimed at saving money and conserving resources and the climate. But she points out that only large farms can afford this technology, and that small and medium-sized enterprises will fall by the wayside. “Nowadays, the slogan is no longer ‘grow or perish’ but ‘digitise or perish’,” says Unmüßig, adding that precision farming is associated with moncultures, the heavy use of fertilisers and pesticides and the promotion of genetic engineering.

Marita Wiggerthale, Policy Advisor on Food Security and Agricultural Issues at Oxfam Germany, criticised increased co-operation between the German development ministry and food corporations in its food security projects. Instead of promoting local and regional markets, this was consolidating the market power of international corporations. “Such collaboration does not adequately take obligations stipulated in the National Action Plan for the Implementation of Business and Human Rights into account,” Wiggerthalte said.

The Konzernatlas for downloading (in German only)