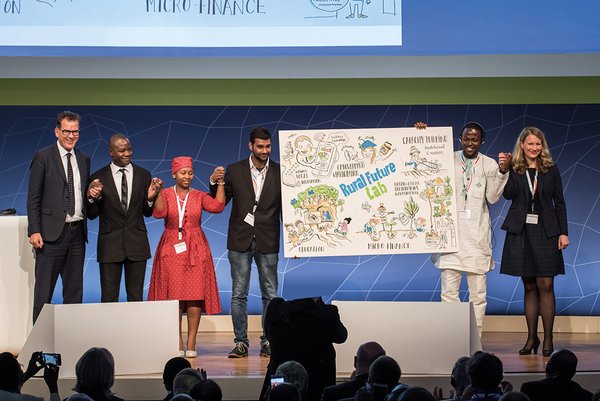 At the G20 Conference in Berlin, representatives of the Rural Future Lab presented Federal Minister Gerd Müller (left) the results of their deliberations and their demands for the future of rural regions.
Photo: Ralf Rühmeier

An SMS survey among 10,000 young Africans in rural regions confirms what has already been learnt from research and practice – and nevertheless contains a number of surprises.

There are many studies on young people in sub-Saharan Africa, also with regard to the situation in rural regions and the prospects for rural youth. However, to mark the year of the German G20 Presidency, the Federal Ministry for Economic Cooperation and Development (BMZ) decided not to talk about the young people in Africa but with them: at workshops, during a “Rural Future Lab” and at an International Conference on the Rural Future in Berlin in late April 2017 (also see articles "Creating the political momentum" and "We urgently require more public and private investments"). It seemed appropriate to complement the voices of the young experts heard there with a sound information and data base. In Africa, for every 100 inhabitants, there are an average of 81 mobile phone connections. Therefore, an SMS-based survey offered the opportunity to have quick access to a large number of young people living in rural areas not linked to the Internet (see Box). With this type of survey, the complexity of contents had to be reduced for technical reasons; the statements and insights gained are nevertheless noteworthy – and politically relevant.

The method the SMS interview was based on

A total of 10,000 young people between the ages of 18 and 35 years from the rural regions in 21 African countries were asked about their perceptions, wishes and values. They were selected on the basis of a random sample taken in each of the rural sub-regions in the countries chosen. The focus on the age group and the balancing of male and female participants in the survey were ensured by corresponding introductory questions. Anonymity was always assured. Neither the company conducting the survey nor GIZ, which commissioned it, had personal details or telephone numbers at their disposal that would have enabled backtracking the interviewees. Participation was voluntary, and a mobile phone air time was offered as an incentive. The survey was conducted in seven languages (English, French, Malagasy, Portuguese, Kinyarwanda, Kiswahili und Amharic) in February 2017. The consolidation of the data was completed in March 2017.

Agriculture is more attractive than assumed

Asked about the sector in which they would like to become occupied, the young people most frequently mentioned the option of working for the government (26 %). It is possible that the prospect of public administration appears to be attractive to many because it offers them precisely the economic security that most of them do not enjoy. Only ten per cent referred to manufacturing and craftsmanship, a value that is understandable given the very low rate of industrialisation in Africa. In contrast, the very high attractiveness of the agriculture and food sector is both noteworthy and surprising. At 23 per cent, almost a quarter of all young people would like to work there. This value contradicts the widespread expectation that the vast majority of young people no longer want to dedicate themselves to agriculture. Working in agriculture is completely out of the question for a mere three per cent of those who replied the survey. For young people, however, readiness to work in agriculture or in its upstream or downstream sectors very clearly depends on conditions. 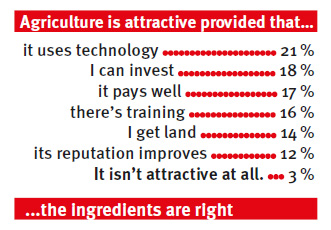 These include that it pays well (17 %) and offers options to apply technology (21 %) or to invest (18 %). Access to land is referred to by 14 per cent, while 16 per cent mention training programmes and vocational education as a condition. A further 12 per cent state that the sector’s reputation has to be improved (see also graph).

Summing up, it can be said that in Africa in the 21st century, young people still regard agriculture as hard work. However, its attractiveness and acceptance as a field of productive occupation requires an appropriate technological level, yield-enhancing investments in a legally secure framework, and that an acceptable level of income can be achieved. In a nutshell, these are conditions that have also crucially determined policies to steer rural transformation in Germany and Europe for decades.

A severe shortage of productive employment in rural regions

A mere 15 per cent of young Africans say that it is easy to find employment in their rural region. More than three quarters clearly state that it is not (see graph below). This graph illustrates the key challenge of rural transformation and, generally, economic development in many African countries. Each year, millions of people attain working age. According to a study by the Regional Strategic Analysis and Knowledge Support System (ReSAKSS), this figure will have reached 440 million by 2030. Scientists, UN organisations and development banks agree that without industrial development, productive employment is inconceivable for these people. 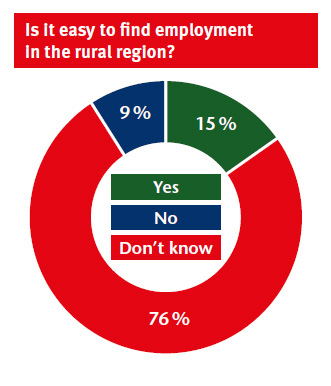 On the other hand, many African countries are having to foot a rising import bill for labour-intensively manufactured products: staple food, processed agricultural products, furniture, textiles and simple consumer goods. Africa is thus exporting the jobs that are so urgently needed both in rural regions and in the cities.

Alongside the construction industry, it is the agriculture and food sector that generates by far the highest and fastest employment effects, especially in the food, timber, leather and textiles industries. However, the share of African industry in the Gross Domestic Product has been stagnating or even declining for decades. But now academic knowledge and potent figures are penetrating the consciousness of political decision-makers in sub-Saharan Africa. According to the African Economic Outlook 2017, at least 26 African countries currently have a national strategy for industrial development in place. Gentle structural transformation of rural areas depends on coherent sector policies and infrastructure measures with impulses to the establishment of agriculture-based industries and services. 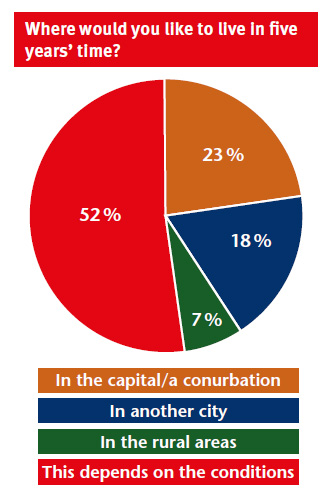 Asked where they would like to live in five years’ time (2022), a mere seven per cent answered without any reservations that they would like to stay in rural regions; 41 per cent were certain that they would be living in the city. A disturbing majority of 52 per cent replied: “That depends.” Asked about the most important improvements that would make the rural region more attractive, the young people gave particular importance to employment, education and technology, infrastructure, electricity, water and better support for agriculture.
More than 90 per cent say that new technologies and the Internet play a crucial role at work or in life in general. At the same time, 88 per cent emphasise that traditional values and family ties are important to them. And above all, 93 per cent expect their lives to be better or even much better in five years’ time. So despite all the problems and challenges, young people in rural Africa continue to maintain a strong positive attitude towards traditional values as well as to technological developments and the future in general. This optimism ought to be regarded as by far the biggest immaterial asset for a future in prosperity and peace.    ...

… Otherwise they will vote with their feet

According to the UN population statistics, 136 million people between 20 and 34 years of age are living in the rural regions of sub-Saharan Africa. If we apply the survey’s result of 41 per cent of the young wanting to live in urban settlements, this translates into 56 million who will be migrating to the cities in the coming years. Although no effective rural-urban migration can be derived from this, it is nevertheless a figure that has to be taken very seriously. The urban infrastructures and labour markets will hardly be able to absorb such a huge amount of young people in such a short space of time. Taking the 52 per cent “Undecided” into account as well, in absolute numbers, an additional 71 million young people would be surging into the urban areas. Without a job, and without any prospects for the future, they would further amplify the often already existing social, ethnic and political centrifugal forces in their countries. Peaceful and organised structural change is no longer conceivable in these conditions.
Political steering of rural transformation and the cushioning of its impacts are urgently required. This first of all calls for political leadership, ambitious investments in public infrastructure and the creation of reasonable economic policy framework conditions for private investment in rural areas as well as industrial policy support especially for the labour-intensive sector. This is first and foremost a national task for the countries of sub-Saharan Africa. Many governments have already started to address this issue and are formulating policy priorities. In addition, it will be a major political challenge for the international community over the next two decades to support these efforts. Otherwise the young people will vote with their feet.

Vivid urban-rural relations
Forty-five per cent of all interviewed young women and men stated that they were living in rural areas as well as in cities. This multi-locality indicates that rural transformation has progressed more strongly than we expected. Many young people from the rural areas are well informed about options to choose the locations for securing their livelihoods, even if this means dealing with the hardships in the cities, unlike some rural-affine observers have assumed in past years.