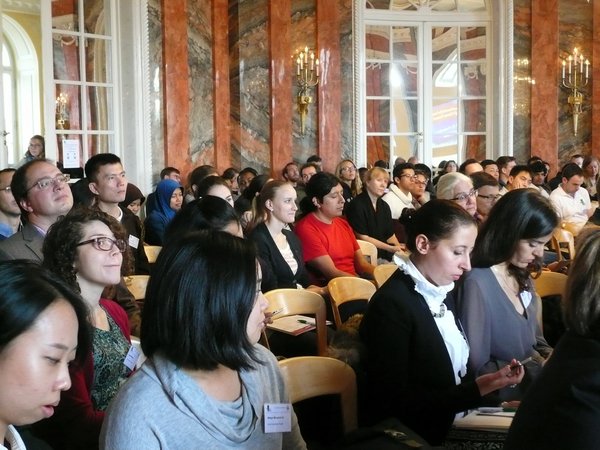 Adaptation alone is not enough

Often, weather forecasts do not reach the smallholders, so that they have no chance of responding to the impacts of climate change. However, adaptation to climate change alone is not enough. The participants in this year’s World Food Day Colloquium called for a transformation of the agriculture and food system in order to guarantee food security.

This year’s World Food Day Colloquium of the University of Hohenheim, in Southern Germany, was devoted to climate change. Participants first of all looked back to 1815, when the volcano Tambora in Indonesia erupted and, as a consequence, a mixture of dust and ash seeped into the ground and darkened the sky. The cloud of ash moved to Europe, resulting in a “year without a summer”. It was too cool and rained too much, and one of the greatest famines of all times hit the continent.

Forecasts do not augur well for the future, either. Extreme weather situations are set to become even more frequent. For example, experts are reckoning with a significant increase in droughts for the subtropical regions and more extreme precipitation events in the tropical regions. However, scientists are still not in a position to predict the occurrence of such individual extreme events with the conventional forecasting models. But this is not so important when it comes to the issue of food security, as Professor Volker Wulfmeyer of the University of Hohenheim stressed. Rather, what counts in his opinion is to put more emphasis on the prediction of seasons. “Seasonal forecasting within a couple of months can help us to figure out whether, for example, a drought period will appear,” Wulfmeyer maintains. “Then we will have the opportunity to get prepared. We can change agricultural practice, we can store water and food. In a nutshell, in this manner, we could resort to safety measures much more effectively than we can now.”

Regional forecast models are a help

However, forecasting has improved over the last few years since more factors are now fed into calculations. New ones include soil texture and moisture, land use decision and management or energy balance closure, just to name a few, as Dr Kirsten Warrach-Sagi of the University of Hohenheim explained. Such comprehensive integrated models consider interaction between agricultural landscapes and the atmosphere at regional level and thus, ultimately, also the impacts that certain farming practices are going to have on climate change. Such a model could help to assess how agricultural landscapes will adapt to climate change or how climate and land use change will affect the regional energy and water cycle. And last but not least, it can also be used to work out how farmers and agricultural markets might adapt to climate change.

The forecasts have to reach the farmers

Bruce Campbell also regards forecasts as an important aspect of adapting agriculture to climate change. Campbell is the director of the CGIAR Research Program on Climate Change, Agriculture and Food Security (CCAFS). In his opinion, the weather forecasts, especially the medium-term ones, are still not reaching those who really need them, i.e. the farmers. “The farmers must be able to understand what’s going to happen in the next season, so they can choose if they grow this kind of crop or that kind of crop. So we need the meteorological agencies to get these weather forecasts to farmers, which is a big challenge in Africa, for example, because not everybody is connected with cell phones or things like that. So we for example work with the community radio stations getting the broadcasters to deliver the messages to communities.”

In so-called climate smart villages, scientists of CCAFS are trying out how this could work regarding adaptation to climate change – for instance in Senegal. “We worked with women farmers and men farmers to understand what their needs are in terms of climate information,” Campbell explains. “We also looked at their traditional knowledge, how they forecast themselves, because if we come along and tell them something it is unlikely that they will just accept it. We have to try and understand traditional knowledge and blend it with scientific knowledge.” They also trained the broadcasters, and after three seasons they reached seven million farmers.

“We need a price change to secure food security”

However, as important as it may be, adaptation is not enough to limit global warming to a maximum of two degrees Celsius and thus also by and large ensure our food security. The scientists at the World Food Day Colloquium were in no doubt about this. In their opinion, the international climate agreements, the Kyoto Protocol and the Paris Agreement, are little more than toothless paper tigers since they do not provide any binding measures to attain the goals. In this respect, compared to the Kyoto Protocol, the Paris Agreement was on fact a retrograde step, according to the University of Hohenheim’s Professor Manfred Zeller, who demanded: “What we need is a complete and concrete structure of transformation of agriculture and food. What we need is a breakthrough in policy at a global level.”

The major share of greenhouse gas (GHG) emissions, i.e. 65 per cent, comes from fossil fuels. But the market price does not reflect the social or ecological costs of consumption. This was why politicians had to take action and find options to tax fossil fuels on a global level. This could be done at any point along the value chain. Of course, levying such a tax could be differentiated according to how much GHG the countries were emitting, Zeller explained. Consumers should also be expected to pay more. “We can only solve the climate change problem and secure food security through globally completely different pricing. But”, he continued, “we have to hurry up with this price change to alert nations and economic investors and consumers. It is absolutely feasible, I believe, and could also be a great source of funding for mitigating social impacts on the poor, for example, of the changes in price regime.”

Wulfmeyer emphatically clarified just how urgent this was. “We have to be CO2-free by 2050!” he stressed. “We need the decarbonisation of the economy in order to attain the 2-degree target. We have to convert our systems to regenerative energies as quickly as possible,” Wulfmeyer demanded.