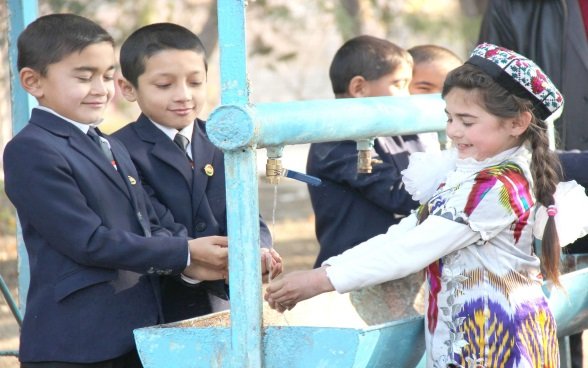 Access to drinking water and sanitation facilities is one of the main basic conditions for socio-economic development. While the percentage of people with access to clean water globally is growing, the opposite has been happening in Central Asia since the collapse of the Soviet Union.

Although Tajikistan is endowed with abundant water resources, people living in its rural and mountainous populations are facing serious difficulties in terms of public health. Eighty per cent of these inhabitants have no access to clean drinking water.

The civil war, which ended in 1997, had a major impact on eastern Tajikistan's population and its infrastructure, in particular the Eastern Khatlon region and the Gorno-Badakhshan Autonomous Oblast (GBAO), where the Swiss Development Cooperation (SDC) is focusing its activities on improving access to drinking water and sanitation.

An obstacle to development

Waterborne diseases such as typhoid and diarrhoea are spreading in eastern Tajikistan. Also, women and children invest a significant amount of time in fetching water, to the detriment of income-generating or educational activities. These problems are compounded by substantial population growth.

The state commits few resources to building new facilities. Sixty per cent of the existing infrastructure does not work, and there is no money for maintenance. Expanding and improving the infrastructure remains a financial and technical challenge for the future. The government's reform programme for 2016-2025 aims to decentralise the water sector and clarify the roles and responsibilities of the different actors involved.

Water user associations assume responsibility for day-to-day operations and maintenance at local level. The SDC's programme helps these actors gain the knowhow they need to make sure water supply systems function properly and are well maintained. It also promotes effective sanitation methods, which are key to preventing contamination of water sources and aquifers. This in turn helps maintain the public health benefits of access to clean drinking water.

The overall goal of the project is to improve the quality of life of 70,000 people in Eastern Khatlon and GBAO by implementing sustainable water management and sanitation mechanisms.

The project includes an equal representation of women and young people in managing and operating the infrastructure and enables them to address their specific needs. Another element is to disseminate good hygiene practices in order to reduce water-related health risks.