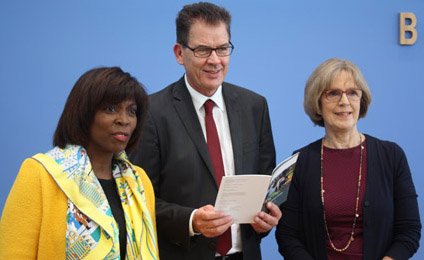 A world without hunger – impossible without peace

Hunger throughout the world could be eliminated by 2030, according to the participants of the conference “One World – No Hunger”. But not only are new trouble spots nullifying progress, they are also tying money and resources of entire regions. More than ever, this also makes combating hunger a security issue for humanity.

International experts met in Berlin for two days at the invitation of Germany’s Ministry for Economic Cooperation and Development (BMZ) to seek new approaches in achieving a world without hunger. At the conference which took place end of March 2015, the initiative “One World – No Hunger”, launched recently by the development ministry, was presented. It is intended to contribute to ending hunger in the world by 2030.

“Hunger is the world’s biggest solvable problem,” said German Minister of Development Gerd Müller, opening the conference. Already today, the world was producing enough food to feed eight to ten billion people. Nonetheless, 550 million people are suffering from hunger in Asia and 300 million in Africa. There is a lack of land ownership rights and support for women, who have to bear the brunt of providing food. Training, education and research is insufficient, and neither storage capacities nor logistics meet requirements to ensure that harvests reach households via the value chains. As a result, Müller pointed out, alone in India, half of the harvest was rotting. The BMZ intends to provide a total of at least 1.4 billion euro annually for the development of rural regions and combating hunger.

The insights in the causes and the extent of hunger are not new. But what is new is the “perennial crisis” of hunger being eclipsed by the growing number of trouble spots. Ertharin Cousin, Director General of the United Nations World Food Programme (WFP), explained the impact that this was having on its activities.
Last year, the WFP had 5.4 billion dollars at its disposal. However, the organisation could have done with 7.8 billion USD.

While the number of people in typical hunger situations had declined, the numbers of refugees were on the increase, and their situation was becoming more aggravated. Cousin told the meeting about a Syrian mother of seven who had been on the move for three months before finding a safe camp. Lebanon and Jordan, poor countries themselves, have to accommodate millions of people without any access to resources and without any supplies whatsoever. In addition, there are trouble spots like Nigeria, from the North of which tens of thousands of people are fleeing to the neighbouring countries of Cameroon or Chad, or South Sudan, which has again plunged into civil war following independence.

Without new money, the WFP food voucher programmes would come to an end in May, and the organisation could run out of cash before December 2015. Not only were crises devouring the “normal hunger programmes”, they were also overshadowing the goal of solving the problem of hunger by 2030.

This warning was reiterated by Bärbel Dieckmann, President of Deutsche Welthungerhilfe (DWHH). “In the long run, people are not going to accept living in insecurity,” Dieckmann said. There was the threat of young people without livelihoods joining radical movements for just a couple of hundred USD and destabilising entire regions, she explained, pointing to the civil war in Syria as an example that the world had still not found any answer to. Four years previously, nobody would have envisioned crises in Syria or Eastern Ukraine. Food prices were on the increase in Ukraine, and fewer and fewer people could afford them. Today, there were “conflagrations” throughout the world that could wipe out any progress made in combating hunger and poverty, Dieckmann said.

Nevertheless, there are several examples of poverty eradication actually working. This is the case where smallholder agriculture and small regional businesses are at the forefront. Describing the model for success, Dieckmann explained that such businesses were earning profits that remained in the country and were locally reinvested. Governments had to create the prerequisites to achieve this themselves, for in developing countries too, income discrepancies were increasing more and more. In order to create social security systems, the countries had to establish a tax system via which they could initiate a redistribution of wealth, Dieckmann maintained.

There had never been better times for investing in agriculture and rural regions, claimed Ousmane Badiane, Africa Director for the International Food Policy Research Institute (IFPRI), based in Washington DC, USA. Every investment would pay its way and ensure people’s income. For example, smallholders in Senegal have succeeded in increasing their exports of vegetables to the European Union threefold in just a few years thanks to a marketing association they formed – without having to enlarge their land under cultivation. Nevertheless, the future credo for agriculture is “modernisation”. Badiane said that everything that raised productivity at local level would offer people new livelihood prospects. This also applied to the controversial area of genetic engineering. Africa ought to engage more actively in the debate and present a standpoint of its own.

Political will and empowerment count

The focus should be on raising people’s income rather than on enhancing productivity, said Michael Windfuhr of the German Institute for Human Rights. “The emphasis has to be on how we can enable people to become more productive – so it is all about empowerment, and here, it is not large amounts of money that counts but the political will to invest,” Windfuhr maintained, and referred to the example of land. Insecure land ownership conditions are one of the reasons for smallholders failing to invest. However, according to Windfuhr, merely awarding land titles is not enough. This could result in the newly gained asset just being sold again.
Rather, infrastructure, education and training, consulting and supporting public investments are needed for the people to be able to manage the land. Moreover, Windfuhr stresses, new ways have to be sought to integrate vulnerable groups such as women who have so far had hardly any access to land, or pastoralists depending on common land. “We have to take care that investments do not simply bypass the people,” Windfuhr said at the meeting.

This is precisely what development organisations like the Inkota Network, VENRO, the umbrella organisation of development non-governmental organisations in Germany, and Oxfam fear. Although they welcome the German Federal Government’s initiative to combat hunger and malnutrition, they are critical of its approach, which, in close co-operation with the private sector, incorporates the setting up of 13 “Green Innovation Centres”.
They maintain that the concept is too technology-centred and bypasses smallholder interests. However, multi-stakeholder partnerships also play a key role in the Sustainable Development Goals, to be adopted by the international community of states in September. Ertharin Cousin also seeks to integrate private businesses in the global community of responsibility. According to Cousin, not every smallholder wishes to remain stuck in a subsistence economy; however, he does need fair access to resources that will help him develop his farm.