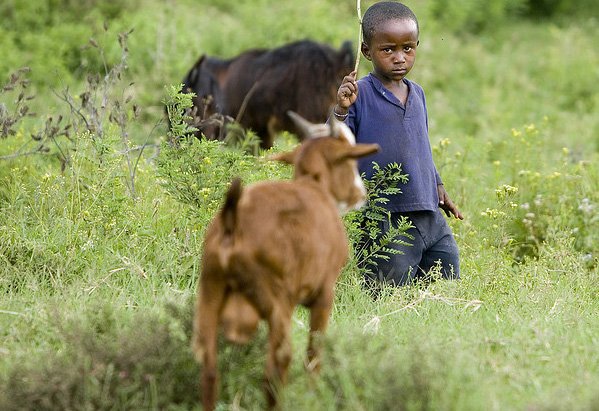 Demand for meat and milk from small ruminants in Africa and Asia is expected to rise.
Photo: © David Dennis

Countries pledge to wipe out peste des petits ruminants (PPR), also known as sheep and goat plague, globally by 2030. A plan to eradicate PPR was developed by FAO and OIE.

High-level authorities from 15 countries have pledged to collaborate on a global plan to wipe out forever the devastating animal disease known as ‘peste des petits ruminants' (PPR) by 2030, a lethal plague for goats and sheep and the scourge of rural households in vast swathes of the developing world. This was reported by the Food and Agriculture Organization of the United Nations (FAO) in April 2015.

Ministerial delegations, along with more than 300 participants from across the continents, representatives of regional bodies and international organizations agreed to a plan to control and eradicate PPR drawn up by FAO and the World Organisation for Animal Health (OIE). OIE and FAO agreed to establish a joint secretariat for the implementation to be hosted by FAO.

The campaign will make PPR only the second animal disease ever to be eradicated, after rinderpest in 2011. PPR is estimated to cause over USD 2 billion in losses each year, mostly in Africa, Asia and the Middle East, and its elimination will improve food and nutritional security for billions of consumers and especially the more than 300 million vulnerable households who keep sheep and goats in the affected regions.

Demand for meat and milk from small ruminants in Africa is expected to rise by 137 per cent from 2000 to 2030, and even more in Asia, according to FAO, and diseases cripple the efficiencies in satisfying these needs.
The plan developed by FAO and OIE is estimated to cost 4 to 7 billion USD over a 15-year period. Annual savings generated by eradication are expected to quickly pay back the investment required. FAO and OIE believe that this could be done in less time if they have the strong support from governments, partners and regional organisations.

The plan for eradication

The campaign calls on nations to adopt its four-stage approach, beginning with an assessment period expected to last between one and three years. The second stage, lasting two to five years, focuses on control and risk management, while the third is geared to final eradication and will take between two to five years. The final stage requires countries to document that there have been no cases of PPR for at least 24 months.

The first, diagnostic stage requires identifying the numbers and where the flocks are, where they are most at risk, and also endowing veterinary services with legislative approval and an enabling environment to intervene.
While voluntary vaccination is always encouraged, the strategy will require systematic vaccination in the second stage, focusing initially on areas where PPR incidence is greatest. In the third phase, vaccination is obligatory and considered a public rather than a private good.

The eradication campaign calls for immunising up to 80 per cent of all animals, an outcome that will require vaccination of almost all small ruminants that are more than three months old.
An inexpensive, safe and reliable vaccine complying with OIE standards on quality exists for PPR, and national and regional authorities encourage vaccine makers to achieve greater capacity while researchers seek ways to make thermostable versions of the vaccine able to withstand higher ambient temperatures.