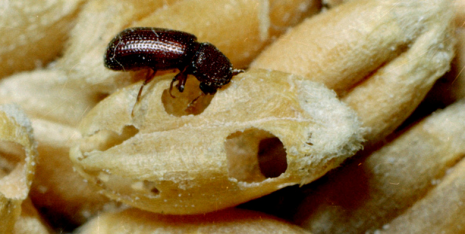 A lesser grain borer on a wheat kernel. A new kind of coating could protect seeds from these beetles and their larvae.
Photo: © Clemson University - USDA (Cooperative Extension Slide Series, Bugwood.org)

A peachy defence system for seeds

Scientists at ETH Zürich, Switzerland, are developing a new coating method to protect seeds from being eaten by insects. In doing so, they have drawn inspiration from the humble peach and a few of its peers.

Many crops are ill-protected against insect pests during storage. To protect stored cereal grains from herbivores, pesticides are often applied. While pesticides undoubtedly do have a functionality, increasing concerns are arising about their application.

In a recent study, scientists at ETH Zürich, Switzerland, investigated a bio-inspired cyanogenic grain coating with amygdalin as a cyanogenic precursor mimicking the feeding-triggered release of hydrogen cyanide (HCN) found for example in bitter almonds or in the kernels of peaches. The multilayer coating consisted of biodegradable polylactic acid with individual layers containing amygdalin or β-glucosidase which is capable of degrading amygdalin to HCN. This reaction occurred only when the layers were ruptured, e.g. by a herbivore attack, the scientists explain.

A possible replacement for pesticides

“We've demonstrated that this new kind of coating method works: the grains are protected from being eaten by insects and are usable in the field,” explain the study's authors Carlos Mora and Jonas Halter, and add that the treatment using this method is as straightforward as it is with spraying. Nor are the costs of the new method significantly higher than with insecticides.

The ETH researchers are convinced that this kind of seed coating can be used on other types of crops too. “The method has the potential to replace certain synthetic pesticides,” believes Carlos Mora. “Not only is the coating biodegradable, but it also ensures that the seeds retain their quality in storage.”

The study accompanying their work was recently published in the Journal of Agricultural and Food Chemistry.