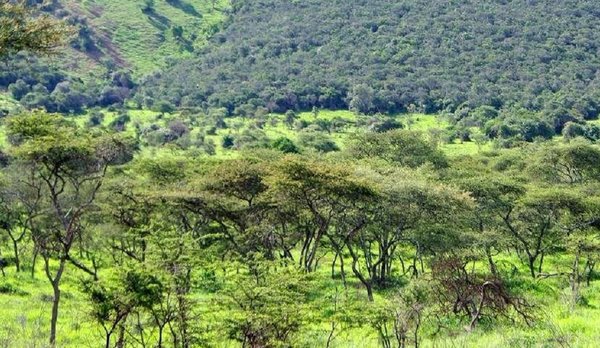 A massive effort to map the world’s plant biodiversity

Two major scientific publications have just revealed some surprising findings about the world’s plant biodiversity. The first refutes a widely accepted theory: the climate is not the only factor explaining biodiversity in tropical forests. The second study shows that on a local scale, the Amazon rainforest and the steppes of Eastern Europe can harbour an equivalent number of plant species.

Just a few weeks apart, Nature Ecology & Evolution and Nature Communications have published two world maps of tree and plant biodiversity, seen from different angles. Because of their scope and their unprecedented inventory efforts, these two complementary studies will serve as new references for future conservation policies.

Scientists at CIRAD, Montpellier/France, contributed to this research with its partners in Africa and the Amazon, providing data from inventory plots in tropical areas. The scientists also provided their expertise on the measurement of biodiversity and interpreted the original results obtained for the inter-tropical zone.

Tropical forests: their species richness does not depend on the climate alone

In this study led by the Global Forest Biodiversity Initiative, 249 scientists from more than 50 countries analysed the biodiversity of 55 million trees in 1.3 million plots throughout the world. Published last August in Nature Ecology & Evolution, the results cover 97 per cent of the world’s forests and provide an unprecedented level of detail to understand geographical variations in local tree biodiversity.

Local species richness, in other words the number of species co-occurring within one hectare, is a key measurement of biodiversity. Forests close to the equator have on average 98 different tree species. This figure gradually diminishes, stabilising at four species per hectare at 50 degrees north or south. According to the study, the most diversified tropical forests are found in the Amazon, sometimes with more than 200 tree species per hectare. The equivalent for temperate forests is situated in the forests of southern central Chile, with 50 species per hectare.

Beyond this inventory, the study details the drivers of the species richness observed. Although biodiversity models have so far focused on temperature and rainfall, this new research shows that there are other factors that explain the variability of biodiversity in tropical areas. The topography, the nature of the soil and, nowadays, the impact of human activities are all variables of co-limitation along with the climate.

Mapping plant biodiversity at all scales

It is essential to take account of the effect of the size of the zone observed when mapping the world’s biodiversity, according to this second study led by Martin Luther University Halle-Wittenberg and the German Centre for Integrative Biodiversity Research Halle-Jena-Leipzig, both in Germany. The authors of the study, published in September in Nature Communications, thus analysed 170 000 vegetation surveys from all of the different climate zones.

The vast majority of studies on global biodiversity are conducted at a large scale, for example a state or a region. However, by reducing the scale of the areas observed, the scientists discovered that some notable differences in the level of diversity between tropical zones and temperate zones tended to disappear. For example, at a very small scale, the steppes of Eastern Europe in Siberia and of some Alpine countries in Europe have a level of plant biodiversity comparable to the Amazon rainforest.

These findings question certain preconceived ideas, for example concerning the vegetation of West African ecosystems, which is considered to be low in biodiversity for a tropical zone. The study nevertheless shows that West African species are distributed across very large distances, and therefore do not necessarily appear in measurements from small sampling areas. To better understand West African biodiversity, the scientists thus underline the need to survey a large number of small plots.

These maps are a world first and are leading to recommendations for future conservation policies. First, in the tropics, public policies will need to take account of the multiplicity of co-limiting factors for biodiversity, including human activities. Next, in order to be effective, conservation policies will need to integrate variability in the spatial distribution of plant species.