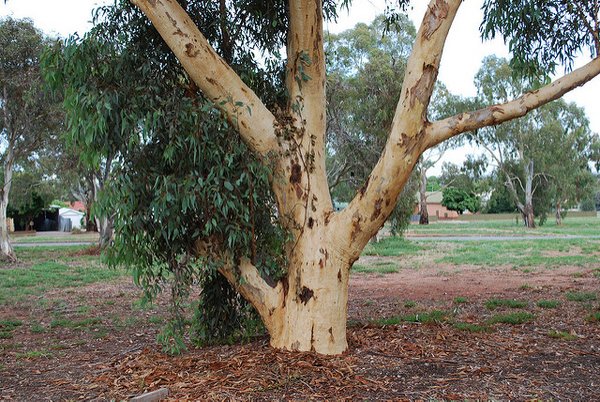 Eucalyptus plantings may be subject to catastrophic firestorms because of the highly combustible oils produced by the eucalyptus leaves.
Photo: © Sydney Oats (flickr)

A disaster waiting to happen

Portugal’s disastrous forest fires were aggravated by eucalyptus trees grown for the paper pulp industry, environmentalists claim. The fires broke out as new legislation on forest management was still in preparation.

Environmentalists say eucalyptus trees were at least partly to blame for the devastating forest fires caused by dry lightning in Portugal last June, which claimed the lives of 64 people. Only three months before the disaster, Portugal’s President Marcelo Rebelo de Sousa had announced stringent forest management measures, including a ban on new eucalyptus plantations. The country is Europe’s biggest exporter of eucalyptus pulp, and Altri, its largest eucalyptus pulp producers, threatened to stop investing in new pulp mills should the government go ahead with its plans, which, the warned, would result in thousands of job losses. The Portuguese Association of the Paper Industry (CELPA) referred to de Sousa’s proposals as “a huge loss for the Portuguese economy”. The new laws were still being debated when the monstrous fires started.

Above all a native of Australia, eucalyptus was first brought to Portugal in 1830. It now accounts for a quarter of the country’s forest cover, and is its commonest tree. Portugal was the first country to use eucalyptus wood to manufacture paper pulp, in 1957, the lead role being taken by a pulp mill belonging to the country’s Navigator Company. Eucalyptus plantations became more and more widespread in the second half of the twentieth century, and this was accompanied by a rapid growth of the Portuguese pulp and paper industry.

According to the Navigator Company, the fast-growing eucalyptus produces more fibre and more wood from the same quantity of water than other species, and it is highly efficient in using the water in dry areas. Its leaves contain cincol, a substance based on naphazoline nitrate, which is used in nose sprays. Cincol can kill off certain bacteria on contact, although the company stresses that eucalyptus trees “have no sterilising effect, but merely the potential to reduce biological and microbiological diversity to a marginal extent”. Another aspect it refers to is that the eucalyptus returns 80 per cent of the nutrients it needs to grow to the soil. But it makes no mention of the tree’s role in forest fires throughout the Iberian Peninsula, an issue that has been intensely discussed both in Portugal and in Spain since the nineteen-seventies. Portugal had already experienced a bout of forest fires in 2003, and was heavily criticised by the World Wildlife Fund for its forest management practices. In 2005, wwf launched a campaign to fight forest fires by planting the indigenous cork oaks in the region affected.

“This was a predictable fire,” says Joao Branco of Portugal’s environmental organisation Quercus. “The problem of eucalyptus and its connection to fires is well-known.”  Quercus are campaigning for the protection of the cork oak, which is well adapted to the forest fires that are a feature of the region. In fact, the cork oak is a passive pyrophyte, a plant specially suited to survive fire. The cork oak is protected by its thick bark, and its seeds are surrounded by resin.

While eucalyptus trees burn far more readily than cork oaks, they can quickly regenerate thanks to buds which are deep down under their bark, and their seeds are also well protected against fire. But in addition to their comparatively high resistance to blazes, these trees are also active pyrophytes – with their sap, which contains inflammable oils, they encourage the spread of fire. This gives eucalyptus communities an additional competitive edge over other trees and shrubs. And when the bark of these trees flies off during a blaze, it can start new fires up to 100 yards away.

Fires break out particularly frequently in the scrubland that used to be farmed by smallholders in the region. Much of this land was deserted after a widespread rural exodus, and some of it was turned into eucalyptus plantations. CELPA argues that growing eucalyptus is a much better fire protection approach than leaving scrubland behind that is no longer kept under control by livestock.

Pulpapernews, the leading international news portal for the paper and pulp industry, casts doubt on such claims. Eucalyptus oil is classified as a fire hazard in Australia, and the newsletter states that the tree’s oil slows the decomposition process of tree litter, which further increases the potential for fire. In Australia, pulpapernews maintains, there is so much vaporised eucalyptus oil in the air above the forests on hot days that it creates a blue haze. And it mentions “recorded instances where trees have exploded into flame”.

Ethiopia has the largest area of eucalyptus plantations in East Africa. The tree was introduced in the 1890s to meet a rising demand for construction poles in the county’s capital of Addis Ababa and to maintain firewood supplies. However, concern over “potential negative environmental externalities” prompted Tigray Regional Government to impose a ban on eucalyptus tree planting in 1997. The measure was also aimed at reserving more land for crop growing.

In Brazil, vast eucalyptus plantations for the pulp industry are putting increasing pressure on the remaining 15 per cent of the country’s Atlantic Forest, which is still a global biodiversity hotspot. Brazil is the world’s chief exporter of cellulose derived from eucalyptus. Already in 2004, a report by the country’s Ministry of Environment warned that the displacement of native forest with eucalyptus was a major driver of desertification in the region. Eucalyptus plantation fires could have a devastating effect on what is left of the Atlantic Forest. Unlike in Portugal, fires are not a feature of the landscape, and its tree communities are not specially adapted to the flames.