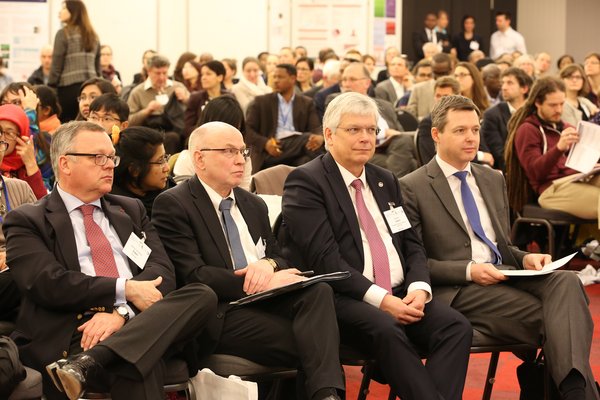 At the opening session of the conference on hidden hunger in Stuttgart-Hohenheim.
Photo: © Universität Hohenheim

Participants at the 3rd Hidden Hunger Conference, held in Stuttgart/Germany in March, called on politicians to at last assume responsibility. The event focused on food diversity and an improved nutrition status for the poor population in particular.

The share of people going hungry has significantly dropped over the last 25 years. Whereas in 1990, 23 per cent of the world population were affected by hunger, this is now the case for just 11 per cent. However, every third human being continues to suffer from hidden hunger. Fortification, supplementation and food diversification are just three of several approaches with which scientists and practitioners are attempting to combat hidden hunger. The 3rd Hidden Hunger Congress, which took place in Stuttgart, Germany, from the 20th to the 22nd March, looked at the different methods. But above all, the participants called on politicians to assume responsibility.

“I believe it is within our reach to end hidden hunger,” stated Shawn Baker of the Bill & Melinda Gates Foundation at this year’s Hidden Hunger Conference. But despite a number of powerful tools, hunger continued to be an urgent development problem which Baker went as far as to call “a political failure”. Politicians had made enough empty promises. “Political leadership needs to translate into financial commitments,” Baker demanded, and mentioned the implementation of the Scaling-up Nutrition Initiative (SUN) in Côte d’Ivoire as an encouraging example.

Politicians have to take preventive Action

Joachim von Braun from the Center for Development Research (ZEF) also stressed the role of politics in combatting hidden hunger and hunger in general. In particular, corruption, violence and political instability were significant factors with dramatic consequences for the food security of the population affected or the hunger it was suffering. This could be observed in Eastern Africa, North East Nigeria, Yemen and a few other places. “These are neglected issues,” von Braun said. I am very pleased to note that only recently, key international agencies such as the World Bank have taken on this issue. For decades, they have excluded investment action in so-called failed or fragile states.” Today, around a quarter of all people suffering hunger are living in these fragile states.

Thomas Silberhorn, Parliamentary State Secretary of the German Federal Ministry for Economic Cooperation and Development (BMZ), agreed that there was no doubt that politicians had a responsibility to address the issue of hunger. At the conference, Silberhorn stressed that the BMZ was providing 1.5 billion euros from its budget for the field of agriculture and food, also via the One World without Hunger programme, for hunger and poverty continued to be among the greatest challenges politicians were facing. However, they had to take more preventive action rather than merely responding in the event of a famine, he said, referring to the current crisis in Eastern Africa. “As the international community, we ought to be better prepared for such emergencies,” Silberhorn noted.

Friedrich Wacker of the German Federal Ministry of Food and Agriculture (BMEL) stressed its contribution to capacity building in partner countries. For example, it was supporting agroforestry in Zambia and assisting Ethiopia in examining food physiological qualities or the resilience of local cultures towards aridity, factors that were of importance to people’s food provision. “These measures are also contributing to combating malnutrition,” Wacker said.

“Food systems have to become more nutrition sensitive,” Matin Qaim of Germany’s University of Göttingen demanded. “In the past, we focused too much on staple grains, but we know this focus is problematic from a micronutrient perspective.” However, more crop diversity did not automatically result in more dietary diversity and hence better food. Such a conclusion was deceptive and only applied on the assumption that smallholder farmers really ate everything they were growing. “But we don’t have pure subsistence farms anywhere in the world,” Qaim noted. “Smallholders also purchase some of their food. And for purchasing food, you need cash income.” While farming activities were one source of such income, much of it was also off-farm income. And he explained that almost all farms had some sort of off-farm income.

Qaim maintained that the reason for what he viewed as the wrong assumption that crop diversity meant dietary diversity was a poor data base. Areas referred to in the data gathered so far had differed too much. Data from farm surveys and data from household and consumer surveys from very different regions and households could not simply be correlated.

It was not crop diversity in the field or in animal husbandry that played a decisive role in dietary diversity but proximity to the market. This was the result of a survey conducted by Qaim at the University of Göttingen. A total of 8,230 households were examined in Indonesia, Ethiopia, Kenya and Malawi. One of the most remarkable results was that the highest household dietary diversity (HDDS) could be found in Indonesia, where on-farm diversity was at its lowest. This was exactly the other way round in Ethiopia.

The survey also demonstrated that the distance of the households from the markets was relevant to dietary diversity. “Diversity is good, but more diversity is not better,” stated Qaim, adding however that a certain degree of diversity at farm level could make sense as a risk prevention measure that also had ecological benefits. But too much diversity can obstruct market opportunities, the study concludes. Setting out from its results, Qaim demanded: “You should abolish policy biases towards staple grains, strengthen markets for neglected food products, and let smallholders react to market incentives.”

Alongside dietary diversity, fortification and supplementation constituted the second guiding thread at the event. Taking the example of vitamin A supplementation for children, Rolf Klemm of Helen Keller International demonstrated the problems this approach entails. Vitamin A deficiency still persists in Sub-Saharan Africa and South Asia, whereas it has been reduced considerably in South East Asia.  Klemm explained that in Africa too, there had been major reductions in vitamin A deficiency among children up to a couple of years ago. Klemm explained that the reason for the renewed rise in vitamin A-deficiency was that vitamin A had been administered together with polio vaccination. Because of the rapid drop in incidents of polio in Africa, there were fewer vaccinations. “Vitamin A no longer has a vehicle to ensure coverage,” Klemm concluded.

Klemm also tends to view the supply of micronutrient powders to supplement food sceptically, although this practice is now applied in half the countries world-wide. But it is expensive and is not affordable for low-income consumers. He demands that inputs should be given less attention and that the focus should be more on processes. And above all, the know-to-do gap has to be bridged.

For more information on the Hidden Hunger Conferences