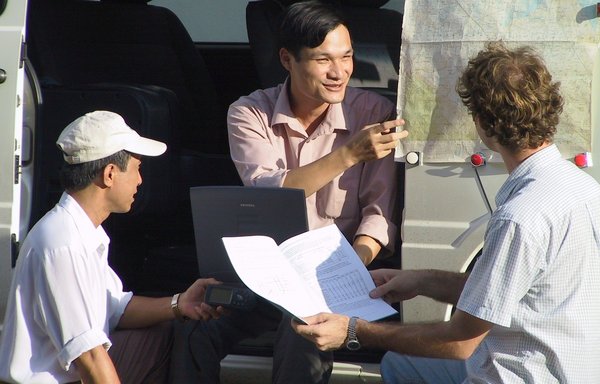 12th Conference of the Parties of UNCCD

At the 12th Conference of United Nation Convention to Combat Desertification (UNCCD) in October this year, the role of UNCCD in the context of sustainable land and soil management has been strengthened. Germany hosts the secretariat of UNCCD and since 2011 also the secretariat of the Economics of Land Degradation (ELD).

The United Nation Convention to Combat Desertification (UNCCD) which was adopted in 1994 is one of the three Rio Conventions (the others being UNFCCC and CBD). Germany is not only member of the UNCCD (with BMZ as focal point) but also hosts the secretariat of the UNCCD, which is based in Bonn. The GIZ sector project to combat desertification (CCD) has been supporting BMZ since 1995 in its role as host, and by giving advice on all issues related to desertification, land degradation and sustainable land management. Since 2011, the CCD project also hosts the secretariat of the Economics of Land Degradation (ELD) Initiative.

The role and mandate of UNCCD is to promote sustainable land management (SLM) and to fight land degradation in drylands (desertification). Especially for Africa, the focus on drylands has been important, given that about 50 per cent of its landmass are drylands. About 65 per cent of African agricultural land is already degraded to some degree, affecting at least 485 million people.

However, land degradation as a global problem has come to be recognised increasingly – culminating in its inclusion in many of the goals of the 2030 Agenda for Sustainable Development and especially its target 15.3, quoting “By 2030, combat desertification, restore degraded land and soil, including land affected by desertification, drought and floods, and strive to achieve a land degradation-neutral world”.

The 12th Conference of the Parties (COP) of UNCCD took place in October in Ankara, Turkey, with about 4.000 participants. During two weeks, 23 decisions were negotiated and adopted. In general, it can be stated the decisions taken will increase the political relevance of the UNCCD considerably.

For the first time, UNCCD has agreed upon a common target – land degradation neutrality (LDN) – and the parties have recognised the role UNCCD will be able to play for global environmental and development policy processes. The commonly adopted universal definition of LDN reads: Land degradation neutrality is a state whereby the amount and quality of land resources necessary to support ecosystem functions and services and enhance food security remain stable or increase within specified temporal and spatial scales and ecosystems. Member countries of UNCCD should now engage in the formulation of voluntary national targets for LDN and in their implementation. Commissioned by BMZ, the GIZ CCD project engages in piloting LDN implementation in Namibia and potentially also Costa Rica.

Synergies of the Rio Conventions

The COP-12 decisions also strengthen the synergies between the conventions UNFCCC, CBD and UNCCD. While it is quite obvious that there is a nexus between land based mitigation and adaptation, biodiversity conservation, sustainable land management and land rehabilitation, the practical implementation of the conventions’ synergies have been lacking behind. In Ankara, great potential for intensifying the cooperation between the three convention secretariats was seen, among others, in the utilisation of common land based indicators, such as trends in land cover, trends in land productivity and trends in carbon stocks above and below ground. Also, leveraging climate finance funding for activities related to SLM and land rehabilitation will be targeted by the UNCCD secretariat.

In order to improve the scientific knowledge-base for political decision-making at national and international scale, UNCCD had formed a Science-Policy Interface (SPI) in 2013. Some structural and format improvements to increase the efficiency of scientific advice to UNCCD were adopted, as well as an ambitious work programme for the next two years. The key work areas of the SPI will consist in underpinning the implementation of national voluntary LDN targets scientifically, and further exploring the contribution of sustainable land management and rehabilitation to climate change adaptation and mitigation.