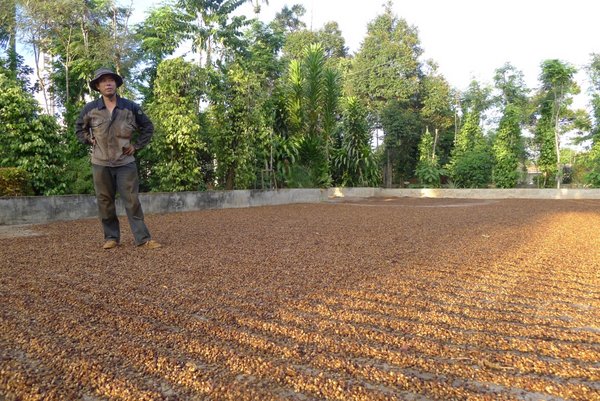 The world is drinking more coffee, with demand likely to rise almost 25 per cent in the next five years according to the international coffee association. Vietnam is the second largest coffee producer in the world and a leading Robusta coffee exporter.

Water demand has increased considerably in the Central Highlands of Vietnam over the past decades due to the considerable increase in coffee production. Coffee production in Vietnam heavily relies on irrigation during the dry season, mainly from groundwater, leading to numerous shallow wells running dry. This is posing threats to sustainability of local groundwater management and to Vietnamese Robusta coffee production at large.

In this context, a public-private development partnership between Nestlé (Nescafe) and the Swiss Agency for Development and Cooperation (SDC) promotes water-smart coffee production with training of 50’000 farmers, scientific research and awareness raising initiatives for better water use to small holder farmers.

The public-private partnership started with a research project in 2011 assessing the water footprint (WFP) of coffee production in order to improve understanding of water consumption and its optimisation in the specific situation of Robusta coffee in Vietnam. The project, implemented by the International Water Management Institute (IWMI), Embden, Drishaus and Epping Consulting (EDE) and the Western Highlands Agriculture and Forestry Sciences Institute (WASI), demonstrated the feasibility of reducing irrigation water while maintaining or even increasing coffee yield through better irrigation management and agronomic practices.

According to the research findings, Vietnamese coffee farmers should reduce irrigation by one-third during the dry season to ease pressure on groundwater and increase profits. By the end of the research phase in 2014, project manager Dave D’haeze (EDE Consulting) said: “the project has generated enormous momentum in the industry. Nestlé and SDC committed to a five-year partnership programme to support the dissemination of research results to 50,000 coffee farming households in Vietnam. The programme also actively works on a communication strategy to raise more awareness among industry players, standards programmes and public institutions both in Vietnam and internationally.”

Recently the Public Private Development Partnership programme between SDC and Nestlé activated a hydro-geological study to better understand risks and opportunities related to local groundwater resources and their use in the largest Vietnamese coffee growing province Dak Lak.  The results of the study were presented at an international stakeholder conference in March 2016 and revealed how excess irrigation water for Robusta production is temporarily trapped in the soil and no longer available for use during the dry season. The lead researcher of the study, Ellen Milnes from the Swiss “Center for Hydrogeology and Geothermics of Neuchatel” (CHYN), summarised the study findings by saying: “The good news is that in our study we did not observe any long-term declining groundwater level trends. However, the groundwater level decline caused by excess irrigation of coffee during the dry season leads to drying up of shallow wells in many locations.”

The fact that water gets lost in the dry season because of excessive irrigation for coffee has not only implications on coffee production and the income of coffee farmers, but also endangers water availability for household consumption, irrigation of other crops and energy supply. Therefore the study needs to be seen within the wider socio-economic context of Dak Lak province and the Vietnamese Central Highlands.

In his closing speech, the director of the National Agricultural Extension Center, Dr. Pham Huy Thong, stressed the importance of turning the study findings into immediate practical implementation through awareness raising for coffee farmers on rational water use in order to secure water for all users in the Central Highlands.

The public private partnership between SDC and Nestlé will continue to engage and support different activities to promote and upscale the application of the best irrigation practices in order to save water resources and make coffee production more profitable for the small scale farming households.