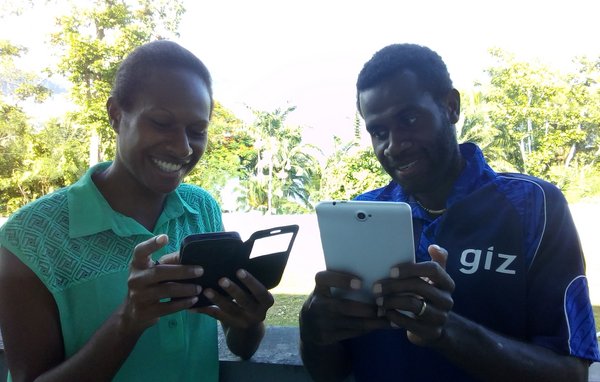 A GIZ expert instructs a young woman how to use the smartphone app.
Photo: GIZ

The Pacific Islands are particularly hard hit by climate change. Smartphone apps are helping people there to protect themselves from natural disasters.

Many island states in the Asia-Pacific region are feeling the impacts of climate change particularly strongly. Large numbers of islanders earn their living from agriculture or fishing, and this makes them especially vulnerable to extreme weather events like cyclones, floods or droughts.

On behalf of the German Federal Ministry for Economic Cooperation and Development (BMZ), Deutsche Gesellschaft für Internationale Zusammenarbeit (GIZ) GmbH is working with 15 island states that wish to protect themselves from the effects of climate change. Preparing local people better for extreme natural events is part of this.

In co-operation with network operator Digicel and the United Nations, GIZ has developed a mobile phone quiz with more than 40 multiple-choice questions for the citizens of the island state of Vanuatu, which is particularly at threat from disasters. Text messaging was used to inform residents on even the most isolated islands about climate change and explain how they can protect themselves and their harvests from storms and floods. They also learned how to lay stocks by for emergencies, provide secure shelter for their livestock and plant fast-growing cereal crops. When the severe cyclone 'Pam' struck Vanuatu in 2015, many of the 70,000 people who had completed the quiz were able to draw on this knowledge.

Immediately after the storm, those affected could use a special smartphone app adapted for the purpose by GIZ and the Ministry of Agriculture to report on their situation regarding supplies. The government was then able to arrange emergency aid for a total of 108,000 people spread over 22 islands that precisely reflected their needs, and dispatched helpers first to the regions that had suffered the greatest storm damage. Other smartphone apps were used to collect information on food supplies in the areas affected. The app is now also functioning as an early warning system for agriculture: information on the current status of agricultural production is collected regularly across the entire group of islands and evaluated.

Climate change mitigation and emergency preparedness on the Pacific Islands is funded partly by the European Union. The next steps will be to equip Vanuatu with a national early warning system for natural disasters and install three new weather stations.