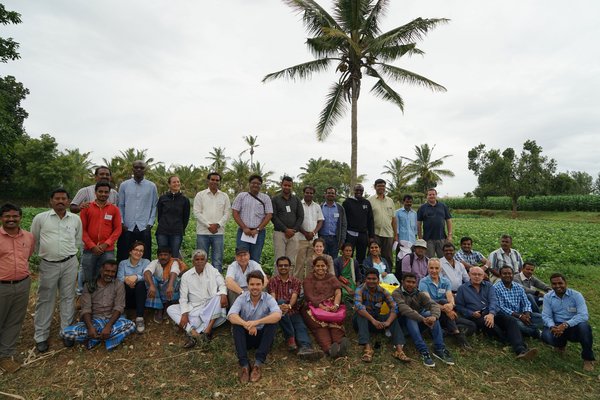 As part of the global programme “Green Innovation Centres in the Agriculture and Food sector” of the German “One World No Hunger” initiative, DLG organised the first workshop on “optimising value chains – potatoes” in the Indian state of Karnataka.

A total of 38 participants coming from five countries took part in the workshop “optimising value chains – potatoes”, held in Hassan, Karnataka, India, from 10-15 July 2017. Organised by the German Agricultural Society (DLG) together with “Deutsche Gesellschaft für Internationale Zusammenarbeit” (GIZ), the event was also attended by representatives from the Indian Ministry of Agriculture and Farmers Welfare, the International Potato Centre (CIP) India, Indian research institutions as well as implementing partners such as AFC/ETC consultants and Welthungerhilfe.

This workshop is part of the global programme “Green Innovation Centres in the Agriculture and Food sector” of the One World No Hunger initiative run by the German Federal Ministry for Economic Cooperation and Development (BMZ). DLG acts as a strategic partner on behalf of the Green Innovation Centres and co-ordinates the working group potato. The group itself consists of 23 members from eight countries.

Training and visits to farms and production units

At the workshop in India, the participants from Tunisia, Kenya, India, the Netherlands and Germany gained insights into the entire value chain. Starting with the application of aeroponics in Indian seed production, a cold storage for seed potatoes, farmers and innovation farms were visited. The Indian farmers discussed their innovations for increasing productivity in the field with the international group of experts. On the innovation farms, they had tested six new seed varieties two of which are significantly appropriate for the local agricultural and climate conditions. Other tests with innovations are still running.

The University of Wageningen (the Netherlands) trained the group in theory and practice of efficient late blight management for two days. Late blight (Phytophthora infestans) is a fungicidal disease which causes harvest losses in the countries represented of 40 to 60 per cent each year on average. Once it has broken out, this airborne disease cannot be treated, although its progress is stoppable. Beside getting to know the living conditions of the fungus, participants learnt how to choose the right spraying nozzles and spraying positions and how to distinguish between good and less effective sprayers.

Activities of the international working group potato, co-ordinated by DLG

Moreover, the group has shared the Farmer Business School (FBS) approach, which is in use in Nigeria and has already been adopted in Mali, while Cameroon is about to use it. At the FBS, farmers get trained in entrepreneurial modules and in good agricultural practices. In addition, the Kenyan team has developed business models which are shared with the group.

In addition to knowledge transfer on good agricultural practices and lessons learnt as well as the development of training material, the working group is compiling a monograph of the seven countries and establishing an online communication platform.

This year, working group meetings were run in India in July and are to take place in Kenya in November 2017. The DLG is responsible for co-operation on subject issues and moderating the working group.