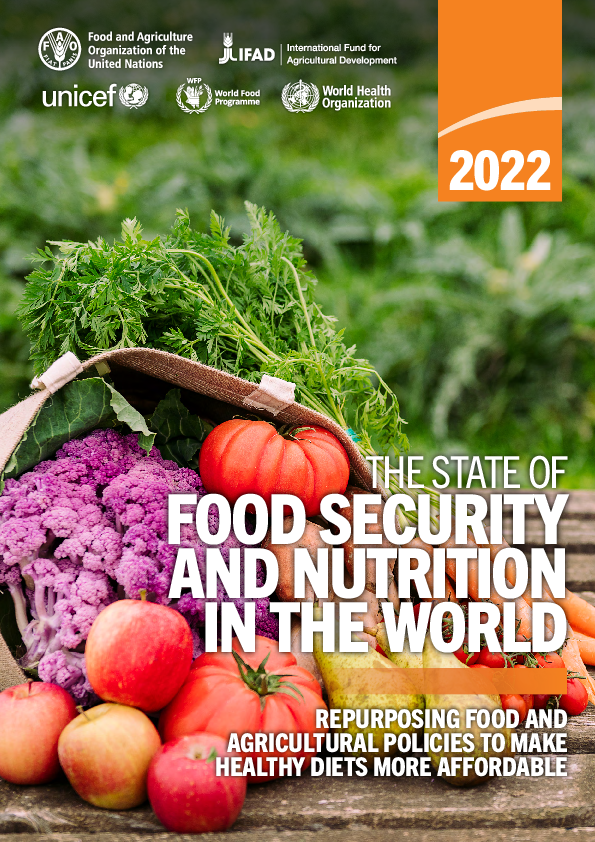 The State of Food Security and Nutrition in the World 2022

The report provides fresh evidence that the world is moving further away from its goal of ending hunger, food insecurity and malnutrition in all its forms by 2030.

The number of people affected by hunger globally rose to 828 million in 2021, an increase of about 46 million since 2020 and 150 million since the outbreak of the COVID-19 pandemic. This is the latest data from The State of Food Security and Nutrition in the World (SOFI) report, jointly published by the Food and Agriculture Organization of the United Nations (FAO), the International Fund for Agricultural Development (IFAD), the United Nations Children's Fund (UNICEF), the UN World Food Programme (WFP) and the World Health Organization (WHO) in July 2022.

After remaining relatively unchanged since 2015, the proportion of people affected by hunger jumped in 2020 and continued to rise in 2021, reaching 9.8 per cent of the world population. This compares with 8 per cent in 2019 and 9.3 per cent in 2020. Around 2.3 billion people in the world (29.3 per cent) were moderately or severely food insecure in 2021 – 350 million more than before the outbreak of the COVID 19 pandemic. Nearly 924 million people (11.7 per cent of the global population) faced food insecurity at severe levels, an increase of 207 million in two years.

Looking forward, projections are that nearly 670 million people (8 per cent of the world population) will still be facing hunger in 2030 – even if a global economic recovery is taken into consideration. This is similar to the number in 2015, when the goal of ending hunger, food insecurity and malnutrition by the end of this decade was included in the 2030 Agenda for Sustainable Development.

As the report was being published, the ongoing war in Ukraine, which involves two of the biggest global producers of staple cereals, oilseeds and fertiliser, was – and still is – disrupting international supply chains and pushing up the prices of grain, fertiliser and energy as well as ready-to-use therapeutic foods for children with severe malnutrition. This comes as supply chains are already being adversely affected by increasingly frequent extreme climate events, especially in low-income countries, with potentially sobering implications for global food security and nutrition.

The report notes as striking that worldwide support for the food and agricultural sector averaged almost USD 630 billion a year between 2013 and 2018. The lion’s share goes to individual farmers as a result of trade and market policies and fiscal subsidies. However, not only does much of this support lead to market distortions, it also fails to reach many farmers, hurts the environment and does not promote the production of nutritious foods that make up a healthy diet. This is partly because subsidies often target the production of staple foods, dairy and other animal source foods, especially in high- and upper-middle-income countries. Rice, sugar and meats of various types are the most incentivised food items worldwide, while fruits and vegetables receive relatively little support, particularly in some low-income countries.

With the threat of a global recession looming and the impact this is likely to have on public revenues and expenditures, one way to support economic recovery would be to repurpose food and agricultural support in favour of nutritious foods whose per capita consumption does not yet match the recommended levels for healthy diets.
The evidence suggests that if governments repurpose the resources they are currently using in order to incentivise the production, supply and consumption of nutritious foods, they will contribute to delivering lower cost foods and affordable healthy diets for all, sustainably and inclusively.

Finally, the report also points out that governments could do more to reduce trade barriers on nutritious foods, such as fruits, vegetables and pulses.